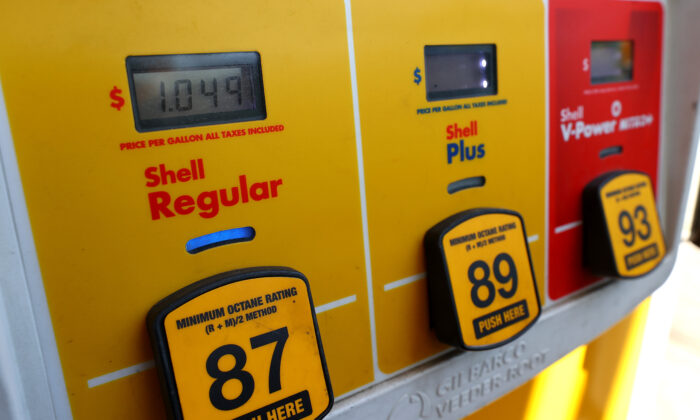 A gas pump is shown on May 07, 2020 in Baltimore, Maryland. (Rob Carr/Getty Images)
Local News

New Jersey Department of Treasury announced on Tuesday that the gas tax rate in the state will decrease by 8.3 cents per gallon beginning Oct. 1. It is the first gas tax reduction since its inception in 2016.

The law enacted in 2016 in New Jersey imposed a tax on gasoline and diesel fuel purchases by motorists to generate funding for maintenance and improvement of the state’s roadways and bridges. The tax has been expected to provide $16 billion over eight years.

The law dictates that the gas tax rate must be adjusted each year in order to generate roughly $2 billion per year, according to a statement by the state department of treasury.

The rate adjustment is made annually by the state government upon reviewing the actual gas tax revenue collection and the projection of fuel consumption for the current fiscal year.

The tax rate can be increased if there was a shortfall in meeting the tax revenue goal during the prior year or if the fuel consumption estimated for the current year will be insufficient to reach that goal.

Likewise, if in the prior year the government collected more taxes than required by the law or the estimated fuel consumption is higher than the amount needed to achieve the target, the tax rate can be lowered.

Last year, the state officials predicted for 2021 a decline of fuel consumption by about 20 percent from the target required by law, according to an analysis paper by the state Department of Treasury. Also, the last year’s actual gas tax revenue was $154 million below the target due to state-wide restrictions related to the pandemic caused by the CCP (Chinese Communist Party) virus.

This summer, the New Jersey government estimated that the fuel consumption will be only about 14 percent below the target level prescribed by the law, and the actual gas tax revenues exceeded the estimate by nearly 3 percent, according to the paper.

Therefore the State of New Jersey made a decision to lower the gas tax rate, the state Treasury said in the statement.

Currently, the gas tax in New Jersey reached 50.7 cents and this is the fourth-highest rate in the nation, according to the Tax Foundation.

New Jersey Treasurer Elizabeth Maher Muoio said in the statement, “Because actual consumption in Fiscal Year 2021 was so closely in line with our projections made last August, coupled with the fact that consumption in the current fiscal year is projected to be above last fiscal year’s levels, our analysis of the formula dictates an 8.3 cent decrease this coming October.”

New Jersey Assemblywoman Serena DiMaso (R) noted in a statement that the gas tax hike of 9.3 cents which was made in 2020 was unusually high.

“The gas tax was raised only $4.3 cents in 2019 to fill a $125 million deficit. The deficit last year was $156 million. A one-cent increase is typically akin to roughly $50 million in tax revenue. Depressed traffic due to Covid-19 changed revenue estimates, which were undershot by nearly $60 million,” New Jersey Republican Assembly members said in the statement.

“Treasury is saying their projections were on point because they projected a major gas tax cut before the election,” alleged DiMaso, a member of the Assembly Budget Committee.

The Epoch Times reached out to New Jersey Department of the Treasury for comments.

A gubernatorial election is set to take place in November this year, where the incumbent Democratic Governor Phil Murphy will run for re-election against Republican Jack Ciattarelli, a former New Jersey Assemblyman.