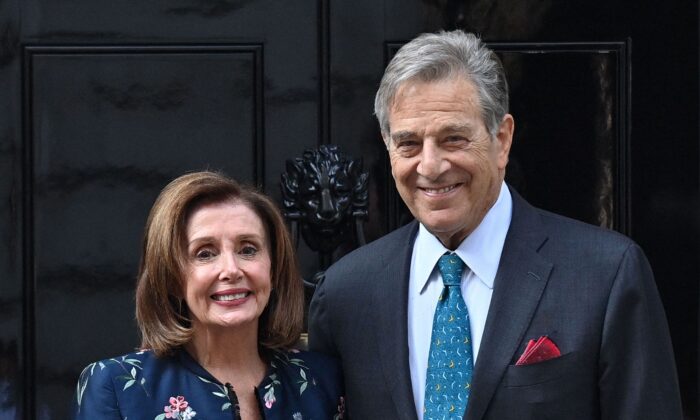 David DePape, the man accused of attacking House Speaker Nancy Pelosi’s husband with a hammer last week in the couple’s California home, has been “mentally ill for a long time,” according to a woman who identified herself as DePape’s former life partner.

“Hello, this is Gypsy Taub. I am the ex-life partner of David DePape and the mother of his children,” Oxane “Gypsy” Taub told the local media outlet over the weekend. “He is mentally ill. He has been mentally ill for a long time.”

Taub, who noted that the pair had two sons before they split seven years ago, said that DePape at one point disappeared for about a year. When he resurfaced, Taub said, he believed he was Jesus Christ.

“He came back in very bad shape. He thought he was Jesus. He was constantly paranoid, thinking people were after him. And it took a good year or two to get back to, you know, being halfway normal,” Taub told ABC7.

Taub said DePape had never been particularly involved in politics, but she described herself as a progressive. However, she said DePape appeared to share her left-wing views when they were involved.

“When I met him, he was only 20 years old, and he didn’t have any experience in politics, and he was very much in alignment with my views, and I’ve always been very progressive. I absolutely admire [Democrat House Speaker] Nancy Pelosi,” she said, noting that she sends her “deepest apology” to the Pelosi family.

Meanwhile, journalist Michael Shellenberger wrote that he went to the alleged home of DePape in Berkeley, a city located near San Francisco that has long been a hotbed of progressive activism.

“And, as I discovered yesterday, DePape lived with a notorious local nudist in a Berkeley home, complete with a Black Lives Matter sign in the window and an LGBT rainbow flag, emblazoned with a marijuana symbol, hanging from a tree. A closer look reveals the characteristics of a homeless encampment,” he wrote for Substack.

Neighbors told him that “people come and go from the house and the vehicles, neighbors say, in part to partake in the use of a potent psychedelic drug, ibogaine,” Shellenberger wrote.

A woman named Trish told him that people who live at the home are very left-wing—”very radical” even.

“What I know about the family is that they’re very radical activists,” she told him. “They seem very left. They are all about the Black Lives Matter movement. Gay pride. But they’re very detached from reality. They have called the cops on several of the neighbors, including us, claiming that we are plotting against them. It’s really weird to see that they are willing to be so aggressive toward somebody else who is also a lefty.”

Democrats, including President Joe Biden, were quick to link the alleged assault to Republicans, former President Donald Trump, and the Jan. 6, 2021, Capitol breach. Biden said at a fundraising event in Pennsylvania on Oct. 28 that the attacker allegedly used the “same chant” as individuals who breached the Capitol.

It isn’t clear if the alleged Pelosi attacker uttered those words. Media reports, citing anonymous sources, claimed that the suspect made that statement during the incident.

San Francisco Police Chief William Scott said the attack was intentional and not random. Authorities said officers responded to a well-being check at the Pelosi home at 2:27 a.m. on Oct. 28.