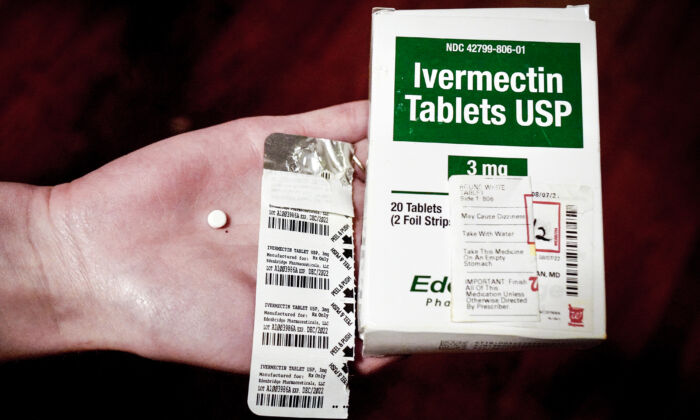 The U.S. Food and Drug Adminstration has warned against taking Ivermectin for COVID-19, because it is "horse medication." However, Ivermectin packaged for human use (as shown here) has been widely prescribed for decades for a range of maladies, including for treatment of lice, other parasites and viruses. (Natasha Holt/The Epoch Times)
US News

New Hampshire is poised to become the first state in the United States to make Ivermectin available as an over the counter medication and sanction it as a protected treatment for COVID-19, under a bill before the House Health, Human Services, and Elderly Affairs Committee.

While similar bills proposed in three other states have been ill received, the primary sponsor of the New Hampshire bill told The Epoch Times she expects a slightly amended version to garner enough votes from the Republican majority committee to send it for approval to the GOP-controlled House of Representatives.

The House has already shown support for other COVID-related bills including statewide bans against both government and private-imposed mandates related to the virus.

“I have absolutely no doubt lives will be saved if human grade Ivermectin was available to COVID patients,” state Republican Rep. Leah Cushman, also a registered nurse, told The Epoch Times about her proposed bill HB3005.

But Dr. David Levine of Dartmouth-Hitchcock Medical Center said that prescribing Ivermectin is “dangerous and totally out of line with standard of medical care around the world.”

“I would never want this medication prescribed to myself or my family and would take legal action against anyone who recommended this to my loved ones,” Levine wrote in his written testimony on the bill.

Dr. William Palmer, governor of the New Hampshire Chapter of the American College of Physicians, who also submitted written testimony on the bill, said he was concerned that if passed it would have the potential to overwhelm the state’s health care system with cases of “Ivermectin-induced side effects.”

Dr. Paul Marik, neurocritical care doctor who has published more than 600 peer review papers in his field, testified that Ivermectin, “is one of the safest drugs on the face on this planet.”

According to Marik human-grade Ivermectin is approved for the treatment of viruses in 79 countries.

Quoting the World Health Organization’s own data, Marik pointed out that 3.7 billion doses have been dispensed to humans since its discovery in 1987 as an anti-parasitic drug.

“So somehow Japanese people, Indian people, Brazilian people can tolerate it safely but it’s toxic in Americans. You have to be kidding,” Marik said.

Marik, who is a co-founder of the physician-comprised advocacy group Front Line COVID-19 Critical Care Alliance (FLCCC), recently resigned from his position at the Eastern Virginia Medical School over his legal battles with the hospital for treating COVID patients with Ivermectin and other alternative medications.

He faced disciplinary action by medical licensing boards for promoting alternative treatments of other diseases.

Marik cited several studies in his testimony that he said definitively proved Ivermectin has both viricudal and anti-inflammatory properties and that it has already been treated successfully used to treat deadly diseases like the mosquito-borne Zika virus and other similar viruses to the SARS-CoV-2 RNA viruses that causes COVID-19.

The New England Journal of Medicine recently published a study entitled “Review of the Emerging Evidence Demonstrating the Efficacy of Ivermectin in the Prophylaxis and Treatment of COVID-19.”

“[Ivermectin] kills the virus so any assumption it doesn’t is false propaganda,” said Marik.

Cushman told The Epoch Times that in an effort to appease some concerns expressed about the bill she has submitted amendments to it include notices with any dispensary for human use that it is considered an “off label” use for treating COVID and also to create a state tracking system of any adverse reactions experienced by anyone who takes human-grade Ivermectin.

As it is now Ivermectin, which has been touted by a number scientific studies both in the United States and abroad as an effective treatment of COVID-19, is currently available as an anti-parasitic treatment for animals.

To obtain pharmacy-grade Ivermectin, Americans have to either order it from an on-line pharmacy in another country or get a prescription from a doctor.

Several U.S. doctors who have prescribed Ivermectin for COVID patients have either already had their licenses stripped or been suspended.

In Florida and Arizona, two COVID patients died after their families lost legal bids to force hospitals to treat their loved ones with Ivermectin.

A bill similar to the New Hampshire proposal was recently introduced in Indiana before it’s mostly Republican Health Committee, However, the bill drew an overwhelming amount of criticism from state medical officials who called it dangerous.

“This bill would set a dangerous precedent by having the government substitute its own medical advice for that of a trained, health care professional,” vice president of the Indiana Pharmacists Association Darren Covington stated in written testimony against the bill.

Wisconsin physician Pierre Kory, among the few to testify in support of the Indiana bill, estimates that a treatment that includes Ivermectin could reduce COVID-19 deaths by about 75 percent.

In October, Arizona Republican Senator Kelly Townsed introduced a bill that would ban pharmacists from refusing to fill Ivermectin for “off-label” use during public health emergencies.

Earlier in Pennsylvania, GOP Rep. Dawn Keefer introduced a bill that would allow doctors to write prescriptions of Ivermectin as well as hydroxychloroquine sulfate for the treatment of COVID-19.

Neither bill has yet to leave committee.

In Alaska, lawmakers have discussed the idea for a bill that promotes Ivermectin as a treatment for COVID, but so far no bill on the issue has been introduced in the Last Frontier state.