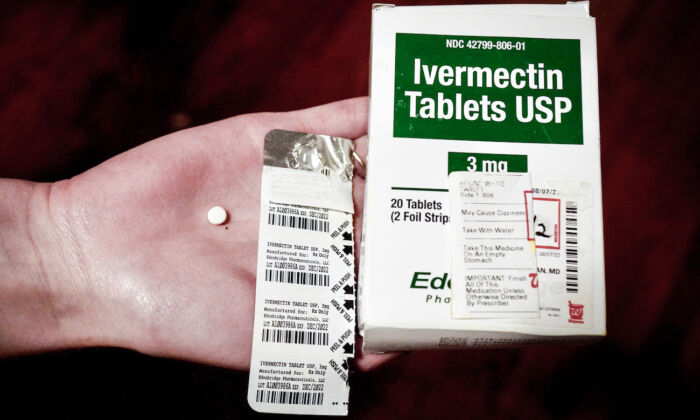 New Hampshire Gov. Chris Sununu has vetoed a bill that would have made ivermectin available in the state without a prescription.

The Republican governor vetoed the bill on June 24, the same day that the U.S. Supreme Court overturned Roe v. Wade. Some fellow Republicans questioned the timing.

“It certainly seemed like a convenient way to bury a veto of a bill that won support from the vast majority of Republicans in New Hampshire,” J.R. Hoell, co-founder of the conservative watchdog group RebuildNH, told The Epoch Times.

Hoell is a former four-term House Republican who plans to seek reelection after a four-year hiatus from the New Hampshire Legislature.

Earlier this year, the New Hampshire Department of Children Youth and Family tried to take custody of Hoell’s 13-year-old son after a nurse reported him for giving human-grade ivermectin to the teen months earlier.

Several states have introduced bills to make human-grade ivermectin available without a prescription at brick-and-mortar stores. Currently, it can be ordered online from another country. In April, Tennessee became the first state to sign such a measure into law. New Hampshire lawmakers were first to introduce the idea.

Both chambers of the state’s Republican-controlled Legislature approved the bill.

In his statement explaining the veto, Sununu noted that there are only four other controlled medications available without a prescription in New Hampshire and that each was only made available after “rigorous reviews and vetting to ensure” before being dispensed.

“Patients should always consult their doctor before taking medications so that they are fully aware of treatment options and potential unintended consequences of taking a medication that may limit other treatment options in the future,” Sununu said in his statement.

Sununu’s statement is very similar to testimony given by Paula Minnehan, senior vice president of state government regulations for the New Hampshire Hospital Association, at hearings on the measure.

Minnehan also placed emphasis on the review that went into the four prescription medications the state made available under a standing order. They include naloxone, the generic name for Narcan, which is used to counter opioid overdoses, hormone replacement therapy drugs, and a prescription version of the morning-after pill.

It also includes a collection of smoking cessation therapy drugs such as Chantix, which has been linked to suicide, depression, and other neuropsychiatric conditions. Last year, Pfizer, the leading maker of the FDA-approved drug, conducted a voluntary recall of Chantix. Narcan has also been linked to deaths caused by severe withdrawals that have led to acute respiratory distress.

Rep. Melissa Blasek, a Republican co-sponsor of the New Hampshire ivermectin bill, told The Epoch Times that one could veto any drug-related bill under the pretense of overdose concerns.

“The reality is you can overdose on Tylenol,” she said. “Ivermectin has one of the safest track records of any drug.”

The use of human-grade ivermectin became controversial when some doctors began promoting it for the treatment and prevention of COVID-19. Government agencies including the FDA and CDC issued warnings against its use while groups such as Front Line COVID-19 Critical Care Alliance heavily promoted it.

Some doctors were disciplined for prescribing human-grade ivermectin for COVID-19 including a Maine doctor whose medical license was suspended by the state.

According to several published reports, 3 billion doses of human-grade ivermectin have been safely prescribed worldwide.

Though disappointed, Blasek said she wasn’t surprised by Sununu’s veto given his track record on other COVID-related bills including a bill born out of what some lawmakers saw as an overuse by Sununu of his ability to issue emergency orders under the pandemic. The measure sought to automatically expire the use of emergency orders by New Hampshire’s governor after the third use of the authority, making them renewable only upon approval by either the House or Senate.

Following his veto of the bill, Blasek referred to Sununu on social media as “a Republican suicide bomber with a veto pen.” In his criticism of the governor’s veto, Hoell said that “Governor Sununu should take a basic course in science before he vetoes a bill for medication safer than Tylenol.”

Sununu has also been heavily criticized by fellow Republicans for vetoing a bill that would have banned schools from instituting mask mandates and for pushing for the acceptance of $27 million worth of federal monies earmarked to promote the COVID-19 vaccine. During a hearing on the money in October 2021, eight New Hampshire residents who protested the acceptance of the money were arrested, most of them while they were sitting quietly in their seats.

The state dropped the case against them earlier this month without filing charges.