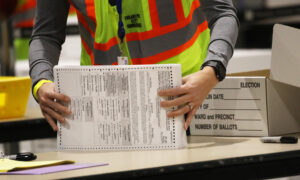 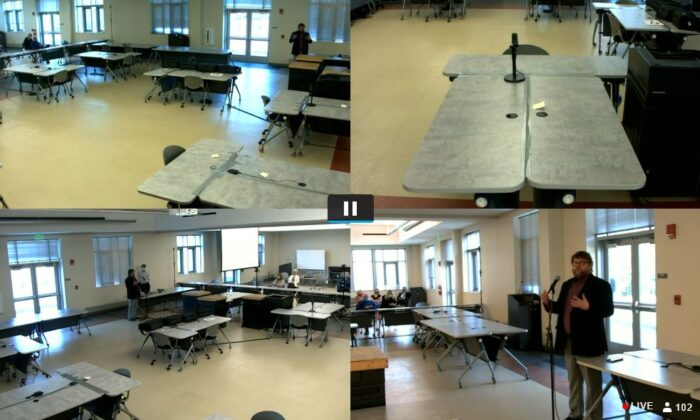 A 2020 election audit starts in Windham, N.H., on May 11, 2021. (New Hampshire Department of Justice via The Epoch Times)
Election Integrity

Election auditors Windham, New Hampshire, are saying that some of their latest findings are “large enough to account for discrepancies” in the Nov. 3 election results for four state representative seats.

Auditors said they found “experimental confirmation that if the contest is undervoted, a fold through a vote target can create a vote.”

“Something we strongly suspect at this juncture, based on various evidence, is that in some cases, fold lines are being interpreted by the scanners as valid votes,” Mark Lindeman, who is part of the audit team, told WMUR.

Harri Hursti, another auditor, wrote on Twitter that testing proved folded ballots were misinterpreted by machines.

“Test decks proved that foldings across a vote targets is misinterpreted as additional phantom votes or subtracts votes due to false overvotes,” he wrote in a post.

Auditors finished the hand recount on May 21. The audit began on May 11.

AccuVote didn’t respond to a request for comment about the audit authorization. The AccuVote machines’ intellectual property is owned by Dominion Voting Systems.

Windham’s four state representative seats were all won by Republicans on Election Night. The presidential election was not an item for this audit.

Democrat candidate Kristi St. Laurent, who lost by a narrow margin of 24 votes, requested an audit (pdf) claiming that the machines were improperly programmed, and that double voting was involved.

As a result, New Hampshire’s Republican Gov. Chris Sununu, signed a bill last month that gave authorization for forensic analysis and a comprehensive recount of the 2020 election votes in Windham related to optical scanning AccuVote machines.

An automatic recount was done, resulting in St. Laurent losing 99 more votes after a hand recount. Meanwhile, four Republicans gained about 300 votes each.

The audit team said that more issues could be involved besides folded ballots being misinterpreted.

“The fold effect is large enough to account for discrepancies, but might not be all that’s going on,” the team said on Twitter on May 22, adding that  “75 folded ballots voted straight Republican. Only 48 votes recorded for them. Folds generated overvotes. This is machine used on Election Day [for] most absentee ballots.”

Another machine was found to have “an even more dramatic problem” by the auditors, who said that only 28 percent of the votes for Republican candidates were counted.

“The work is not completed yet. While the folding seems to be a strong contributor it clearly is not the only factor,” Hursti said on Sunday. “For example: We have observed vastly different error rates on two machines processing the same ballots. Work continues.”