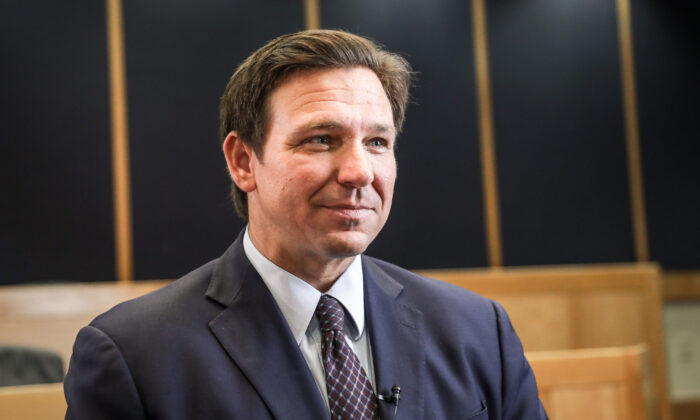 Florida Gov. Ron DeSantis is interviewed by The Epoch Times at Florida International University in Miami on May 24, 2021. (Samira Bouaou/The Epoch Times)
Florida

An emergency rule issued by Florida authorities on Friday bars issuing or renewing licenses for any entities that house illegal immigrant children.

Under the direction of Florida Gov. Ron DeSantis, the state Department of Children and Families (DCF) determined that the resettlement of such children does not meet the term “evidence of need” as defined by state law and amended the state’s administrative code to say as much while cracking down on licenses.

The move is required to protect the health, safety, and wellbeing of all children in the state being cared for by childcare entities, and in the absence of a cooperative agreement between the state and the federal government regarding the illegal aliens, the agency said.

Facilities that are already housing the children will be able to keep housing them but will face stricter regulations.

DeSantis has been on of President Joe Biden’s top opponents, criticizing the Democrat primarily for his lax immigration enforcement policies.

Biden has presided over the most illegal immigrant apprehensions at the southern border in history in a single fiscal year and calendar year, after ending or altering key Trump era provisions like construction on the border wall and the “Remain in Mexico” program.

Florida officials noted that the Biden administration has released tens of thousands of illegal immigrants into the U.S. interior without a court date, flouting U.S. law. They have also accused the administration of secretly flying illegal immigrant children into Florida, including 78 flights with an average of 36 children on each flight between June and September.

“These individuals were collectively transported on buses and dispersed to various locations in Florida,” DCF said.

A White House spokesman did not return a request for comment.

DeSantis on Friday also announced new legislative proposals aimed at combating the surge in illegal immigration, including barring companies involved in transporting illegal immigrants to Florida from getting contracts from any state or local government agency inside Florida, and making any entity involved in the transportation pay the state restitution.

Jacksonville Sheriff Mike Williams, a Republican, told reporters that illegal immigrants are being brought into the area without official paperwork. That leaves officials with no clue where they’re coming from.

“It’s our job in law enforcement to keep communities safe, and that job’s challenged when we have nothing more to work with than just the unknown,” Williams said, applauding DeSantis’ proposals.

Republicans control both legislative chambers in Florida in addition to the governor’s mansion.