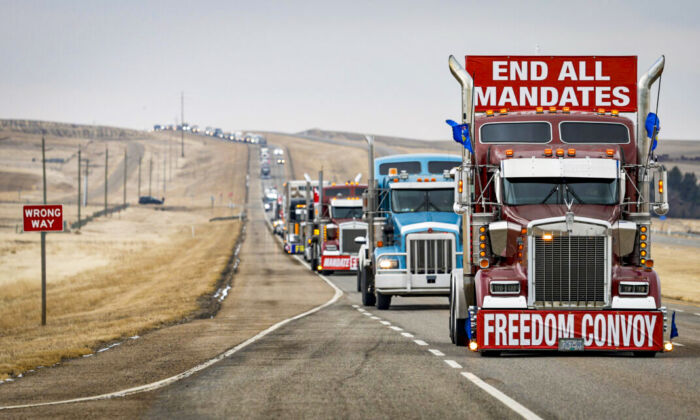 Protesters leave in a truck convoy at the U.S. border crossing after demonstrating against COVID-19 mandates for over two weeks, in Coutts, Alberta, on Feb. 15, 2022. (Jeff McIntosh/The Canadian Press)
US News

New England Truckers Getting Ready to Protest Against Government Policies

A fast-forming convoy of truckers from all six New England states will soon be making its way down the region’s coastline to join other truckers in Washington in a protest against COVID-19-related mandates and a myriad of other federal government directives, as well as some local ones.

Under the name Freedom Convoy Northeast, organizers of the trucking protest told The Epoch Times that they’ll be leaving from northern Maine on March 2 with plans to meet up with convoys in Vermont, New Hampshire, Massachusetts, Connecticut, and Rhode Island.

New York and Pennsylvania truckers will also be part of the northeast convoy, James Ambrosino—a trucker and lead organizer of the group—told The Epoch Times in an exclusive interview.

The reason for the protest is to take back America, Ambrosino said.

Ambrosino said truckers are staging the protest because they recognize its ability to garner government attention.

“Without trucks, there are no supplies,” he said.

Ambrosino stressed that the truckers are planning a peaceful trek with plans to go under the speed limit, keep safe distances from one another, travel in a single line in the far right lane, and yield to other motorists on the road.

According to Ambrosino, the trucker’s main initiative is to put pressure on the federal government to abolish the Emergency Use Authorization (EUA) that was used by the government to fast track COVID-19 vaccines and then mandate them.

He talked about the EUA’s origins under the “war on terror” following 9/11 and its intentions to use it to speed up the protection of U.S. soldiers against bioterrorism threats on enemy lines.

“It was never intended to be used by the American government to bypass the law, the constitution, and control the populace like it’s using it for now,” Ambrosino said.

The northeast convoy is planning a route beginning in Bangor, Maine, then proceeding down that state’s 300-mile stretch of Interstate 95.