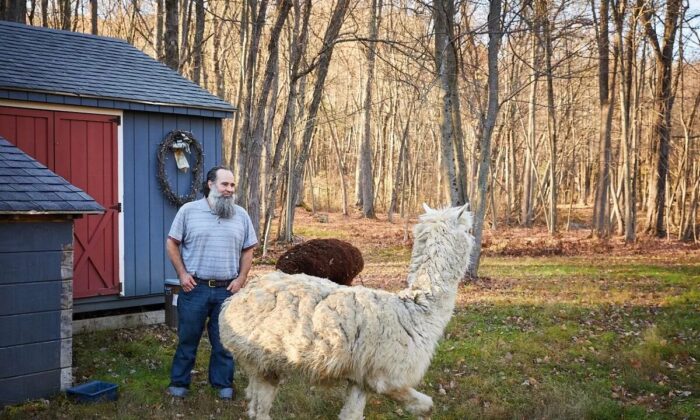 Alan DiPietro in an undated photograph at his alpaca farm in central Massachusetts. (Courtesy Pacific Legal Foundation)
By Matthew Vadum

After a town in central Massachusetts seized dramatically more than what a farmer owed in property taxes, the farmer is suing the town in federal court for alleged “home equity theft.”

Alpaca farmer Alan DiPietro, an engineer by training who lives outside of Worcester, filed suit (pdf) earlier this month against the town of Bolton, claiming that the seizure constitutes an unlawful taking of his property in violation of the Massachusetts Constitution and the Fifth Amendment to the U.S. Constitution.

Massachusetts law permits the government to keep the excess amount. The Pacific Legal Foundation (PLF), which is representing DiPietro, calls this home equity theft. Twelve states and the District of Columbia allow local governments and private investors to seize dramatically more than what’s owed from homeowners who fall behind on property tax payments, according to the PLF, which issued a December 2022 report on the practice, The Epoch Times reported.

The U.S. Supreme Court will soon take up the issue of home equity theft in a PLF case.

On Jan. 13, the court agreed to hear Tyler v. Hennepin County, Minnesota, the appeal of a 94-year-old homeowner who’s challenging the constitutionality of laws that allow local governments to take the full value of a home as payment for much smaller property tax debts. The county seized Geraldine Tyler’s condo, valued at $93,000, and sold it for just $40,000. Instead of keeping the $15,000 it was owed, the county retained the full $40,000, amounting to a windfall of $25,000, according to the PLF. A date for the hearing has yet to be determined.

DiPietro had been raising alpacas and marketing their fleece since 2008 in Bolton, a town in the Nashoba Valley region. But by 2014, he needed more land, so he purchased 34 undeveloped acres situated in Bolton and the neighboring town of Stow. He mowed the existing fields and put up fencing and some small structures, unaware that Bolton would claim that the improvements required local permits.

Although both towns claimed the upgrades were made too close to a wetland protected under state law and violated both towns’ bylaws, DiPietro argued that using the land for agricultural purposes was exempt from local conservation rules. The towns sued DiPietro, and he was charged $26,000 to restore the protected area.

After the legal battle, DiPietro couldn’t afford his home mortgage and also the property taxes on the farm. The home was foreclosed on and he moved into a recreational vehicle on his farmland.

PLF attorney Joshua Polk said the town “stole over $310,000 worth of property equity from our client” and deliberately frustrated the client’s efforts to settle his debt.

DiPietro was caught in a situation he couldn’t resolve. He tried to sell off part of the land but was blocked.

“[He] had a tax that he wanted to pay by selling off one of the lots of property, but he couldn’t get a permit to make the property suitable for a residential sale, because he owed taxes that he was trying to pay by selling the lot,” Polk told The Epoch Times in an interview.

“It’s a circular situation that he got trapped into. And at every point along the way prior to foreclosure, and even after foreclosure, he was seeking out ways to pay this tax debt, but he was blocked at every turn by the town.”

Bolton “completely derailed his plans,” according to Polk.

“[DiPietro] was hoping to have a fully operational farm. He was hoping to build a house for his parents on the property,” the attorney said. “And all this was supposed to be a fresh start for him because he had experienced some financial difficulties in the past—bankruptcy, divorce, all sorts of stuff like that. So he was really hoping this will be a fresh start, but unfortunately, the town had other plans.”

Officials for the Town of Bolton didn’t respond by press time to a request by The Epoch Times for comment.