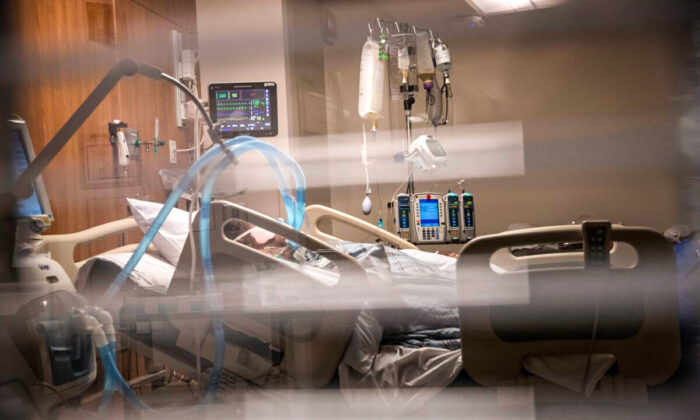 Breathing tubes hang next to a man with COVID-19 on a ventilator at a Stamford Hospital Intensive Care Unit in Stamford, Conn. on April 24, 2020. (John Moore/Getty Images)
By Nanette Holt

New information collected under the federal Right to Try Act shows promise for the new drug ZYESAMI, now in clinical trials for the treatment of serious cases of COVID-19.

The information was collected by a hospital in the U.S. southwest, drug developer NRx announced in a news release Jan. 26.

ZYESAMI, developed by the Radnor, Pennsylvania-based pharmaceuticals company, currently is being tested with patients as part of the approval process of the U.S. Food and Drug Administration (FDA). The company hopes to earn emergency-use authorization (EUA) that would allow widespread use of the drug in the treatment of COVID-19.

For now, the drug has progressed far enough in the process to be used by more patients under the federal Right to Try Act. That law allows the use of investigational drugs for patients diagnosed with life-threatening diseases or conditions, who have tried all approved treatment options, and who cannot participate in a clinical trial to access certain unapproved treatments.

The hospital reported that 16 of the 19 patients treated with ZYESAMI for COVID-19 respiratory failure “survived the ICU,” NRx announced. ZYESAMI is the brand name of aviptadil, a synthetic version of a natural chemical made in the human body called human vasoactive intestinal polypeptide.

The hospital’s report said there were no serious adverse events associated with the use of the drug, according to the company’s statement. Patients were treated during the Omicron surge at the first onset of respiratory failure, after first trying remdesivir and other approved therapies.

Under Right to Try, NRx currently provides the drug for just the cost to overnight it to the patient, company spokesman Jack Hirschfield told The Epoch Times. Requests can be made through the form on the company’s website. The only catch is that the request must be made by the patient’s doctor.

And that can keep patients from actually trying it.

The Epoch Times was in receipt of letters between the family and the hospital, showing the hospital was not willing for the new drug to be used under Right to Try. The Epoch Times has sent multiple requests for comment to Banner Ironwood Medical Center’s media and public relations department, but has received no response.

After Judge died, his daughter was working with another family wanting to try ZYESAMI, after all other COVID-19 treatments failed to help their loved one in a Minnesota hospital. For two weeks, the family waited for the drug to be given, only to find out that the request was never submitted to NRx, Treister said. That patient suffered a massive heart attack before the drug could be obtained, she said.

“Unfortunately, not everyone is able to get the hospital to cooperate with Right to Try,” NRx CEO Jonathan Javitt, M.D., affirmed.

The company has shared a document on its website explaining the technicalities of how the new drug works. In simplified terms, when the virus that causes COVID-19 gets in the lungs, it causes toxin build-up and restricts the production of surfactant.

Surfactant is the natural substance made in the body that helps keep the hundreds of thousands of tiny air sacs in the lungs open. When those air sacs are open, they allow oxygen to move from the lungs into the blood and throughout the body. COVID-19 causes those air sacs to stop functioning properly.

ZYESAMI works by binding to cells in the lungs, increasing surfactant production, preventing production of virus-related toxins, and blocking virus replication, Javitt told The Epoch Times. The drug continues to be tested in an ongoing National Institutes of Health (NIH) trial.

Roofing contractor Joel Webb, 40, of Colleyville, Texas enthusiastically shared his story of using ZYESAMI as part of an earlier trial in mid-October. His recovery, the husband and father of four said, was nothing short of miraculous.

When he first realized his COVID-19 infection was getting serious, he resisted going to the hospital. Three friends from church had already died from the virus. Checking into the hospital seemed to mean certain death, he told The Epoch Times.

But when a doctor friend urged him to get checked out at an emergency clinic where she was working, he agreed.

He’d been sick for about seven days, and “I was to the point where I didn’t even know where I was,” he said.

A CT scan showed his lungs looked full of shattered glass. Immediately, his doctor at the Frisco, Texas hospital offered ZYESAMI, telling Webb it was still in trials. Webb and his family declined. It seemed too risky to try an unapproved medication, he said.

Over the next few days, Webb’s condition worsened dramatically. He required increasing amounts of oxygen. The next step, he was told, was to go on a ventilator.

Devastated, his family gathered around him in the intensive care unit and prayed. Suddenly, he said, they were at peace about trying  ZYESAMI and told his doctors.

Shortly after, a courier delivered the drug, he said. That night, he remembers nurse technician Daniel Igheghe holding his hand, praying with him, and singing a Christian worship song to help Webb drift off to sleep, as he struggled to breathe.

By the next day, something amazing had happened, he said. His vital signs rapidly improved, Webb said, and his need for oxygen dramatically decreased. The trend continued steadily. Soon, he was out of the ICU. And nine days after being admitted to the hospital, he left, no longer on oxygen.

Recently, he returned, though, to personally thank the nurse who held his hand and prayed with him, the doctor who recommended the trial drug, and the pharmacist who filled the prescription. He said he had no side effects from ZYESAMI, other than feeling flushed and hot, as the drug dripped into his vein.

“Then you get cold,” he said with a chuckle. “You can feel it and you know you’ve gotten something.”

This past weekend, he went on a three-mile hike and gave thanks for the drug he believes saved his life.