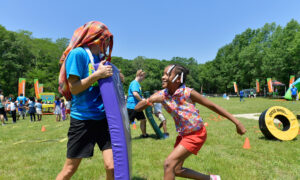 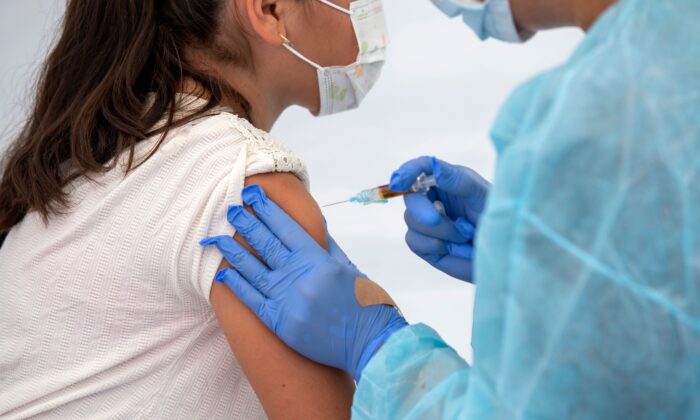 A health worker vaccinates a student during a community drive-up clinic in Los Angeles on Aug. 12, 2020. (VALERIE MACON/AFP via Getty Images)
US News

New DC Law Would Give Vaccine Decisions to 11-year-Olds, Cut Parents Out

WASHINGTON—The nation’s capital city is looking likely to pass legislation that would allow children as young as 11 years old to make their own decisions on receiving vaccines, without parental consent or knowledge.

Bill 23-171 would allow for children as young as 11 to consent to all vaccines on the government schedule. At the same time, the school, health care provider, and the parent’s private insurance would conceal the child’s vaccination from parents or guardians—who would have no knowledge of the vaccination unless the child told them.

The bill states that the minor must be “capable of meeting the informed consent standard,” which would be determined by a physician.

The legislation was first introduced on March 5, 2019, with a public hearing held on June 26, 2019. The bill then sat until Oct. 7 this year, when the four-person health committee revised it, passed it, and brought it up to the full council for a vote on Oct. 20. It passed resoundingly (12–1) and now heads back for a second reading and final vote on Nov. 10 before landing on the mayor’s desk for a signature.

The primary sponsor of the bill, council member Mary Cheh, said in the Oct. 7 meeting that the current pandemic has given the measure more urgency.

“Given our ongoing pandemic and the incredible work being done to develop a COVID-19 vaccine, it’s more important than ever I think that we reduce any and all barriers to these treatments,” Cheh said. “And this legislation aims to do just that by increasing access to vaccines for minors who choose to get vaccinated but have not been able to do so.”

Council member Trayon White, the lone dissenting voice during the Oct. 20 vote, said his objection is to the removal of parents from the decision.

“For me, it’s not an issue of the vaccination, it’s an issue of the council voting to circumvent the inclusion of a parent making the decision about their child,” White said. “Medical practitioners, schools, and others should not be permitted to coerce or press minors into procedures that are capable of causing injury or death, behind their parents back.”

White said he wouldn’t want his own 12-year-old son making unilateral decisions about his health when the boy can “barely put together a five-page paper or finish his homework on time,” and he’s frequently “up late at night playing Fortnite.”

“This is essentially cutting parents out of the equation of their childrens’ health care,” Holland told The Epoch Times. “I think this is extremely dangerous. And I think parents across the country will be able to perceive the danger that this represents—not only to their children, but to their rights as parents. If the school knows better, who’s to say the parents should be the custodians?”

Holland has fought against the elimination of exemptions for mandatory vaccinations for children, especially those who are medically fragile. Children’s Health Defense is currently fighting vaccine mandates in California and New York, as well as being part of the team suing pharmaceutical company Merck for allegedly causing severe injuries with its Gardasil vaccine.

Almost all of the District of Columbia’s school children are adequately vaccinated, following the government’s recommended schedule, according to Anjali Talwalkar, the senior deputy director of Washington’s Department of Health.

Talwalkar said that of the 123,000 school students in the district’s public schools, 58 students had medical exemptions and 179 had religious exemptions from some or all vaccines. The new bill would be able to circumvent a parental request for their child to opt out of a vaccine based on a religious exemption and conceal that from the parent.

“This bill is not likely to increase community-wide vaccination coverage in the District of Columbia, which is the priority at this time,” Talwalkar said at the 2019 hearing.

However, the existing law is almost exclusively related to sexual issues and is narrow compared to what the new bill would open up, said Dawn Richardson, director of advocacy of the National Vaccine Information Center, which tracks vaccine-related health issues.

The Centers for Disease Control and Prevention (CDC) said it receives about 30,000 vaccine injury reports each year. The reporting system is voluntary and estimates suggest it captures about 1 percent of all adverse effects, according to a report by Harvard Pilgrim Health Care, Inc.

Most of the reports are for mild side effects, but the CDC says 10 percent to 15 percent of the adverse reactions include permanent disability, hospitalization, life-threatening illness, or death.

Currently, the government immunization schedule recommends a total of 72 doses of 16 vaccines for children. Vaccines aren’t subject to double-blind, placebo-controlled studies, which are considered the most scientifically rigorous. Instead, they’re usually tested directly against other vaccines, without a comparison to a non-vaccinated subject.

Richardson called the D.C. legislation “negligent, predatorial, and criminal” and believes it contravenes Supreme Court precedent that puts a parent or guardian at the center of the decision-making process for their child.

She said a child isn’t likely to have at hand their family medical history or their neurological history, or even know if they had a reaction to a vaccine as an infant. She is concerned that if parents don’t know their child received a vaccine, they won’t be able to connect the dots if the child falls ill.

Richardson said it’s wrong to allow an 11-year-old to “take a biological pharmaceutical product, that is something that could cause injury and death, and has federal protection to protect the provider and the manufacturer from any liability.”

Vaccine manufacturers are protected from liability, and patients who have reactions must instead go through a special federal government court system for vaccine injury complaints.

Cheh said on Oct. 20 that people who oppose certain vaccines “believe that it’s just their choice,” but argued that community protection of a disease is more important.

“Maybe this legislation can be the vehicle to look at some of the larger issues about vaccination, in terms of enforcing the law with respect to children attending schools, or providing other remedies that may have to be put in place to make sure that we have the highest level of vaccination that would be possible,” Cheh said in the 2019 hearing.

All states already have some sort of mandatory vaccination schedule for children to attend school. And states would likely have the legal authority to mandate a vaccine on their populations during a public health emergency or outbreak of a communicable disease. Generally, the power is held by the governor or state health officer.

Should District of Columbia Mayor Muriel Bowser veto the bill, the council has the numbers to override her with a two-thirds vote. The final step for the bill is a 30-day waiting period in the House of Representatives, a unique requirement for the District of Columbia. In an unlikely move, the House could enact a joint resolution against the bill, which would also need the president’s signature to override it.

Sen. Leahy Returns From Hospital After Being Examined for Feeling Unwell
0