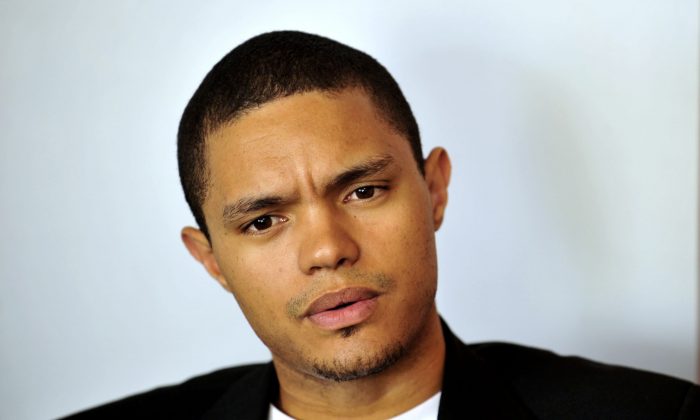 In this photo taken Oct. 27 2009 South African comedian Trevor Noah is photographed during an interview. Trevor Noah, a 31-year-old comedian from South Africa who has contributed to "The Daily Show" a handful of times during the past year, will become Jon Stewart's replacement as host, Comedy Central announced Monday March 30, 2015. Noah was chosen a little more than a month after Stewart unexpectedly announced he was leaving "The Daily Show" following 16 years as the show's principal voice. (AP Photo/Bongiwe Mchunu-The Star) SOUTH AFRICA OUT NO SALES NO ARCHIVE
US

Based on his previous stand-up routines, Trevor Noah–named as the new host of Comedy Central’s The Daily Show–seems like a good fit.

In this set, Noah talks about flying from South Africa to the U.S. and U.K., using a variety of accents (including American, British, and Arabic), and he nails them.

Such a skill will probably serve him well in his new job reporting on world events.

However, Noah was criticized for tweets after he was named the new host.

By Tuesday, Trevor Noah was a trending topic on Twitter as he drew fire for jokes described as tasteless, hateful — and unfunny. Roseanne Barr was among those calling out the 31-year-old South African comic, who has an international following and two million Twitter followers.

Noah’s controversial tweets were posted between 2009 and 2014.

In 2009 he wrote, “Almost bumped a Jewish kid crossing the road. He didn’t look b4 crossing but I still would hav felt so bad in my german car!”

In a post from 2011, he writes, “Oh yeah the weekend. People are gonna get drunk & think that I’m sexy!” He attributes the joke to “fat chicks everywhere.”