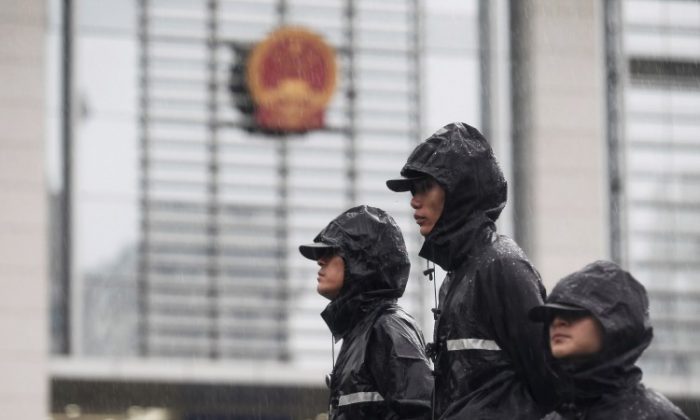 Police officers stand guard outside the Anhui provincial court on August 9, 2012. China’s Supreme Court has proposed a new law that would allow it to detain and even temporarily disbar defense lawyers. (Lintao Zhang/Getty Images)
China

China’s Supreme Court has proposed a new law that would allow it to detain and even temporarily disbar defense lawyers for taking pictures during trials, making audio or video recordings, and emailing or blogging information about court proceedings and cases. It described the changes as an interpretation of existing law. Lawyers in China have condemned the measures.

The Criminal Case Research Committee of the Shanghai Bar Association held an emergency meeting Aug. 24 over the proposed restrictions, according to the Southern Metropolis Daily.

Both the content and the method are a problem, according to lawyers.

China’s Supreme Court does not have the authority to suspend law licenses, only the Ministry of Justice can do that. The Supreme Court also cannot enact new laws. However, China’s court system is far from independent and is controlled by the Political and Legislative Affairs Committee (PLAC), an extra-judicial organ with immense power. The PLAC stands above the prosecution, the courts, and the secret police, controlling the 1.5 million-strong Armed Police and the 1.7 million army of regular police.

According to an April 16 Epoch Times commentary on the PLAC’s power behind the scenes, Radio France International (RFI) quoted lawyer Lin Dongpin who said that interpreting the law does not mean making a complete new law, but rather resolving details of how existing laws should be applied. The Supreme Court went so far beyond its authority it amounted to making new legislation, in his opinion. The court being able to punish lawyers with six months to one year of suspended practice has obviously gone beyond its authority. “It is very absurd,” said Lin.

The Southern Metropolis Daily reported that on July 30 China’s Supreme Court released what it described as draft interpretations of the Criminal Procedure Law of the People’s Republic of China.

It released the interpretation only to courts, not to the public. The courts have until mid-September to comment on the draft. The new law is to be made public at the end of the year, and to take effect on Jan. 1.

Details that lawyers found problematic include article 249, which forbids participants in court proceedings who bring “laptops and tablet PCs into the courtrooms with the People’s Court’s permission, must not use the tools to record, videotape, photograph or report trial activities through emails, blogs and micro-blogs.” Article 250 describes the punishment: Attorneys or other client’s representatives who have been kicked out of the courtroom, “fined, or detained due to serious violation of the court order are subject to six to twelve months’ ban by the People’s Court.” Those who are lawyers can be disbarred for six to twelve months.

Lawyer Yang Xuelin from Beijing Shouxin Law Firm wrote on his qq micro-blog that if the new law takes effect judges will be mere decorations, and public corruption will go completely unchallenged. “The Supreme Court using judicial interpretation to restrict lawyers is a ridiculous attempt at castration … Defense would sit totally silent, the prosecution would dominate the courtroom, and the filth of the public security organs … will be unchallenged.