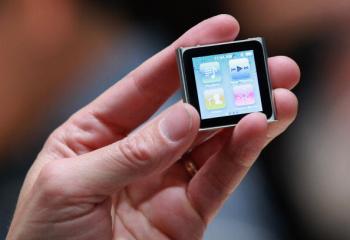 A new iPod Nano at an Apple Special Event at the Yerba Buena Center for the Arts September 1, 2010 in San Francisco, California. (Justin Sullivan/Getty Images)
News

The AppleTV, first introduced in 2006, is a device that is not as well known as the company’s other products. However, the new AppleTV may change that.

Only one fourth the size of the first generation AppleTV, the new generation offers a wide selection of Hollywood Television and TV shows with everything in high definition. Customers who purchase the product are able to receive television episodes and movies at a lower rental price. No purchases will be available for the AppleTV.

“You rent everything,” said Steve Jobs, the CEO of the Apple Company. “To rent HD TV shows, they’re going to be 99 cents.”

In addition to TV shows and movies, users can browse Youtube and Podcasts using the AppleTV. Apple also collaborated with Netflix so that all Netflix subscribers can stream DVDs directly on TV using the device without fees.

Designed to be simple to use for everyone, the device only has plug in spaces for the power cord, HDMI, and Ethernet on the back. Not only is it easy to use, Jobs said, the product is also is “silent, cool, and tiny,” as it does not use a fan to cool down.

The new Apple TV will be available in stores in four weeks at the price of $99, 200 dollars less than the previous generation. Pre orders begin on September 1.

Other anticipated product releases include the new designs for the iPod touch, shuffle, and nano. Jobs claimed that it was the “biggest change in our iPod lineup ever.”

The fourth generation of the iPod shuffle, which is even smaller than the second generation, was equipped with the popular features of the past generations.

The new iPod nano was also a break through as the device’s screen and scrolling wheel was replaced by a single tiny touch screen. The product is 46% smaller, resembling a square rather than a rectangle.

Apple’s iPod touch was the product with the least change in appearance. Although several technology sites had predicted the product outcome to be extremely similar to iPhone 4, the fourth generation iPod Touch is very similar to the former generation, but thinner and has four times more pixels, with displays at 326 pixels per inch.

Predictions of the device having two cameras turned out to be correct as the new iPod has a front camera for face time and a back camera for high definition video recording.

In addition to the generous amounts of updates to the product lines, Apple also introduced a new version of iOS and iTunes 10 application.

The released iOS is expected to fix all the existing bugs, support the ability to upload high definition videos via WiFi, and allow Apple users to take High Dynamic Range (HDR) photos.

“IOS 4.1 will be available next week for iPhone and iPod Touch,” said Jobs. IOS 4.2, which will feature AirPlay, is expected to come out in November for the iPod Touch, iPhone, and iPad. AirPlay is “all about iPad” and users will be able to print and stream music, videos, and pictures through WiFi on the iPad. Multitasking will also be possible.

ITunes 10 gets a new logo and along with that, Ping, a social network for music, is introduced. Through Ping, iTunes users are able to follow their favorite artists and friends and discover what others are listening to.

Apple has sold more than 275 million iPods up to date and has opened 300 retail stores in ten countries around the world. The company recently opened a store in France near the Louvre, a second store in Shanghai, China, and another in London.