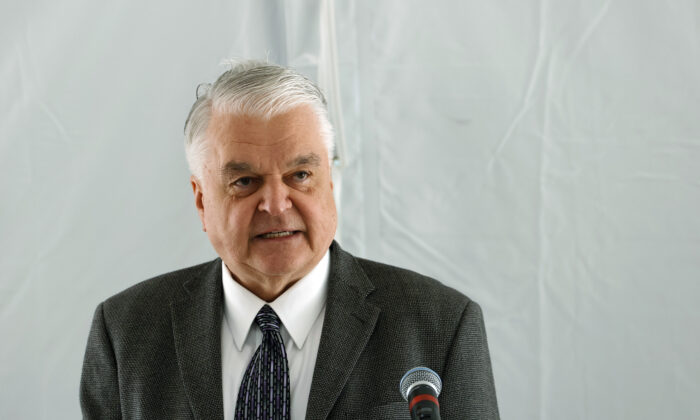 Sisolak, who is up for reelection in 2022, said in publicly available remarks that “given all of these updates and the tools we have, now is the appropriate time for me to announce that Nevada will rescind our mask mandate, effective immediately.”

Masks are no longer required in public spaces, Sisolak said, but “there are locations where you may still be asked to wear a mask.”

In a key difference from some of his Democrat colleagues, Sisolak said that masks will no longer be required to be worn in schools, although he said districts will have to plan for possible future COVID-19 outbreaks. The governors of Illinois and New York on Feb. 9 announced an end to their indoor mask rules, but they said school mandates will remain intact.

Federal mask mandates will still remain in effect for planes, in airports, and on public transportation. It isn’t clear when the U.S. Centers for Disease Control and Prevention (CDC) will ease such restrictions.

“We’re of course taking a close look at this in real-time, and we’re evaluating rates of transmission as well as rates of severe outcomes as we look at updating and reviewing our guidance,” she told reporters.

The Nevada governor’s announcement comes after the National Federation of Independent Business (NFIB) state chapter urged his office on Feb. 9 to drop the statewide mask mandate. The reason why, it argued, is that the mandate is making it difficult for small businesses to retain and hire workers.

The NFIB chapter said Nevada had the highest “quit” rate in the nation last year at 3.8 percent. Citing Chamber of Commerce data, the group also stated that workers often complained of mask requirements.

“While many question the effectiveness in stopping the spread of COVID, there is agreement that after two years, more and more people are refusing to wear masks, which is presenting a challenge to employees who still have to act like the ‘mask police.’”