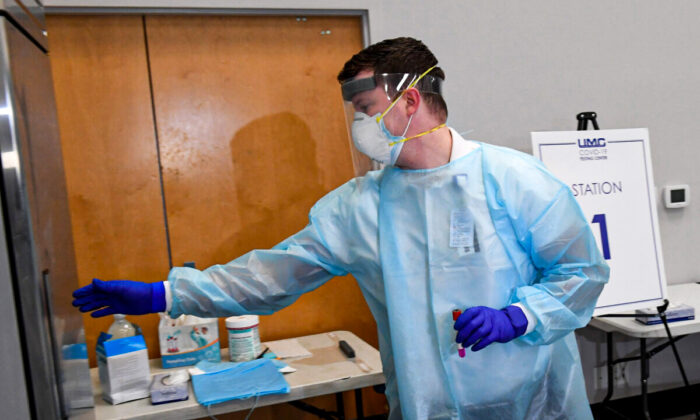 A supervisor puts a COVID-19 specimen sampling tube into a refrigerator at a testing site at the University of Nevada-Las Vegas on Nov. 30, 2020. (Ethan Miller/Getty Images)
By Zachary Stieber

Nevada on Thursday became the first U.S. state to impose a surcharge on workers who have not gotten a COVID-19 vaccine, though the penalty doesn’t take effect until the middle of next year.

All but two members of the state’s Public Employees’ Benefit Program Board (PEBP) voted during a meeting to approve a surcharge of $55 a month on unvaccinated workers.

The approved proposal also stipulates a surcharge of $175 a month for workers’ spouses, partners, and dependents 18 and older. That could be adjusted down the road.

They’ll help offset the costs of COVID-19 testing, Laura Rich, executive officer of the board, said.

Testing costs through September were estimated at $3.3 million.

The board did not analyze the cost of COVID-19 hospitalizations for the proposal because that would have made the surcharge for spouses and dependents “significantly higher,” Rich said. State rules bar making the surcharge on workers any higher.

Nevada’s Department of Labor last month released guidance saying the surcharges were legal, and Rich compared them to surcharges on smokers imposed by plans in the past.

Exemptions are available for religious or medical reasons, as required by law.

PEBP, a state agency, is required by law to provide insurance to state and other public eligible employees. As of 2020, that included approximately 44,000 participants and about 27,000 family members and survivors.

Some details of the surcharges, such as how they’d be levied, have not yet been released.

Public commenters during the meeting, and those submitting written statements, spoke out against the proposal before the vote.

“I believe that the proposed surcharge is inappropriate and excessive,” Ellen Crecelius, one member of the public, said in a statement. She noted that many people enjoy natural immunity, or the protection one gets after having recovered from COVID-19.

Shanna Cobb-Adams said she already pays $255.06 a month. The new surcharges would increase that by 90 percent. She expressed concern about her 18-year-old son getting a vaccine when studies show that young males are at elevated risk of developing heart inflammation after getting a vaccine, while COVID-19 poses little risk to healthy youth without serious underlying health conditions.

Another commenter noted that Gov. Steve Sisolak, a Democrat, is the one forcing workers to get tested weekly if they don’t get a vaccine. “The unvaccinated should not have to foot the bill for the agency’s unjust decisions,” she wrote. “The fact is vaccinated and unvaccinated employees both can contract and spread the virus equally, yet the state has decided to only put the hardships on the unvaccinated unfairly.”

Some members also voiced opposition to the proposal, and two voted against it.

Several state residents did support the measure, including one who said that “anti-vaxxers should pay for their choice since their freedom is not free.”

Sisolak’s policy director, DuAne Young, said that the pandemic “has been shouldered on the burden of everyone.”

“And now this particular burden—the testing—should be shouldered on the burden of those who refuse to (be vaccinated),” Young added.

Some companies have imposed surcharges but no states had before Thursday.

Discussions with entities that had imposed penalties pointed to benefits like increasing the percent of workers who are vaccinated and offsetting rising costs, Rich said. If the board did not approve the surcharges, every workers’ premium, regardless of vaccination status, would need to be hiked, she said.

Revenue from the surcharges is expected to be about $18 million a year. Testing costs are pegged at ranging from $12 million to $24 million.

Prior to the vote, representatives for the American Federation of State, County, and Municipal Employees and the Nevada Faculty Alliance said the unions were not taking a position on the proposal.

Terri Laird, representing the Retired Public Employees of Nevada, said the organization also was neutral on the surcharges.

But, she told members, the added costs would “burden many employees.”