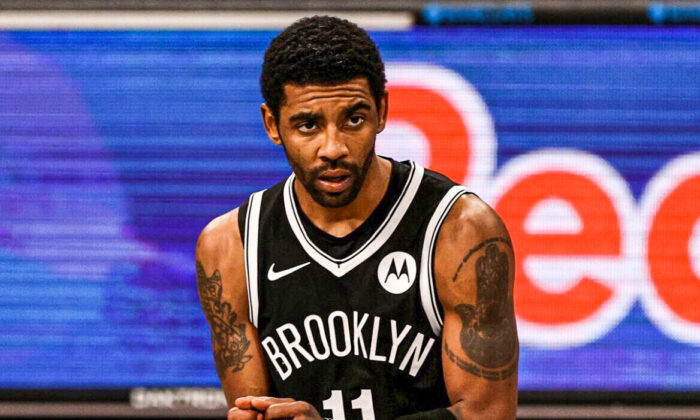 Kyrie Irving #11 of the Brooklyn Nets reacts in the second half against the Miami Heat at Barclays Center in New York City on Jan. 23, 2021. (Elsa/Getty Images)
NBA

Brooklyn Nets guard Kyrie Irving on Monday reasserted that he won’t reconsider taking the COVID-19 vaccine despite his teammate Kevin Durant’s knee injury that is expected to sideline him for weeks.

Although getting vaccinated would make the seven-time All-Star point guard eligible to play in all Brooklyn Nets’ games, Irving said he won’t be swayed, as his teammate is potentially set to be sidelined for six weeks.

Athletes playing for New York City’s professional sports are mandated to be vaccinated to play in the city’s public venues. The Nets reversed course last month and are allowing Irving to play in road games.

“That’s my decision already, and I’m standing on it,” Irving said.

He repeated that he remains “rooted” in his decision not to get vaccinated.

“That’s what I think comes into a lot of this culture and basketball and sport and entertainment,” Irving said. “You bring in teams and you bring in situations. Kev’s going to heal, Kev’s going to be OK, and we’re going to have to deal with that as his teammates. But in terms of where I am with my life outside of this, I stay rooted in my decision. And that’s just what it is.”

“It’s not going to be swayed just because of one thing in this NBA life. That somehow it’s brought to my attention as being more important than what’s going on in the real world. It’s just not happening for me,” said Irving when pressed on whether he feels pressure to get vaccinated following Durant’s injury.

Irving said he’s bothered that his decision is being questioned and that it’s almost always framed in the context of his profession, not his personal life.

“Again, I respect everyone else’s decision, I’m not going to ever try to convince anyone of anything or any of that, I’m just standing rooted in what I believe in,” he added. “And though we’re dealing with this right now with Kev, I just know that I’m protected by the organization, I’m protected by my teammates, I’m protected by all the doctors I’ve talked to. And I just stand rooted.”

On Jan. 7, prior to his knee injury, Durant said that he wouldn’t pressure his teammate to get vaccinated against the CCP (Chinese Communist Party) virus, which causes COVID-19.

“I told him how important he is and how much I want him to play every game, but like I said, I’m not about to force somebody to get a vaccine,” Durant said. “Like, that’s not my thing. So he can play basketball? I’m not about to do that.”

Durant has a sprained medial collateral ligament of his left knee and is undergoing a period of rehabilitation.