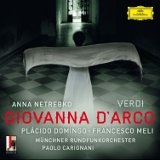 The life of Joan of Arc has inspired countless works (of varying quality), including plays by Schiller, Shaw, Anderson and Anouilh and films by Dreyer, Bresson, Fleming and Preminger. The play by Schiller inspired Verdi’s opera, “Giovanna D’Arco” and was one of the sources of Tchaikovsky’s opera, “The Maid of Orleans.” The Schiller play and the operas based on it take liberties with the historical record, adding a romance and, in the case of the play and Verdi opera, having the heroine die in battle rather than being burned at the stake. (One of the striking facts about Joan of Arc’s life is that it is so well documented. There is actually a written record of her trial in 1431.)

The 1845 Verdi work (his seventh opera) is rarely performed, but was presented in a concert version at the 2013 Salzburg Festival. Fortunately, the event, the hit of the Festival, was recorded and has been released on a 2-CD set by Deutsche Grammophon.

The title role is portrayed by Anna Netrebko, Plácido Domingo is her father Giocomo (a baritone role) and tenor Francesco Meli is Carlo. Paolo Carignani conducts the Münchner Rundfunkorchester.

The action starts in 1429 with Carlo (King Charles VII of France) dejected because of a series of defeats during the 100 Years’ War.  He is considering abdicating when he meets a peasant girl named Giovanna (Joan of Arc). She believes she has divine instructions to lead the French troops against the English invaders. She inspires Carlo to continue fighting. Meanwhile, Giovanna’s father, Giacomo, overhears the conversation and believes that the King has seduced his daughter and that she is a witch.

Giacomo decides to turn Giovanna over to Talbot, the English commander. The French are victorious in battle and, when Giovanna announces her intention to return home, Carlo declares his love for her. She reciprocates his feelings and accompanies him to his coronation.

Joan is treated as a national heroine and Carlo publicly names her as France’s patron saint. Giacomo is furious over what he perceives as blasphemy and charges his daughter with witchcraft. The girl doesn’t defend herself because she feels guilty about her romantic attachment to the king. Giacomo hands her over to the English.

In the last act, Giovanna is in chains in the English camp while the French are engaged in what appears to be a losing battle. Giacomo visits her and admits his error. He frees Giovanna, after which she joins her country’s troops. The French are victorious but she is mortally wounded. She dies in the belief that she is going to Heaven.

The opera is not on the level of Verdi’s later masterpieces but there is much beautiful and rousing music. The last act is especially notable for the wrenching father-daughter scene (a forecast of Gilda’s emotional duets with her father in “Rigoletto”). The chorus plays a large role, as angels, demons, soldiers and townspeople. Netrebko is in top form, acting with her usual dramatic commitment but also up to the technical challenges of the part. Domingo (who has previously recorded the role of Carlo) is outstanding as Giacomo.  Meli holds his own with his distinguished co-stars and sings with musicality and fire. Paolo Carignani leads the Münchner Rundfunkorchester with true style and the Philharmonia Chor Wein under Chorus Master Walter Zeh is excellent.

The sound quality is very good. Since this was a concert performance, there was no movement around the stage. The audience is silent until the applause at the end of each aria and scene. The set comes with a full libretto with translations as well as informative essays about the opera.

Now, if we could only get the Met to present this opera on-stage with these principals. It’s unlikely but at least Verdi lovers can content themselves with this fine recording.