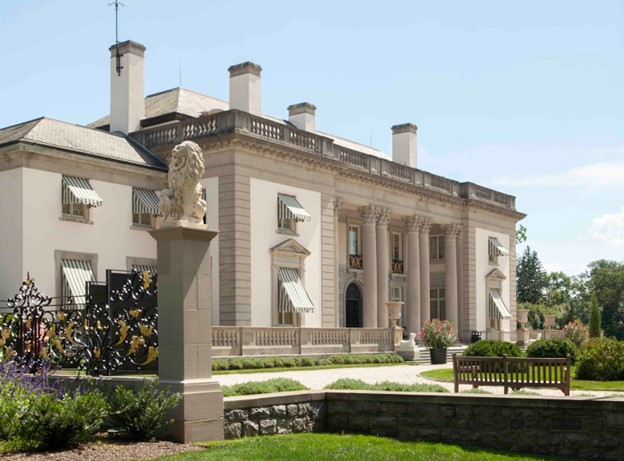 The overall composition of the main façade shows similarities to Versailles’ Petit Trianon with the centered corinthian columns, slender proportioned lower windows, refined sculptural ornamentation, and a distinctly French balustrade on the rooftop. The Nemours design then takes on its own style displaying cut stone trim with stucco walls, and a large round-top entrance. (J.H.Smith/Cartiophotos)
Arts & Tradition

Larger than life: Art that inspires us through the ages
BY James Howard Smith TIMEOctober 1, 2022 PRINT

Designed in 1909 on the tailcoats of America’s Gilded Age, Nemours Estate graces the southern Delaware countryside with its French neoclassical architecture and formal garden. The 200-acre estate was designed for French industrialist Alfred I. duPont by architects John Merven Carrère and Thomas Hastings, both of whom trained in classical architecture at an École des Beaux-Arts (school of fine arts) in Paris. The mansion gives a nod to Louis XV’s summer palace, the Petit Trianon of Versailles.

The mansion sits on the plateau of a grand vista surrounded by ponds and a parterre garden, largely composed of orderly boxwood hedges. The main facade focuses on a central bay set in behind six Corinthian columns. The covered front porch looks out over the vista.

The estate design is symmetrically arranged on an inclined axis with the mansion at the top. In front, a terraced lawn lined with pedestals that are topped with flower-filled French urns leads the eye to a large fountain where the duPont family once swam and paddled in row boats. Behind the fountain, a maze garden surrounds the gilded sculpture Achievement, which looks upward toward the mansion. A colonnade defines the edge of the upper part of the garden.

The colonnade was designed with an archway that leads through to the lower part of the estate. There, visitors can explore the sunken garden, an additional expanse with grottos, fountains, and a lake, before coming to a garden folly that makes for a picturesque addition to the landscape.

Nemours was the largest residence in Delaware at the beginning of the 20th century and influenced architecture in the local region. It was the architect’s masterful use of the French classical style that has made Nemours estate a timeless source of beauty.