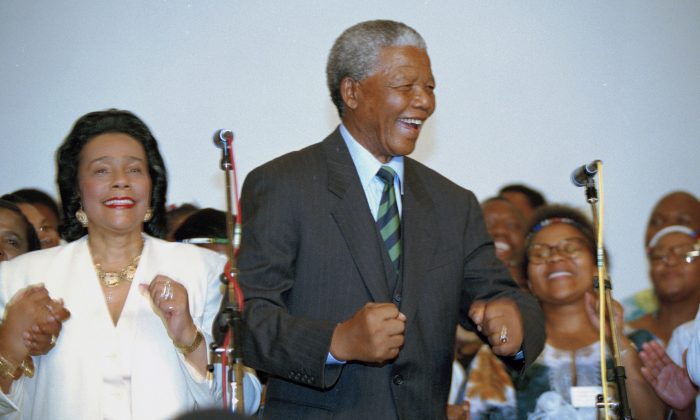 In this May 2, 1994 file photo Nelson Mandela, and Coretta Scott King, left, widow of slain civil rights leader Martin Luther King, Jr., sing and dance at a victory celebration for Mandela in Johannesburg, after Mandela and the ANC appeared to take the majority of the votes in the country's first integrated elections. (AP Photo/David Brauchli,file)
International

Zuma made the announcement on Thursday, reported The Associated Press.

“Our beloved Nelson Mandela, the founding president of our democratic nation, has departed. He passed peacefully,” Zuma said.

“He is now resting. He is now at peace,” he said, adding that “our nation has lost its greatest son. Our people have lost a father.”

“May his soul rest in peace, God bless Africa,” he said, adding that Mandela passed away at his home in Johannesburg at 8:50 p.m. local time.

“His humility, his compassion and his humanity earned him our love,” he added.

According to CNN, Mandela will have a state funeral, while Zuma ordered all flags to fly half-staff.

“Even when there are moments when you can see he’s struggling, but the fighting spirit is still there with him,” she was quoted as saying.

Makaziwe told the BBC: “Even for a lack of a better word… on his deathbed he is teaching us lessons – lessons in patience, in love, lessons of tolerance.”

Mandela was a respected figure around the world for his fight against racism in South Africa during the apartheid era. He spent 27 years in prison but was later elected as South Africa’s first black president. In South Africa, he is often referred to by his Xhosa clan name of Madiba, or sometimes “Tata,” which means father.

He was awarded the Nobel Peace Prize for ending the repressive apartheid without resorting to violence.

In 1962, he was arrested for the charge of causing a strike.

“At 1:30 in the morning, on March 30, I was awakened by sharp, unfriendly knocks at my door, the unmistakable signature of the police. ‘The time has come,’ I said to myself as I opened the door to find half a dozen armed security policemen,” Mandela said.

He was later sentenced to life imprisonment and was released 27 years later.

Since September 2013, he had been receiving around-the-clock care at his house after he was discharged from the hospital. He was battling a lung infection at the time.