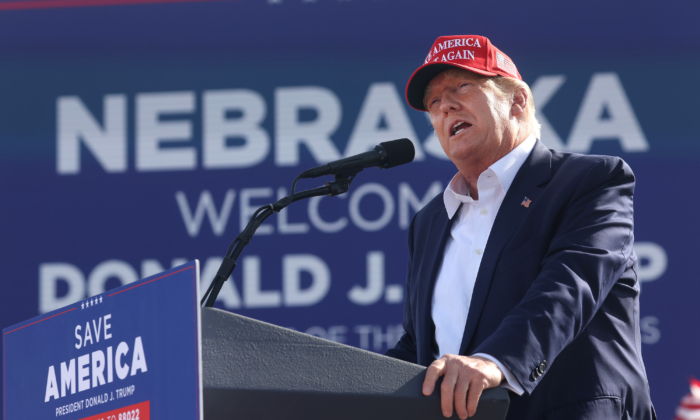 Former President Donald Trump speaks to supporters during a rally at the I-80 Speedway in Greenwood, Nebraska, on May 1, 2022. (Scott Olson/Getty Images)
2022 Midterm Elections

Twenty-two of the candidates endorsed by Donald Trump prevailed in the Ohio and Indiana primary elections on May 3.

Trump’s stamp of approval will receive its strongest challenge yet on May 10, when Nebraska voters head to the polls and decide on the Republican gubernatorial race.

Cattle rancher Charles Herbster has led in the polls for several months. Trump has endorsed Herbster, who served as the agricultural adviser during Trump’s presidency.

An April 14 article in the Nebraska Examiner disclosed allegations that dramatically altered the race. The exposé reported accusations that Herbster groped several women at political functions and fundraising dinners over several years.

He has repeatedly denied the accusations and claims that he’s the target of establishment Republican politicians, led by Nebraska Gov. Pete Ricketts and University of Nebraska regent Jim Pillen.

One of the women accusing Herbster is Nebraska state Sen. Julie Slama, a Republican, who told the Nebraska Examiner that “as she walked by Herbster, he reached up her skirt, without her consent, and touched her inappropriately.”

According to those involved, the incidents happened between 2017 and 2022, and the women ranged in age from their late teens to mid-20s.

In a statement after the Nebraska Examiner article was published, Herbster’s campaign manager, Ellen Keast, said the women’s allegations aren’t true and that “this is a political hit-piece built on 100 false and baseless claims.”

“Charles W. Herbster has a lifetime record of empowering women to lead,” Keast said. “His company, farm, and campaign are all run by women. Despite leading hundreds of employees, not once has his reputation been attacked in this disgusting manner.”

On April 22, Herbster filed a defamation lawsuit against Slama.

“As a result of Defendant Slama’s false statements about him, Plaintiff has suffered grievous harm to his reputation,” the lawsuit reads.

In a statement about the legal action, Herbster said, “As set forth in my lawsuit, the false accusations and attacks on my character are part of a greater scheme calculated to try and defeat my candidacy.”

Race Too Close to Call

Pillen has surpassed Herbster in two polls, and Nebraska state Sen. Brett Lindstrom has surged near the top.

A poll conducted by WPA Intelligence from April 30 to May 2 and commissioned by Pillen’s campaign found that Pillen is leading the race with 31 percent, followed by Herbster (26 percent) and Lindstrom (16 percent). The survey shows that 19 percent of Republican primary voters who were contacted are undecided.

When WPA Intelligence coordinated a survey from April 26 to April 28, the results had Pillen with 24 percent, followed by Herbster (23 percent), and Lindstrom (20 percent), with 24 percent of voters remaining undecided.

Trump traveled to Nebraska on May 1 to offer support for Herbster.

“He’s been badly maligned and it’s a shame. That’s why I came out here,” Trump said. “It would have been easy for me to say, ‘I’m not going to come.’ I defend my people when I know they’re good.”

Ricketts, who has served as Nebraska’s governor since 2015, can’t run again because of term limits. He has endorsed Pillen, as has former Nebraska Gov. Kay Orr, also a Republican.

Ricketts has said that he has contributed money to Conservative Nebraska, an organization that recently launched an attack ad that called Herbster the “king of the beauty pageant circuit.”

A narrator in the spot, which shows Herbster standing close to contestants, says: “Herbster joined pageants from Nebraska to Ohio to Bangkok, Thailand, all so he could judge countless young women and teenage girls. What Herbster did? You decide: Unusual, bizarre, or inappropriate.”

The ad is “lying to Nebraskans,” Herbster’s campaign said in a statement, which also included a quote from Sarah Rose Summers, who was Miss USA in 2018.

“As the first Miss USA from Nebraska, I take great pride in the Midwest friendliness of my home state. It has been brought to my attention that my photo is being used in a smear campaign against a friend of mine who has been nothing short of supportive of my husband and me. This type of ad is simply not the Nebraska way,” Summers said.

“I believe Julie Slama,” said Ricketts, who also said Herbster “needs to apologize to the women, then I think he should seek help, then he should step out of the race.”

After the May 1 rally, Trump participated in a conference call for Herbster supporters on May 5.

“Charles was a die-hard MAGA champion,” Trump said during the call. “When you vote for Charles in the primary, you can give a stinging rebuke to the RINOs and sellouts and the losers who are so poorly representing your state.”

Herbster has consistently blamed Ricketts for the accusations.

“Any allegation that was sent my way is 100 percent totally false,” Herbster said. “This is a proxy war between the entire Republican establishment in America against President Donald J. Trump. Anybody who the establishment cannot control, they are fearful of.”

The Ricketts family spent millions of dollars to prevent Trump from securing the Republican presidential nomination in 2016 and has feuded with Trump. At the time, Trump said the family had better “be careful.”

Last year, Ricketts tried to talk Trump out of backing Herbster. Ricketts said if Herbster wins the primary, he won’t endorse him unless he “apologizes to the women he’s done this to.”

Herbster has faced scrutiny since the beginning of his campaign because of his emphasis on Trump and the “America First” platform.

Nine Republican candidates are on the gubernatorial primary ballot in 2022.

The current race is reminiscent of 2014, when Ricketts prevailed in a down-to-the-wire Nebraska Republican gubernatorial primary election with just 25.5 percent of the vote.

In 2014, six names were on the Republican ballot, including four well-funded candidates. Ricketts defeated then-Attorney General Jon Bruning by one percentage point, or 2,347 votes.

Pillen said he’s “the most conservative candidate” in the race and that he’ll “preserve and defend the commonsense, Christian, conservative values” in Nebraska.

“Here in Nebraska, we think for ourselves, care for our neighbors, and care about what our neighbors think,” Pillen said when asked if Trump’s backing is essential to victory. “The polling is clear: Republican voters are going to make up their own minds about who our Republican gubernatorial nominee is.”

The 66-year-old Pillen, a former University of Nebraska defensive back, noted that he voted for Trump in 2016 and 2020 and that he’s “thankful for all his administration accomplished for America.”

He said he’ll eliminate critical race theory at the University of Nebraska and ban transgender women from participating in women’s sports or using women’s bathrooms.

Pillen noted that he’s the only candidate “to earn a living day in, day out in production agriculture.”

“My conservatism isn’t just my platform in this campaign. It’s the way I’ve built my business, raised my family, and lived my life,” he said.

More than 8,000 Democrats have changed their voter registration to Republican so that they can participate in the Republican gubernatorial primary election, according to the Lincoln Journal Star.

Those Nebraskans may cast votes for Lindstrom, who’s more moderate than Herbster and Pillen, according to speculation from multiple Nebraska media outlets.

When Ben Nelson was reelected to a second term in 1994, he became the last Democrat to be elected as the governor of Nebraska.

Lindstrom has been targeted with attack ads that portray him as a liberal because of how he has voted as a state senator.

“You wouldn’t be the subject of attack ads if you weren’t in the mix,” Lindstrom said. “I don’t get caught up in them. I don’t take it personal. I don’t care because I know how I voted and why I voted the way I did. I think most Nebraskans can see through them.”