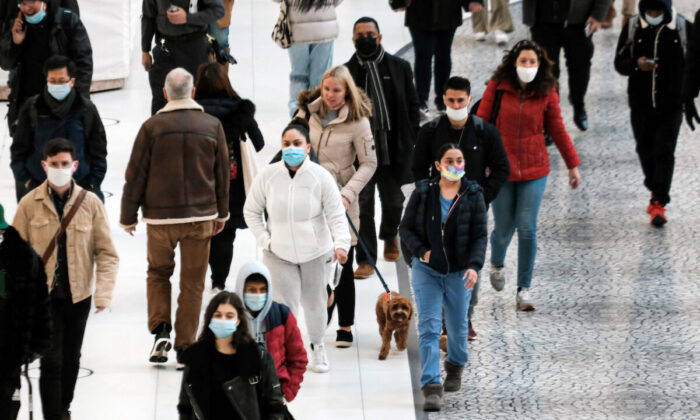 People wear masks at an indoor mall in The Oculus in lower Manhattan on the day that a mask mandate went into effect in New York on Dec. 13, 2021. (Spencer Platt/Getty Images)
US News

Nearly Three-Quarters of US Counties Saw Spike in Deaths in 2021, Census Data Show

Nearly three-quarters of counties in the United States experienced a spike in deaths in 2021, according to newly released Census data.

A natural decrease in population happens when more deaths occur than births over a given period of time, in this case from July 2020 to July 2021.

Fewer births, an aging population, and increased mortality further exacerbated by the pandemic also contributed to a hike in natural decrease, according to the Census Bureau.

The bureau’s data suggest that some counties experienced population declines because of migration, as many Americans relocated to less populous or less expensive areas during the pandemic.

Counties with the largest international migration losses, meaning that more people moved out of the country than moved in, were found in California (41.4 percent), Oregon (27.8 percent), and Mississippi (23.2 percent), according to the data.

The states of Alaska (80.0 percent), Louisiana (71.9 percent), and Illinois (65.7 percent) had the highest percentages of counties with net domestic migration loss, which is when people move from one area of the United States to another.

Overall, most counties (2,063 or 65.6 percent) experienced “positive domestic migration” from 2020 to 2021, meaning that there were more people entering than leaving those areas.

Arizona’s Maricopa County welcomed the most residents from domestic migration, at 46,866, followed by Riverside County, California, with 31,251, and Collin County, Texas, with 30,191 residents.

New York was, at one point in the spring of 2020, the epicenter of the COVID-19 pandemic in the United States.

“The patterns we’ve observed in domestic migration shifted in 2021,” said Dr. Christine Hartley, assistant division chief for estimates and projections in the Census Bureau’s Population Division. “Even though over time we’ve seen a higher number of counties with natural decrease and net international migration continuing to decline, in the past year, the contribution of domestic migration counteracted these trends so there were actually more counties growing than losing population.”

Micro areas in the United States, or smaller locales, diverted from previous trends, experiencing a slightly faster growth (0.2 percent between 2020 and 2021) than metro areas, which increased by 0.1 percent.

Overall, five of the top 10 largest-gaining counties in 2021 were in Texas in the counties of Collin, Fort Bend, Williamson, Denton, and Montgomery. They gained a combined total of 145,663 residents.

Los Angeles County, which has had the highest number of deaths from COVID-19, experienced the largest population loss of any county, losing a total of 159,621 residents in 2021.

Previous data released in August 2021 show that the U.S. population also grew by just 7.4 percent during the previous decade, which is the second slowest growth on record.

Only the decade spanning the 1930s—when the Great Depression occurred—had a slower growth rate.