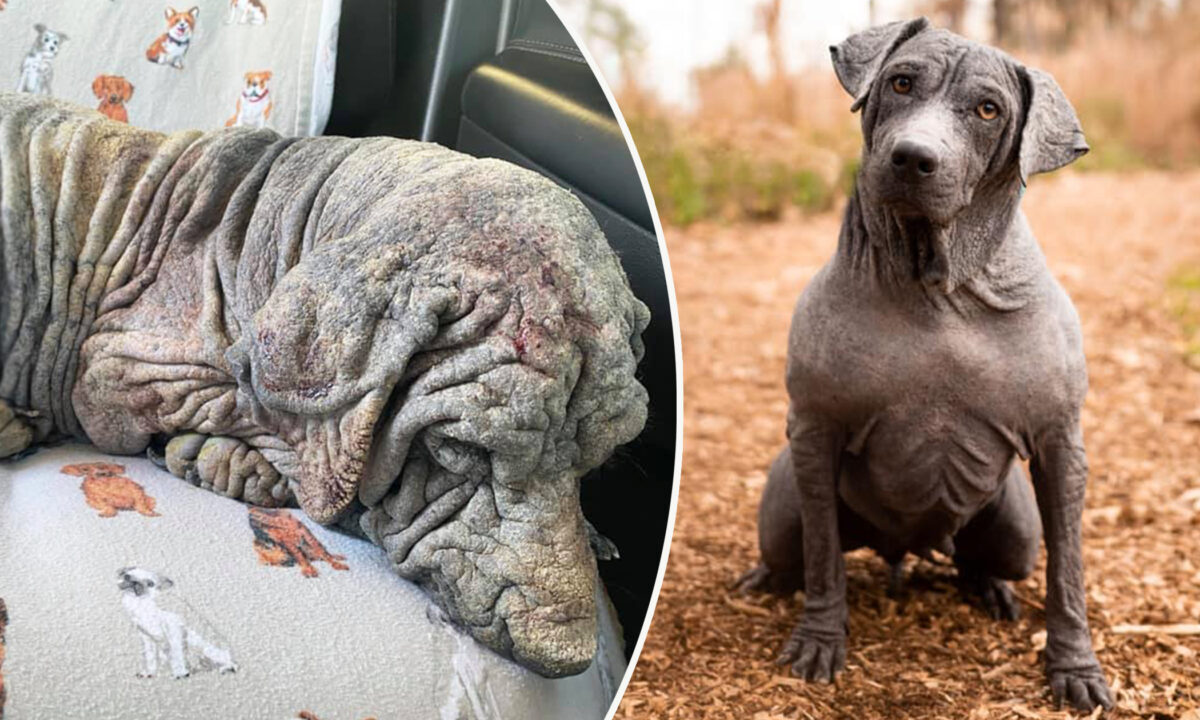 WARNING: THIS ARTICLE INCLUDES GRAPHIC IMAGES THAT SOME READERS MAY FIND DISTURBING.

A severely neglected dog found scavenging in Texas woodland with a small pack of strays has undergone a radical transformation since being rescued.

Madelyn, a 5-year-old mixed-breed dog, was in such a poor condition when she arrived at the non-profit animal welfare group ThisIsHouston that volunteers described her spirit as “broken.”

“Her fur is gone. Her entire body hurts,” the group wrote on their social media page.

“Her mind is wondering what she did wrong. Her heart is torn. This is what happens when a living animal is ignored for so long.

“This baby knew nothing but pain and misery for her entire life. She’s 5 years old and has been completely failed by humans.”

Madelyn was diagnosed with an enlarged heart, heartworm, hookworms, chronic dry-eye, and sarcoptic mange. With barely any fur left on her body, Madelyn appeared before her rescuers shivering and “nearly lifeless.”

The rescuers are clueless on how Madelyn came to be in such poor health, nor do they know whether she was ever owned.

“Being turned into the shelter was the best thing that could’ve happened to her,” ThisIsHouston wrote.

“You are safe now, sweet Madelyn. We will show you that you are worthy of attention, time, spoiling, love, and all things you can imagine.

“You just need to fight, and we will do the rest,” they wrote.

Wrapping her in a T-shirt to keep her warm, the volunteers took Madelyn to and from her preliminary vet appointments, where she was treated for her various ailments, funded by kind donations from well-wishers.

The gentle dog was placed in a safe, loving foster home to recuperate. Reporting on her progress, the rescue group described her as “blossoming into a sweet girl with a huge personality.”

Sharing photos of Madelyn luxuriating on soft blankets in her foster home in November last year, ThisIsHouston marveled at the change in both her health and her spirit.

While Madelyn still had some residual skin issues, they said, she was so much happier. Later, things got even better.

“She is a VERY friendly dog and wants to be friends with everyone,” her rescuers wrote.

“She is also a couch potato!”

Madelyn still has a way to go before her skin is 100 percent healed, at which point she can be spayed and complete her heartworm treatment. Her rescuers are excited for Madelyn to find her forever home and enjoy the life of luxury she deserved all along.

“We know it’s somewhere out there!” they said.