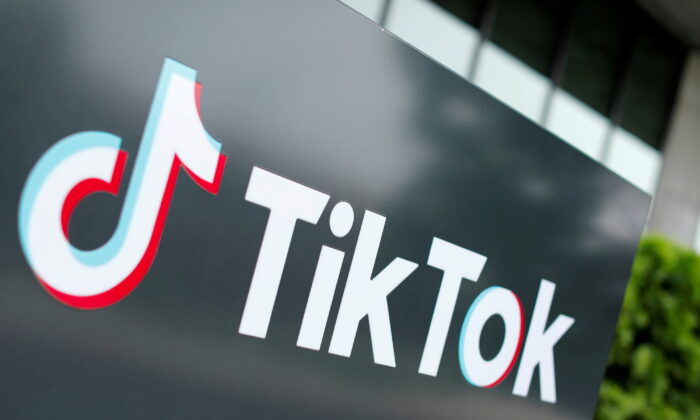 The TikTok logo is pictured outside the company's U.S. head office in Culver City, Calif. on Sept. 15, 2020. (Mike Blake/Reuters)
By Cathy He

Almost 60 percent of Americans believe that the Chinese-owned short video app TikTok should be removed from app stores after revelations that U.S. user data have been repeatedly accessed in China, according to a new poll.

In a survey conducted by the Convention of States Action and Trafalgar Group, 58.6 percent of respondents said they supported “efforts to remove TikTok from app stores now that the company has revealed Americans’ user data can be accessed by TikTok employees in China.”

Meanwhile, 17.8 percent of respondents said they opposed such action, while 23.6 percent said they weren’t sure. The poll, which was conducted from July 7 to July 10 and surveyed more than 1,000 likely 2022 election voters, has a margin of error of plus or minus 2.9 percentage points.

The results come less than a month after leaked recordings of internal company meetings obtained by BuzzFeed News allegedly show that from at least September 2021 to January, engineers in China had access to the app’s U.S. data.

TikTok employees, at times, had to turn to their colleagues in China to determine how U.S. data were flowing, as the U.S. staff wasn’t authorized to independently access that information, according to the report.

The July survey shows that independents (56.9 percent) and Republicans (76.8 percent) were more likely to support measures to remove TikTok, while 39.2 percent of Democrats agreed with such a proposal.

The recent revelations have renewed scrutiny of the app, owned by Beijing-based ByteDance, that officials and experts say may be used by the Chinese Communist Party (CCP) for espionage and to conduct information operations. They cite national security laws in the country that compel companies to cooperate with Chinese intelligence agencies when asked.

TikTok has repeatedly denied such allegations, saying that it stores U.S. user data on servers outside of China and that it would never allow the regime in Beijing to access such information.

“TikTok is just another invasive tool for communist China to infiltrate Americans’ personal and proprietary information,” Rep. Ken Buck (R-Colo.) previously told The Epoch Times. “This app presents a very real threat to our national security, and the United States should take strong action to stop the CCP’s espionage campaign.”

The Trump administration had sought to ban the social media app, citing data security risks. But President Joe Biden later reversed the measure and instead ordered the Commerce Department to evaluate the platform to determine whether it poses a national security risk.

In addition to U.S. user data being accessed by Beijing to conduct espionage operations, TikTok may also be used to shape Americans’ perceptions to be favorable to the Chinese regime, according to Mark Meckler, former interim CEO of social media platform Parler and president of the Convention of States Action, the advocacy group that commissioned the survey.

Meckler described TikTok as one part of the communist regime’s long-running “digital warfare against the United States.” He pointed to the Chinese military’s concept of “total war,” which seeks to leverage an array of methods and arenas outside of traditional warfighting domains, such as media and culture, to overcome the enemy.

“This is just one more slice in that pie, giving the Chinese Communist Party an opportunity to do damage to the United States by affecting the culture of young people,” Meckler said.

Representatives for TikTok didn’t respond to a request for comment by press time.