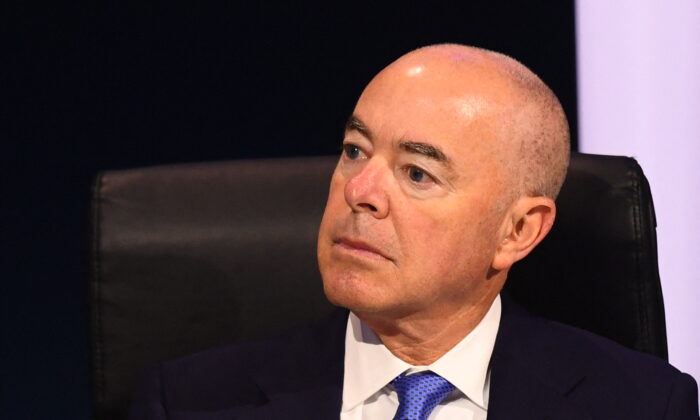 Nearly 22,000 Department of Homeland Security (DHS) employees have sought exemptions to the U.S. government’s federal COVID-19 vaccine mandate, but the requests all remain in limbo, according to newly obtained documents.

Key agencies within DHS could face a massive loss of workers if the requests aren’t resolved, a watchdog warns.

More than 8,100 Customs and Border Protection employees, who include Border Patrol agents, have asked for a medical or religious exemption to the mandate that was imposed by President Joe Biden in 2021. In addition, more than 5,800 Transportation Security Administration workers have requested accommodations, while more than 2,800 Immigration and Customs Enforcement employees have sought exemptions on religious or medical grounds.

None of the requests have been acted upon yet, DHS told the Functional Government Initiative (FGI), the watchdog that obtained the data.

Biden ordered agencies to implement the mandate in September 2021. While the government workers were told to get vaccinated, they were also advised that they could apply for medical or religious exemptions.

The Biden administration was sued over the mandate, with lawsuits alleging it was unconstitutional. Feds for Medical Freedom, a group of government workers, filed one of the suits.

The group won an injunction against the mandate in January. U.S. District Judge Jeffrey Brown, a Trump appointee, said the mandate fell outside of the president’s powers.

The government’s vaccine workforce, based on the ruling, told agencies to “take no action to implement or enforce” the mandate.

In compliance with the injunction, “DHS halted the review process and has not taken any action to implement or enforce the vaccination requirement” as of Jan. 24, Rosemary Law, a DHS Freedom of Information Act officer, told FGI in documents reviewed by The Epoch Times.

That means no exemptions have been granted, she indicated.

The watchdog asserts the government should continue processing the requests, so that employees know if they’re in danger of being fired.

“They absolutely should have been processing these so that the people who have filled out these exemption requests kind of have an idea of where it’s going to go because, right now, we have 22,000 people wondering if they’re going to have a job,” Pete McGinnis, a spokesman for FGI, told The Epoch Times.

Many of the employees who have asked for an exemption work on immigration matters, including thousands stationed at or near the U.S.–Mexico border. The Biden administration already is grappling with an illegal immigration crisis that has broken records for the number of arrests at the border, and firing immigration officers would make things worse, McGinnis added.

DHS officials didn’t respond to a request for comment.

Of the other DHS components, the number of workers who have asked for exemptions are: more than 1,700 at the Federal Emergency Management Agency, nearly 1,300 at the U.S. Citizenship and Immigration Services, 680 with the U.S. Coast Guard, nearly 500 at the U.S. Secret Service, 333 at DHS headquarters, 167 at Federal Law Enforcement Training Centers, and just over 100 with the Cybersecurity and Infrastructure Security Agency.

The case regarding the mandate has since moved forward. An appeals court panel overturned Brown’s decision, but later dissolved that ruling as the full court prepares to hear arguments from the parties.