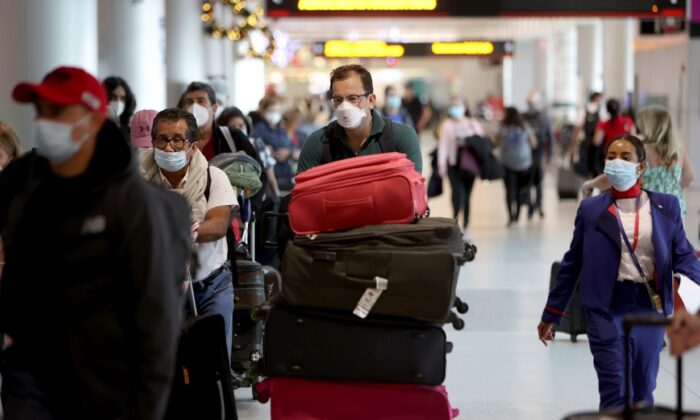 More than 2,200 flights have been canceled on Jan. 2, the day after New Year’s, amid staffing shortages and poor weather conditions in some parts of the United States.

Some 2,233 flights within, into, or out of the United States were canceled on the morning of Jan. 2, according to tracking website FlightAware. About 3,000 delays have been reported, the website’s data show.

The mess of flight cancellations can be blamed, in part, on snowstorms that have affected O’Hare and Denver’s airport. Some have suggested that flight crew shortages are also to blame amid a bevy of COVID-19-related sick calls in recent days, which have likely been exacerbated by airlines’ vaccine requirements for staff.

SkyWest Airlines, which operates flights for American, Delta, United, and Alaska airlines, saw the most cancellations on Jan. 2. About 20 percent of its scheduled flights, or 479 flights, were scuppered, the data show. Mesa Airlines, Envoy Air, and Air Wisconsin—also regional carriers—canceled dozens of flights on Jan. 2.

Among national carriers, Southwest Airlines canceled about 11 percent of its flights, or about 411 of them, on Jan. 2. The Dallas-based firm told media outlets that it suspended operations in Chicago over the weekend due to a snowstorm.

Delta Air Lines also saw about 160 flights, or 6 percent, get canceled on Jan. 2. Delta Chief Executive Ed Bastian asked the Centers for Disease Control and Prevention (CDC) in December to cut the isolation time for people who test positive for COVID-19, the disease caused by the CCP (Chinese Communist Party) virus, from 10 days to five days—and the CDC has recently changed its recommendations to five days.

JetBlue canceled about 169 flights, or 16 percent, on Jan. 2, coming after the New York-based firm recently said it would proactively cancel about 1,300 flights due to staffing issues. In 2021, JetBlue Chief Executive Robin Hayes announced that employees at the firm, which is a federal contractor and must comply with the Biden administration’s vaccine mandate, would have to get vaccinated, leading to some layoffs.

On Jan. 1, about 2,300 flights in the United States were canceled, continuing a trend of widespread cancellations that has lasted for more than a week. Some carriers have blamed the rise in Omicron coronavirus variant cases, leading to staffing shortages, while others have said the travel demand for Christmas and New Year’s is high.

Over the past week, about 15,000 flights have been canceled in the United States, according to an analysis of reports.

“The nationwide spike in Omicron cases has had a direct impact on our flight crews and the people who run our operation,” a United Airlines spokesperson told media outlets on Jan. 1. “As a result, we’ve unfortunately had to cancel some flights and are notifying impacted customers in advance of them coming to the airport.”

The Federal Aviation Administration (FAA) warned on Dec. 30 of even more travel delays in the coming days due to COVID-19 infections among FAA employees, as well as “weather and heavy seasonal traffic.” On Dec. 30, the TSA screened about 2,049,604 people at airport checkpoints across the United States, down slightly from 2,392,331 in 2019—but much higher than 2020 levels.

Also, outside of the United States, about 1,500 flights have been canceled—with the bulk apparently occurring among Chinese carriers, FlightAware data show.