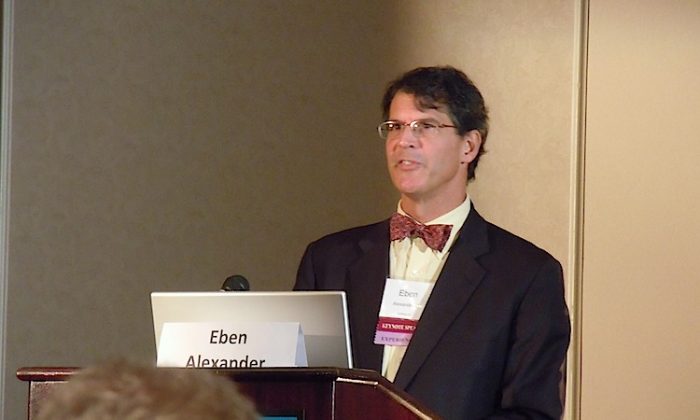 Eben Alexander talked during the International Association for Near-Death Studies (IANDS) conference about his near-death experience and his interpretation of the phenomenon. (Stephanie Lam/The Epoch Times)
Beyond Science

A neurosurgeon’s perspective
By Stephanie Lam

This article is the fifth of our five-part series on near-death experiences, exploring decades of research on the topic. Click HERE to start with Part 1.

DURHAM, N.C.—Eben Alexander was your typical neurosurgeon. A firm believer of scientific reductionism, he thought that all thoughts originate from the brain. But this changed in 2008 when he encountered a case of near-death experience (NDE).

As much as it was the complete opposite of his previous views, he couldn’t dismiss or avoid the case—it was none other than his own experience, and he had to face it and search for an explanation.

Having contracted acute bacterial meningitis, which damages the neocortex—the part of the brain that is thought to involve complex cognitive functions like conscious thought—Alexander went into a coma and spent six days on a ventilator. The chance of survival was very slim, and less so was the possibility of recovering fully.

However, during the time when he was in coma, Alexander encountered vivid experiences involving multiple senses, such as vision, hearing, and smell. He said that he couldn’t describe how amazing it was.

“What happened deep in coma was absolutely stunning,” Alexander said during an interview.

“The whole situation seems to be much more real than our earthly life, and the sensory modalities were very strange because they were, you know, when I was remembering all this and trying to write it down, a lot of the kind of auditory and visual things that we would normally think of as things that we see or hear, were all kind of blended together.”

For example, he “saw” a beautiful melody appearing as colors in front of him, and he remembered gold and silver arcs of lights as transparent arcs of energy that he perceived as sounds.

“To compare it with sitting here and talking on the phone or working on my computer, it was much, much more real, very rich, and as if I were truly being alive for the first time,” Alexander said. “It was really amazing.”

“My brain right now—I think it recovered pretty well—could not do anything close to what my brain was doing deep in coma,” Alexander said in this year’s International Association for Near-Death Studies (IANDS) conference.

“How does a dying brain end up getting far, far more powerful and able to handle these tremendous loads of information instantaneously and put it altogether?”

“For me the problem was how to explain the hyper-reality. How do I explain such a rich experience, such an interactive experience, one with so much very vivid, and auditory and visual components when the parts of my human brain that normally handle all that were infected with meningitis and were not working. And especially how was it that the mind would experience consciousness, and handling very complex tasks?” Alexander said during the interview.

For months after the coma, Alexander thought about his NDE and tried to explain it from a neuroscientific standpoint. He came up with about seven hypotheses, but later found that none were able to explain fully what happened.

“The standard neuroscientific explanation […] absolutely does not address the real powerful elements of the experience,” he said.

“Any scientists who doubt the reality of such extraordinary near-death experiences should begin by explaining the fundamental mechanism of conscious awareness. The evidence for the reality of many related phenomena, such as remote viewing and influence, and out-of-body phenomena, is overwhelming. The reductive materialist view of physical reality, as it currently stands, is not going to fully explain consciousness,” he said.

Alexander has since looked into quantum mechanics as it seems to offer some insights into the phenomenon of consciousness, and thus to NDEs.

“When the enigma of the interpretation of their experiments first came to light more than 80 years ago to the founding fathers of quantum mechanics, such as Albert Einstein, Niels Bohr, Erwin Schrödinger, Werner Heisenberg, and Max Planck, they knew their experiments revealed a deep mystery. It was such a mystery because it dealt with the intersection of reality and consciousness. It is even more of a mystery today, as revealed by ever more refined experiments,” he said.

Experiments in quantum mechanics have found that it is impossible to precisely measure a photon or electron’s (or other subatomic particle’s) position and momentum at the same time. These entities would behave like waves or particles, depending on the choice of a conscious observer about how to measure them. The exact measurement result seemed to be arbitrarily chosen from a range of possibilities, but was not exact until the measurement was consciously observed.

An experiment done in 2000 even found that an observation made in the future of a particle could affect the behavior of an entangled particle (one that was generated in the same single process) in the past. The experiment was set up for particles to pass through a double-slit apparatus and end up in four different locations, and the researchers found that just by observing which location the particles arrive at, their behavior back at the double-slit apparatus would be affected.

“I’m worried that some of the physics community today doesn’t sense the same deep mystery behind it all, as did the brilliant founding fathers of the field. The experimental results have gotten even more bizarre with more refined experiments, but many who work with quantum physics overlook the extreme mystery at its most basic level. Quantum mechanics is such a basic part of our lives that a third of our economy (cell phones, GPS, television, computers, all the semiconductor technology, etc.) is based in the physics and mathematics of quantum mechanics. It’s been proven to work very well, but they got away from the deep mystery that is there when you look at the basic experimental results. They indicate that consciousness is crucial in the determination of physical reality,” Alexander said.

It has recently been discovered that quantum phenomena also happen in biological processes such as human olfaction, bird migration, and photosynthesis. Alexander thinks that quantum processes might also be involved with human consciousness.

“The main role in my view for quantum mechanics is that it provides the ‘smoking gun,’ that shows us there’s something special about consciousness in making reality,” he said.

“It suggests that we’re missing a big point about our consciousness and exactly how it interacts with reality. […] I don’t think that by chasing quantum mechanical phenomena to a certain degree that we will come up with the answer about mind and consciousness, although I think it will be very helpful at elucidating the mind-brain interface.”

Read from the beginning of this series HERE.