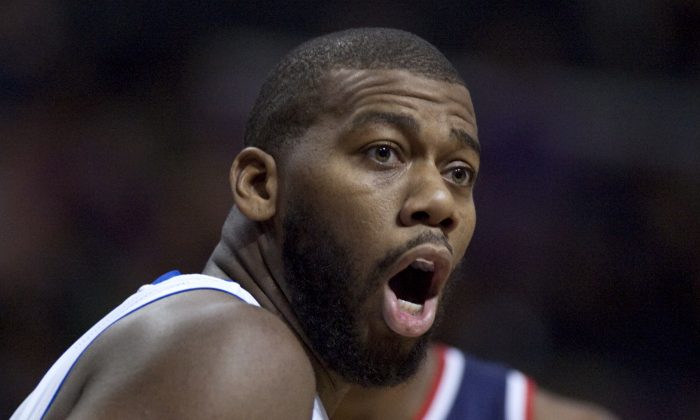 Detroit Pistons center Greg Monroe (10) reacts after being whistled for a foul during the first half of an NBA basketball game against the Washington Wizards, Monday, Dec. 30, 2013, in Auburn Hills, Mich. (AP Photo/Duane Burleson)
NBA

NBA rumors keep flying leading up to the draft and free agency.

Let’s check out the latest rumors.

Adam Zagoria of NBA.com reported that the Utah Jazz love Dante Exum at No. 5, the Sacramento Kings like Nik Stauskas at No. 8, and the Charlotte Bobcats like Doug McDermott at No. 9.

But the Kings might not pick anyone at all, according to the Boston Globe. The team is shopping their contract, “realizing they don’t need another 19-year-old on their roster if they are planning to win soon. They also have to encourage Rudy Gay not to opt out of the final year of his contract at $19 million and stay a King.”

Multiple sources confirmed with ESPN that the Kings want to trade the pick.

And HoopsRumors said that the Atlanta Hawks have been talking with the Kings about the pick.

A number of teams are expected to go after the Detroit Pistons center, who will be a restricted free agent on July 1.

One of those teams could be the New Orleans Pelicans, reported Nola.com.

The Pelicans don’t have enough cap space to sign Monroe but have made initial inquiries about working out a sign-and-trade.

The Los Angeles Lakers, Dallas Mavericks, and San Antonio Spurs are also expected to be in the running for Monroe, who could also return to the Pistons.

There’s been a lots of rumors about James, especially after Miami got pummeled in the finals. But James won’t give any insight into his thought process yet.

“I will deal with my summer when I get to that point. Me and my team will sit down and deal with it.” James said, reported Alex Kennedy of Basketball Insiders via Twitter.

Yahoo reported that James will at least look at the viable options before returning to the Heat.

Among the teams James has been linked to are the Chicago Bulls, Houston Rockets, and Phoenix Suns.

The center, who turned 38 last month, is so far expected to return for the final year of his contract (likely to the chagrin of Nets fans).

“Nets continuing to operate with the belief that Kevin Garnett will return next season, sources say. KG has been in contact with the team,” reported Chris Mannix of Sports Illustrated via Twitter.

Garnett had an unproductive season last year, playing in only 54 regular season games and averaging 6.5 points. He also didn’t play well in the playoffs.

Newsday’s Rod Boone reported on comments that coach Jason Kidd said after the Nets were knocked out of the playoffs by the Heat: “The biggest thing & concerns that I’ve talked to him about is you don’t want to leave with someone carrying you off the court.”

The Nets may not be able to retain Blatche, who will become a free agent this summer.

“I’m hearing there is mutual interest between the New Orleans Pelicans and free-agent-to-be Andray Blatche. Keep an eye on that after July 1,” reported Alex Kennedy of Basketball Insiders.

Blatche had a pretty good year for the Nets last year, although he was still inconsistent.