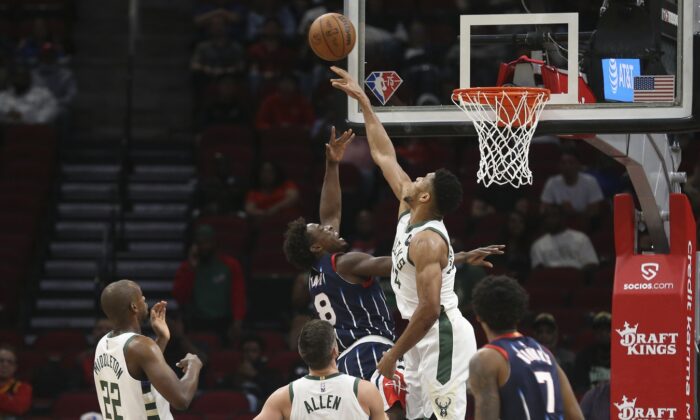 Antetokounmpo posted 41 points and 17 rebounds and added five assists, three steals, and two blocked shots. In the Bucks’ closing run, he nailed a 3-pointer, assisted on a Portis corner 3, and launched a ferocious dunk with 47.6 seconds left that pushed the lead to 119–112.

Kevin Durant scored 31 points on 12-of-22 shooting and James Harden collected 20 points and 11 assists to lift visiting Brooklyn to a victory over Atlanta.

LaMarcus Aldridge and Bruce Brown each had 15 points for the Nets, who exploited the interior by scoring 66 points in the paint. Brooklyn also stepped it up in the fourth quarter, outscoring the Hawks by a 24–14 margin.

Trae Young recorded 31 points and 10 assists, marking the fifth straight game he has reached at least 25 and 10, respectively.

JaVale McGee had a season-high 21 points and grabbed 15 rebounds as shorthanded Phoenix coasted past visiting Boston for its 20th win in 21 games.

Jayson Tatum had a game-high 24 points and seven rebounds for Boston, which dropped its third straight game and ended its five-game West Coast road trip at 1–4.

LeBron James made his presence felt from the start and scored 33 points to lead Los Angeles over host Oklahoma City.

James was 13 of 20 for the field, including 9 of 10 in the first half. Avery Bradley fueled the Lakers on both ends of the court in the third quarter, with 11 points and three steals. Bradley scored a season-high 22 points, going 8 of 14 from the field with six 3-pointers.

Oklahoma City missed its first 12 3-pointers, not hitting one from beyond the arc until early in the second quarter. The Thunder finished 10 of 44 on 3-pointers. Rookie Tre Mann led Oklahoma City with a season-high 19 points.

Domantas Sabonis added 24 points, 10 rebounds, and seven assists as the Pacers won a third straight game for the first time this season. Myles Turner contributed 17 points and 10 rebounds and Malcolm Brogdon had 12 points and eight assists for Indiana.

Luka Doncic registered 27 points, nine rebounds, and nine assists for the Mavericks, who have lost nine of their past 12 games. Kristaps Porzingis tallied 22 points, Tim Hardaway Jr. added 15, and Jalen Brunson had 14 points and seven rebounds.

Rookie James Bouknight had a breakout game with 24 points for the Hornets, while Miles Bridges notched 23 points, Kelly Oubre Jr. scored 22, and Martin and Gordon Hayward finished with 19 apiece.

Gary Trent Jr. scored 24 points, including a go-ahead 3-pointer with 1:11 to play in the fourth quarter, and Toronto defeated visiting New York.

Fred VanVleet added 17 points and 11 assists for the Raptors, who have won both meetings with the Knicks this season. Scottie Barnes had 12 points and career-best 15 rebounds for Toronto, Pascal Siakam had 13 points and 12 rebounds, and Chris Boucher scored 14 points.

Obi Toppin had career highs of 19 points and 10 rebounds for the Knicks. RJ Barrett also had 19 points, and Julius Randle had 13 points and 14 rebounds, although he missed a go-ahead 3-pointer in the final seconds.

Jarrett Allen, Kevin Love, and Darius Garland each registered a double-double and Cleveland cruised past Minnesota in Minneapolis.

Allen finished with 21 points and 10 rebounds, Love notched 18 points and 13 rebounds, and Garland had 12 points with 12 assists for Cleveland, which has won back-to-back games. Lauri Markkanen added 19 points on 7-for-8 shooting and Isaac Okoro contributed 16 on 7-for-10 shooting.

Karl-Anthony Towns led the Timberwolves with 21 points to go along with seven rebounds. Malik Beasley scored 15 points off the bench and Anthony Edwards had 13 for Minnesota, which has lost five games in a row.

Trey Lyles scored 18, Cade Cunningham added 16, and Hamidou Diallo, Jerami Grant, and Saddiq Bey each had 11 for the Pistons, who have won just four games and last won Nov. 17.