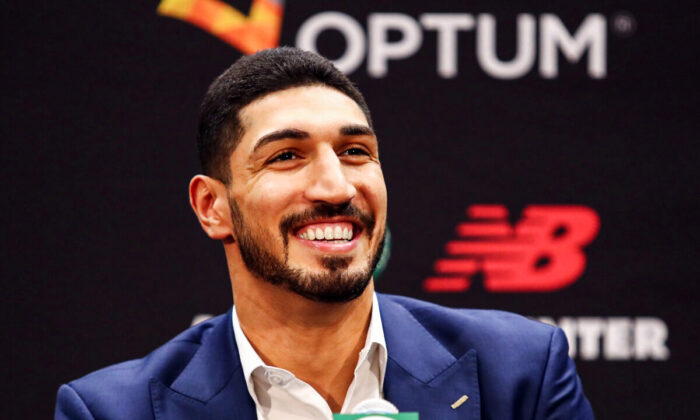 Enes Kanter reacts during a press conference as he is introduced as a member of the Boston Celtics at the Auerbach Center at New Balance World Headquarters in Boston on July 17, 2019. (Photo by Tim Bradbury/Getty Images)
NBA

Boston Celtics center Enes Kanter has legally changed his name to Enes Kanter Freedom as part of the process of becoming a U.S. citizen.

The 29-year-old NBA player made his name change official on his Twitter account, changing his handle to @EnesFreedom, after completing his citizenship oath ceremony on Nov. 29. Going forward, Kanter will be his middle name, and Freedom will be his new last name.

The news was first reported by sports news website The Athletic.

Kanter, a native of Turkey, has been banned from traveling to his home country by the administration of President Recep Tayyip Erdogan due to his political views. Turkey revoked his passport in 2017.

In recent months, Kanter has been vocal about human rights issues in China and criticized the Chinese Communist Party’s (CCP) treatment of the Uyghur people.

Rights groups, researchers, former residents, and some Western lawmakers say that Xinjiang authorities have facilitated forced labor by arbitrarily detaining around 1 million Uyghurs and other ethnic minorities in a network of camps in the northwestern region.

He has also spoken up on behalf of the Tibetan people.

“I’m here to add my voice and speak about what is happening in Tibet under the Chinese government’s brutal rule. Tibetan people’s basic rights are nonexistent,” Kanter said in a short video on Nov. 20.

Chinese communists forcibly took control of Tibet in 1951, and over the years, the regime has intensified its control over the local population, forcing monks and nuns to resume secular life and promoting Mandarin Chinese over the Tibetan language.

Kanter also wore shoes emblazoned with the words “Free Tibet” to an NBA game against the New York Knicks at Madison Square Garden on Nov. 20, which has led Chinese video-streaming platform Tencent to cut its broadcast.

On Nov. 16, he criticized Beijing for its industrial-scale killing of prisoners of conscience for their organs.

“Stop murdering for organs. It’s a crime against humanity,” the Turkish player wrote in a social media post.

On Nov. 19, he called out NBA superstar LeBron James in a tweet over his ties with Nike, slamming James for taking a “Money Over Morals” approach on Nike’s alleged use of slave labor in China to produce its goods.

“Sad & disgusting how these athletes pretend they care about social justice. They really do ‘shut up & dribble’ when Big Boss [China] says so,” Kanter said on Twitter.

James responded to his tweet by saying that he will not waste his energy on Kanter, accusing him of trying to use his name for himself.

Separately, on Nov. 23, Kanter called for a boycott of the Beijing 2022 Olympic Winter Games in protest of human rights abuses in the country.

“The genocidal Chinese government and the insecure tyrant behind it all Xi Jinping must not be allowed to host the upcoming Winter Olympics. Say NO to @Beijing2022!” Kanter wrote, along with a series of pictures of some shoes emblazoned with messages targeting China.

He has also voiced his support for Taiwan, prompting Taiwanese President Tsai Ing-wen to thank him directly.

Isabel Van Brugen and Eva Fu contributed to this report.