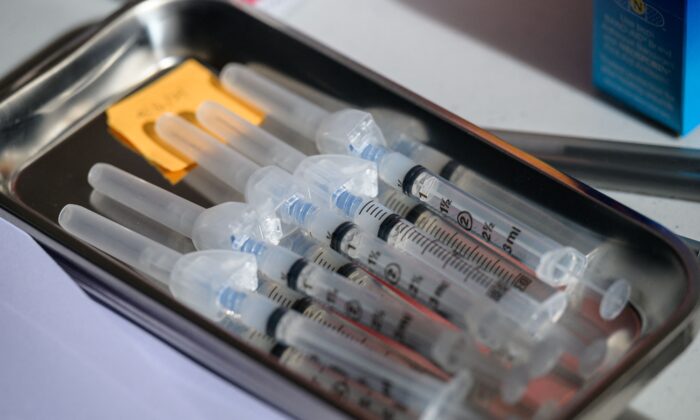 Syringes with a COVID-19 vaccine inside them are seen in New York City in a file photograph. (Angela Weiss/AFP via Getty Images)
Vaccines & Safety

Navy SEALs have been informed by their superiors that they won’t be deployed if they refuse to get a COVID-19 vaccine, even if they’re granted a religious or medical exemption, according to lawyers representing the elite special operations troops and a document seen by The Epoch Times.

“What they’ve been told is if they apply for a religious accommodation, they will no longer be deployable,” R. Davis Younts, who is representing seven SEALs and is in talks to take on approximately 20 others, told The Epoch Times.

Timothy Parlatore, whose firm represents a number of SEALs and other service members concerned about the vaccines, said his clients have also been given a similar ultimatum.

Some SEALs have even been sent home mid-deployment for refusing a vaccine, one of his clients told him.

A document presented to the SEALs says that any special operations personnel, including Special Warfare Combatant-Craft Crewmen, “who refuse to receive the COVID-19 vaccine based solely on personal or religious beliefs will be disqualified from [special operations] duty.” It was signed by Capt. Liam Hulin.

“This will affect deployment and special pays,” the document also states. “This provision does not pertain to medical contraindications or allergies to vaccine administration.”

The reasons the SEALs don’t want a shot are the same as many unvaccinated Americans. They believe they have so-called natural immunity, or protection against reinfection after getting COVID-19 and recovering. And a subset are Christians who don’t want any medicines that are developed using cells from aborted fetuses.

“These guys are not anti-vax, they just—given the extraordinarily low risk of COVID to them and the substantial risk of unknown long-term effects of the vaccine—they aren’t comfortable with it right now,” Parlatore told The Epoch Times.

While the exact number of SEALs considering not getting a vaccine isn’t known, both Parlatore and a pastor who is advising some of them say it’s in the hundreds. The loss of that many SEALs could devastate the elite force, which has 2,450 active-duty members. So far, lawyers haven’t been successful in attempts to convince military leaders to alter the harsh mandate.

Shortly after U.S. drug regulators in August approved Pfizer’s COVID-19 vaccine, Defense Secretary Lloyd Austin ordered troops to be vaccinated. Austin directed the heads of every branch to draft requirements, which are all similar. Navy Secretary Carlos Del Toro issued a vaccine mandate on Aug. 30 that said active-duty Navy personnel would have to be fully vaccinated, or have a full vaccine regimen, by Nov. 28.

The Department of Defense (DoD) has previously said troops can request exemptions, but no exemptions were outlined in the order and sailors were told they would face punitive measures if they don’t comply.

The Navy declined to answer questions for this article. The Naval Special Warfare Command didn’t respond to a request for comment.

Younts is pursuing religious exemptions for his clients, while Parlatore is primarily focusing on medical exemptions.

Pastor Jeff Durbin, who heads Apologia Church in Mesa, Arizona, is ministering to some of the SEALs. He says they’ve gotten required vaccines in the past but are worried about what they see as insufficient safety data, particularly regarding long-term effects. The two main vaccines were authorized in December 2020.

“They see this as a violation of the government’s responsibilities and role in terms of being able to mandate a new technology that’s never been employed before with very suspicious, and even alarming safety data,” Durbin told The Epoch Times.

Federal health officials say that trial data and information from other sources show the vaccines are safe and effective. Critics note that the number of reports of adverse events and deaths following vaccination has skyrocketed and is much higher for COVID-19 vaccines than any other type of vaccine. The Pfizer and Moderna shots use messenger RNA technology, which is new and hadn’t been used in approved vaccines before.

Some of the SEALs have verified they’ve been infected with COVID-19, the disease caused by the CCP (Chinese Communist Party) virus, in the past. That means, according to experts and a slew of studies, that they enjoy a high level of immunity against reinfection. But there’s no acknowledgment for the immunity in the mandates. U.S. requirements have virtually all ignored natural immunity while some European countries allow it as an alternative to vaccination.

“Natural immunity has not been taken into consideration. In the past for the vaccines there was a denoted exception or accommodation that can be made for someone if they had the immunity, or serology showing it, they wouldn’t have to take that vaccine. That’s not the case in this vaccine,” Younts said.

The lawyers are trying to convince the military to ease up on the mandate and approach the situation differently, especially in light of the anthrax vaccine program, which was deemed illegal and left many service members with adverse reactions.

“Whenever there’s something like this, where they provide very little information about the safety of the vaccine, and instead just threaten everybody ‘take it or else,’ that causes natural resistance,” Parlatore said. “Don’t forget, this is the same community that was given the anthrax vaccine without proper safety protocols, which a judge ended up stopping. So DoD, unfortunately, hasn’t built up a lot of trust with forcing people to take relatively new vaccines.”