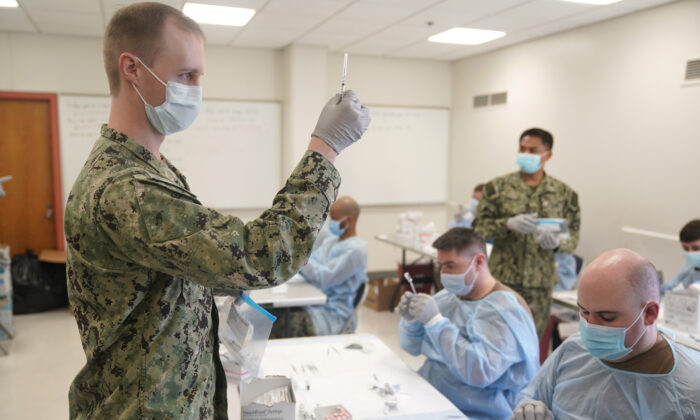 Navy: Sailors Denied Vaccine Mandate Exemptions Have Five Days to Get a Shot

U.S. sailors who have their attempt to secure an exemption to the military’s COVID-19 vaccine mandate rejected have five days to get a jab, according to updated guidance released Monday.

If they do not, commanders will begin processing them for discharge, the Navy said.

The mandate deadline is Nov. 28 for active-duty sailors. Reserves have until Dec. 28 to become fully vaccinated against the virus that causes COVID-19.

Fully vaccinated refers to both getting a full vaccination regimen and at least two weeks elapsing after the final shot.

“In order to ensure a fully vaccinated force, it is U.S. Navy policy to separate all Navy service members who refuse the lawful order to receive the COVID-19 vaccination,” Vice Adm. John Nowell Jr., the chief of naval personnel, told commanders in a message dated Nov. 15.

The Navy announced last month that all unvaccinated sailors without a pending or granted exemption would be discharged and could face financial penalties. But the force at that time did not specify how sailors who see their exemption requests rejected would be treated.

None of the military branches have granted a religious exemption to the mandate, according to documents submitted to a federal court last week. Just six permanent medical exemptions had been granted to sailors, Capt. Mery-Angela Sanabria Katson said in one filing.

The overwhelming majority of Navy personnel who had not been vaccinated had not asked for an exemption, according to Katson. However, 2,375 religious exemption requests were lodged, as were a small number of medical exemption requests.

R. Davis Younts represents three Navy personnel. He said that his clients received a notice on Monday under the new guidance.

They were told they had two days to get a shot or face discharge.

The trio all entered requests for medical exemptions. None of those exemptions were processed. They were told medical exemptions were given only given to people who had an adverse reaction to a COVID-19 vaccine. They were also told that no religious exemption requests would be granted. And questions they submitted seeking to clarify the order, including asking about the availability of the approved version of Pfizer’s vaccine, weren’t answered.

“They were ignored,” Younts told The Epoch Times.

That process depends on their time in service. It’s easier for those with six or more years of total service to challenge the mandate.

Just 1 percent of active-duty Navy members have not begun a vaccination series or been fully vaccinated, officials say. That amounts to roughly 3,500 sailors.

One hundred and sixty-four deaths among Navy personnel have been attributed to COVID-19, with 144 of those dying not having been vaccinated. The vaccination status of the rest was described as “undetermined.”

Rep. Mo Brooks (R-Ala.) told The Epoch Times in an emailed statement that the military COVID-19 mandate “is a serious threat to national security” and “an affront to individual liberty and the U.S. Constitution that America’s service members so admirably defend.”

“I urge the Navy to respect the service and sacrifice of sailors by granting all requests for an exemption,” he added.

Penalties against Navy personnel who refuse a vaccine escalate over time.

Within 30 days of a refusal to get a vaccine, commanders must issue fitness reports and evaluations documenting the failure to comply with Navy readiness rules, according to the new message.

That will block officers from promotion and sailors from advancement. These personnel will not be allowed to permanently transfer, though temporary transfers may be allowed “if operational readiness and mission requirements require.” They will be allowed to re-enlist or extend. All pending agreements will be canceled. They will no longer be eligible for bonuses and special or incentive payments. Repayment will be required for unearned portions such as enlistment bonuses. And eligibility for loans for education will be lost.

The administrative discharge process is being overseen by a newly created panel called the COVID Consolidated Disposition Authority (CCDA).

“If in doubt as to how to adjudicate issues related to a Navy service member refusing the vaccine, seek guidance from your chain of command, your staff judge advocate, or the CCDA before acting,” Nowell told commanders. “In all cases, you are accountable to ensure the health and safety of your command while treating every Navy service member with dignity and respect.”