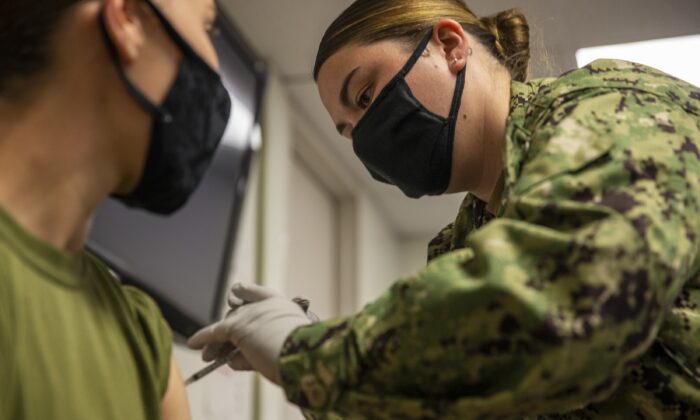 A Navy petty officer gives a Marine a COVID-19 vaccine on Camp Pendleton, Calif., on Sept. 22, 2021. (U.S. Marine Corps photo by Cpl. Andrew Cortez via The Epoch Times)
US News

U.S. Navy officials have said they won’t deploy a warship because its commander has refused to get a COVID-19 vaccine, according to court filings.

The service said an East Coast guided-missile destroyer is “out of commission” after a federal judge in Florida ruled that the Navy cannot remove the officer for being unvaccinated against COVID-19.

“With respect to Navy Commander, the Navy has lost confidence in his ability to lead and will not deploy the warship with him in command,” lawyers representing the military said in one of the documents.

The document asked an appeals court to lift an order from U.S. District Judge Steven Merryday, a George H. W. Bush nominee who on Feb. 2 barred Secretary of Defense Lloyd Austin and all other military officials from taking punitive action against the unnamed Navy officer, who has sought a religious exemption to the military’s COVID-19 vaccine mandate.

The Navy officer had been told he would be removed from command of his ship on Feb. 3 if he didn’t start a COVID-19 vaccination series.

The officer’s exemption request was rejected, and an appeal of the rejection turned town, despite the finding that his “religious beliefs are sincere and would be substantially burdened,” according to court documents. The military alleged granting the exemption would have a “detrimental effect” on military readiness.

Merryday said the commander was likely to succeed on his claim that the Navy wrongfully denied his request because “the record creates a strong inference that the services are discriminatorily and systematically denying religious exemptions without a meaningful and fair hearing and without the showing required under” federal law. The judge later turned down an emergency motion for a stay pending appeal.

When the Navy filed the appeal of that order, the warship in question was deployed at sea for a training run, Mat Staver, president of Liberty Counsel, told NTD.

“They said that the ship was not deployable and yet the Navy commander’s going to testify, in fact, he was in command of the ship deployed at sea for two-week drills,” he said.

Roger Gannam, Liberty Counsel’s assistant VP of Legal Affairs, added, “The military’s claiming ‘lost confidence’ in service members for no other reason than their ‘disobeying’ a final shot order pursuant to a federal court injunction vindicating their free exercise rights amounts to a military coup d’état against the coequal branches of the United States Government that enacted and interpreted RFRA [Religious Freedom Restoration Act] according to their respective constitutional authorities.”

In its appeal, lawyers for the government said the finding it couldn’t deploy the ship means “one of the Navy’s most versatile warships” is “out of commission during an international crisis,” appearing to refer to the Russia-Ukraine war.

Update: This report has been updated to include comments from Liberty Counsel’s assistant VP of Legal Affairs