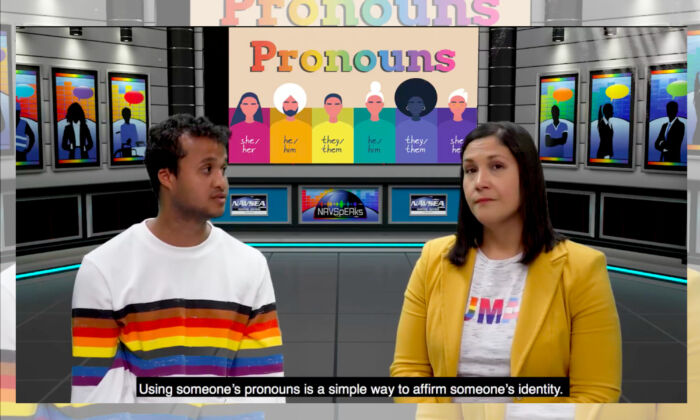 A video from the U.S. Navy that teaches sailors to cultivate a “safe space for everybody” by using pronouns that reflect one’s preferred gender identity has gone viral on social media, prompting many to question whether it has anything to do with protecting the country and winning wars.

The instructional video, which appears to take the format of a children’s show, features Jony Rozon and Conchy Vasquez, both engineers at the Naval Undersea Warfare Center in Rhode Island. It begins with the co-hosts introducing themselves by using their preferred pronouns.

“Using the right pronouns is a simple way to affirm someone’s identity,” Rozon says in the video. “It is a signal of acceptance and respect.”

The two move on to discuss the importance of using “inclusive language” to make the Navy a “safe space for everybody.” For example, “Hey everyone,” or “Hey team,” is a more inclusive alternative to “Hey guys,” according to Rozon.

“Another way that we could show that we’re allies and that we accept everybody is to maybe include our pronouns in our emails or, like we just did, introduce ourselves using our pronouns,” Vasquez says. She adds that one should never pressure others for their pronouns.

They also teach viewers how to respond when someone is “misgendered.”

“I think the first thing to recognize is that it’s not the end of the world. You correct yourself and move on, or you accept the correction and move on,” says Vasquez. “The most important thing I can tell you is do not put the burden of making you feel good about your mistake on the person that you just misgendered.”

The nearly 4-minute long video was taken a year ago, but only released this May. It is listed as an “Official U.S. Navy Video” by the Defense Visual Information Distribution Service within the Defense Media Activity, a Pentagon agency that produces and distributes news, entertainment, and educational content to U.S. forces around the world.

The video immediately drew criticism and mockery when it was posted on Monday to Twitter by Washington Free Beacon, with many users ridiculing the concept of a “safe space” in the military and expressing concerns that the Navy prioritizes woke politics over combat readiness.

“The military’s job is to kill bad guys and break things. Not this crap,” wrote Carl Higbie, a retired U.S. Navy SEAL and former adviser to President Donald Trump.

“While China is building the world’s largest navy—including the launch of a supercarrier last week—Democrats focus on Gender Studies and [Critical Race Theory] training for our military,” wrote Rep. Billy Long (R-Mo.). “China must be petrified.”

The Navy training video triggered online reactions similar to those triggered last year by an animated recruitment ad for the U.S. Army, which features an LGBT pride march as well as a lesbian wedding.

“This is the story of a soldier who operates your nation’s Patriot missile Defense Systems. It begins in California with a little girl raised by two moms,” a woman, later identified as Cpl. Emma Malonelord, says as the video begins. Emma adds that when she was six years old, “one of my moms” was left paralyzed in an accident but had managed to recover, “eventually standing at the altar to marry my other mom.”

Emma, praising her lesbian parents as “powerful role models,” says she joined the Army after college because she “needed my own adventures, my own challenge,” and “a way to prove my inner strength and maybe shatter some stereotypes along the way.”

The reaction to the cartoon ad was so overwhelmingly negative that the video’s comment section on YouTube was shut down. As of June 2022, over a year after the ad’s initial upload to YouTube, it has been viewed 4.2 million times and generated 364,000 dislikes and just 12,000 likes.

The ad’s apparent lack of masculinity traditionally associated with the Army also prompted some to create comparison videos, in which “Emma” is placed side-by-side with military recruitment ads from other countries, including Russia.

“Perhaps a woke, emasculated military is not the best idea,” Sen. Ted Cruz (R-Texas) wrote on Twitter in response to one of such videos. That video includes both “Emma” and a Russian ad that emerged on the internet around the 2014 Crimea crisis. Unlike its American counterpart, the Russian ad shows aggressive-looking men who fire bolt-action rifles, parachute from an Il-76 heavy-lift aircraft, and get their heads shaved.

“To know yourself is to know the limits of your abilities. To hell with limitations,” the narrator says in Russian. “Are you ready to break yourself, every day? Here pain makes you stronger, scars are a daily occurrence. Here you decide to prove something to yourself.”

The Epoch Times reached out to the Defense Department and Defense Media Activity for comment.