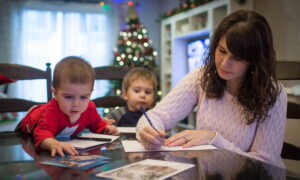 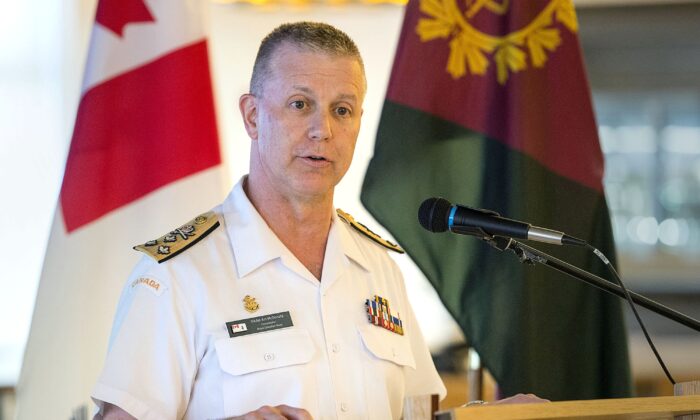 Admiral Art McDonald, then commander of the Royal Canadian Navy, gives a media briefing in Halifax on July 11, 2019. McDonald is the new chief of the defence staff, having taken over from Gen. Jonathan Vance on Jan. 14, 2020. (The Canadian Press/Andrew Vaughan)
Canada

Admiral Art McDonald, the first naval commander to lead the Canadian military in decades, will inherit some challenges in his new role, not the least of which is the ongoing effort to build a fleet of new warships, which has been fraught with delays and cost overruns.

McDonald took the reins from Gen. Jonathan Vance on Jan. 14 as the next chief of the defence staff in a ceremony that was kept low-key due to the pandemic.

Retired lieutenant-general Guy Thibault became familiar with McDonald while Thibault was vice chief of the defence staff from 2013 to 2016.

“[He’s] a very smart man, very thoughtful,” Thibault said in an interview. “I think he’s got a very nice personality, very congenial, a leader I think folks love to work with, a team player. I think those are all great skills to have.”

Rob Huebert, professor of political science at the University of Calgary, believes McDonald has the right stuff.

“Art is not only a very good manager and strategic thinker, but he is also a thinker,” Huebert said in an interview. “Given his personality, given his intellect, he’s probably one of the very best choices that we could have.”

Huebert said McDonald will face “a challenging environment” regarding the procurement of navy vessels. The six Arctic and offshore patrol ships are still being built, but new surface combatant warships and submarines must follow.

The Liberal government has earmarked $56 billion to build a fleet of 15 new surface combatant warships, but defence experts fear the final cost could be far higher. The Parliamentary Budget Officer is scheduled to deliver a cost assessment of the frigate replacement program in early 2021.

The Royal Canadian Air Force (RCAF) also has urgent needs. The government is spending billions to extend the life of its aging CF-18s and buying second-hand F-18 fighter jets from Australia until the entire Canadian fleet can be modernized, which is not expected until 2032. Meanwhile, Ottawa has contributed hundreds of millions to the development of the F-35 fighter jet to stay at the table as a prospective buyer, without having made any decision to buy F-35s to replace the CF-18s.

“I just don’t know how much longer we can go on without replacements for the CF-18s,” Huebert said. “And that has been so badly politicized, with the Liberals saying no F-35s even though almost every single one of our allies, especially our allies in NATO, have in fact gone with the F-35 with its strengths and weaknesses.”

McDonald, who turns 54 this year, is the first naval officer to command the military since 1993. He became commander of the Royal Canadian Navy (RCN) in June 2019, preceded by a long naval career that included overseeing part of Canada’s humanitarian response to the earthquake in Haiti in 2010.

Thibault, now president of the Conference of Defence Associations Institute, said McDonald’s prior tenure as commander of Maritime Forces Pacific is valuable.

“McDonald had the experience of commanding on the west coast of Canada. We often claim that we’re a Pacific nation and we’re interested in what’s going on in Asia-Pacific, but very few Canadian forces leaders actually have a lot of operational experience in that part of the world.”

The RCN was an important component of the Strong, Secure, Engaged (SSE) defence policy issued by the Liberal government in 2017. However, Huebert expects McDonald will walk a “political tightrope” with a Prime Minister’s Office that likes to micromanage but lacks a foreign policy framework that adequately addresses Russia and China.

“If they allow Admiral McDonald to bring his full skills and talents to the forefront and give him some latitude to do what SSE said it was going to do, I think that we’ll see a very successful tenure for him,” he said.

McDonald seems to align well with a Liberal government that removed “in all thy sons command” from the national anthem to make it gender-neutral. The RCN dropped the masculine term of “seaman” in favour of “sailor” in August 2020, an initiative McDonald launched.

The change was supported by over 75 percent of the more than 18,000 RCN members and members of the public who responded, but some unwelcome responses brought harsh criticism from McDonald.

“Let me be clear: Such negative and in some cases illegal sentiments and expressions are unequivocally unacceptable,” he said in a statement at the time.

“Further, those embracing them are not welcome in the RCN/CAF where we have zero tolerance for racist, anti-Semitic, misogynistic, and discriminatory behaviours of any kind in our ranks.”

Vance, who served for 39 years, including long assignments in Germany, the Balkans, and Afghanistan, announced his retirement from the Canadian Armed Forces in July 2020 after Prime Minister Justin Trudeau rejected his candidacy to become NATO’s senior military officer.

Thirty-three-year veteran Craig Baines has taken over as vice-admiral of the RCN following McDonald’s promotion.