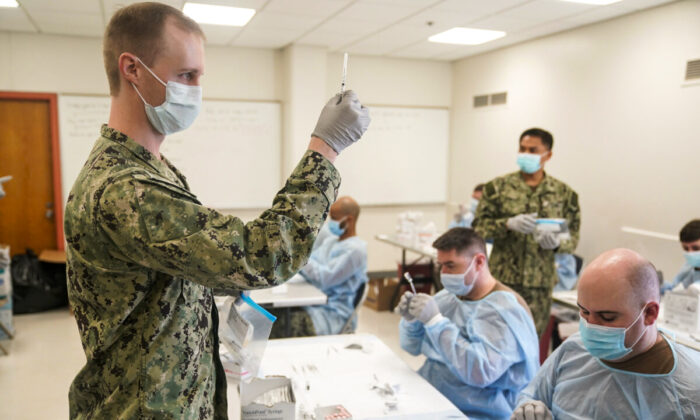 Navy personnel prepare doses of a COVID-19 vaccine at a vaccination site in New York City on Feb. 24, 2021. (Seth Wenig/Pool/AFP via Getty Images)
By J.M. Phelps

Navy Petty Officer Second Class Kristin Fregeau is being discharged from the Navy for attempted desertion, but her attorney contends that this is a cover for separating the sailor because she had a religious objection to the vaccine mandate.

“The Navy couldn’t separate [Fregeau] for vaccine refusal, so they drummed up a story about attempted desertion,” Sean Timmons, Freugeau’s attorney, told The Epoch Times.

The attempted desertion charge arose from Fregeau leaving her base for 20 days in December 2021 without prior approval.

But Timmons said the petty officer moved to Tennessee during that period to remove her child from moldy living conditions at the base that was harmful to their health.

“She moved her family under duress, and out of necessity, away from mold-infested government quarters to move her children to reasonable living accommodations,” the attorney said.

In March 2020, Fregeau was temporarily assigned to shore duty at Navy Air Logistics Office (NALO) in New Orleans where she could receive help for dealing with postpartum depression. By November 2020, she had checked herself into a hospital program for mental health issues and began to address her struggles with some success.

After returning to her previous work assignment at NALO, she began to experience mold issues at her residence. After many encounters and arguments with the housing administration, Fregeau said the ducts were cleaned and the leaking air conditioning unit was replaced.

In the months prior to the mold issue being addressed, Fregeau’s first child began having asthma-like symptoms. They subsided following the work on the home’s duct and air conditioner. But four months later, the mold—although not visible at this time—returned in the wake of Hurricane Ida in September 2021, Fregeau said.

“Our daughter became physically ill again and was not getting better,” the petty officer said. “She was coughing uncontrollably, was in a constant state of congestion and unable to sleep.”

Out of concern for her daughter’s health, Fregeau took the child to a pediatrician who advised “it was an environmental mold issue and recommended we get out of the house,” she said. Rather than going through the ordeal again dealing with housing and waiting for the mold issue to be addressed, she and her husband decided to move out.

The Fregeau family struggled to find immediate housing in the area due to Hurricane Ida. And that’s when another issue cropped up to add to Fregeau’s difficulties. In November 2021, she was denied religious accommodation for the COVID-19 vaccine mandate and the process to separate her from the Navy would begin.

According to Timmons, a “confluence of tough events” led Fregeau to act “out of necessity and under duress” in moving her family off the base.

“She moved her children to Tennessee to be with family while she sorted things out,” he said. This is what ultimately led to an alleged 20-day unauthorized absence, beginning Dec. 2, 2021.

Timmons acknowledged Fregeau should have gotten “express approval” ahead of time. Because she didn’t, he admitted, “she is culpable and at fault.” However, the attorney went on to say that service members are rarely discharged for being absent without leave (AWOL) for a couple of weeks.

“She was absent under duress, only concerned about the care, safety, and welfare of her children,” he said.

“She didn’t miss any movement, mobilization, or deployment; she missed some office work,” he added. “But now that the Navy cannot separate her for vaccine refusal, they’re putting forth this bogus pretext that she’s being separated for attempted desertion.”

Timmons argues that the elements for an unauthorized absence have not been met. Article 86 of the Uniform Code of Military Justice allows a service member to withdraw if it’s under necessity and under duress, he said, adding that “desertion requires being gone more than 30 days.”

Fregeau said, “Once I pulled myself together, I didn’t feel comfortable going back to work without any legal representation, but I wanted to make things right and return to work.” With the help of a previous attorney, she checked back into command on Dec. 20, and “it was business as usual.”

At this time, Fregeau said, “I was never sat down, and an investigation never took place to talk about any type of non-judicial punishment or anything of that sort.” However, she said, the Navy would continue the process of separating her for refusing to take the vaccine.

But since then, the Navy did go ahead with pressing for non-judicial punishment (NJP).

“I did finally receive NJP paperwork and the punishment they were trying to impose was bad-conduct discharge, forfeiture of all pay and allowances, and confinement for six months,” Fregeau said.

Following Timmons’ advice, the petty officer refused NJP. And despite a recommendation for medical retirement that would have taken effect on July 30, Fregeau is now being separated from the Navy under a general discharge with no consideration of her wellbeing, or her daughter’s health, the attorney alleged.

“It’s shedding light on what is happening to a lot of people, as they are being excessively harsh to those awaiting status for vaccine accommodation and currently protected by the injunction,” said Timmons.