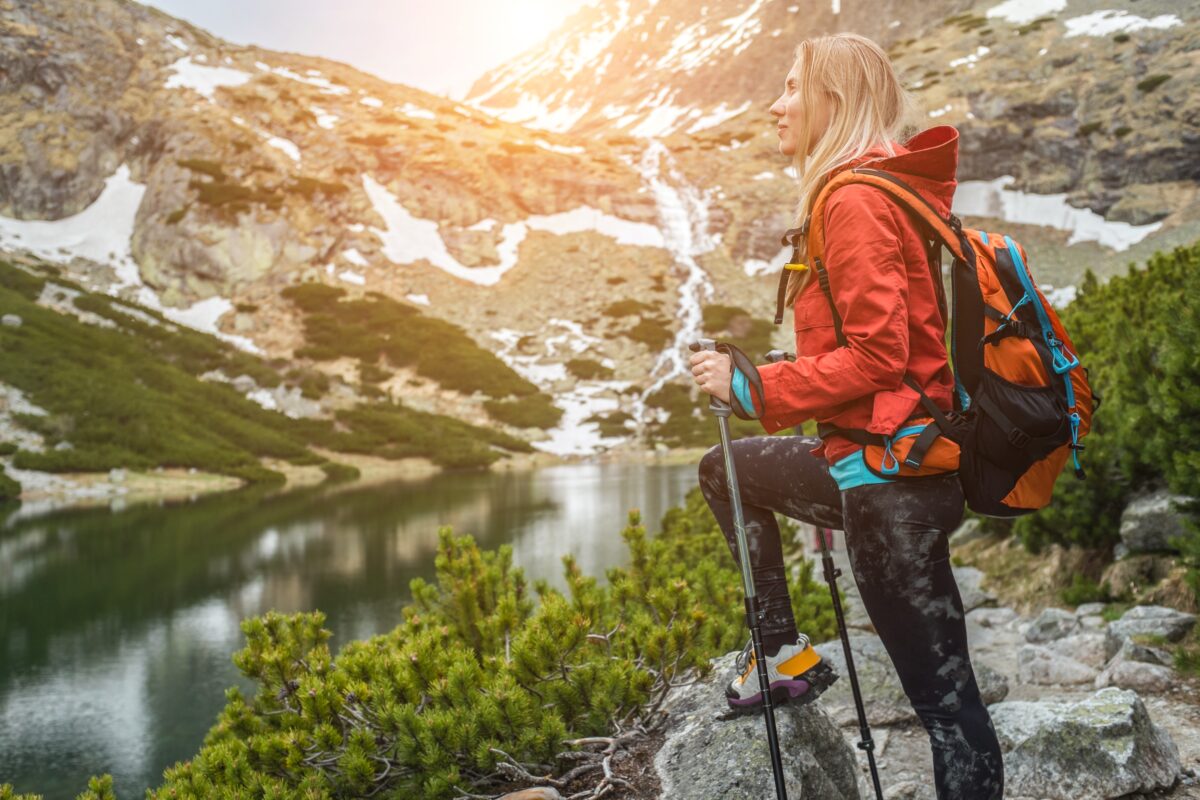 For those that have recovered from COVID, a dilemma ensues. While much of the established science says that acquired immunity is superior, vaccine mandates say otherwise. (Andrey Yurlov/Shutterstock)
Health

Science and public policy seem to disagree over which one is better
BY Jennifer Margulis TIMENovember 9, 2021 PRINT

“He’s got a pass!” said the dad sitting across from me at the airport in Bismarck, North Dakota, where we were both stranded due to flight delays. He gestured to his 5-year-old son.

“Had a slight fever and tested positive for COVID. We had to keep him home from school for a couple weeks. Then, he tested negative and was good to go. I got the vaccine. My wife did, too. But he can travel anywhere without any testing, and there’s no vaccine for his age anyway.”

Since the beginning of July in Germany, where that family lives, if you can demonstrate proof of being COVID-recovered and then have a subsequent negative COVID test, you are considered immune. For six months anyway, according to the German government.

But in the United States, where my family lives, even those who are COVID-recovered (and show high protection via either antibody or T-cell testing) are being told they also must get vaccinated. Indeed, the CDC has been actively urging Americans who have already had COVID to get the vaccine.

America’s federal and state health officials, via the mainstream media and social media, as well as on their official channels, insist that COVID vaccines offer better protection than natural immunity alone.

“If you have had COVID-19 before please still get vaccinated,” CDC Director Dr. Rochelle Walensky urged the public in that release. “Getting the vaccine is the best way to protect yourself and others around you, especially as the more contagious Delta variant spreads around the country.”

But is it really?

Despite sensationalist headlines, reinfection with COVID-19 appears to be exceedingly rare. If you are unvaccinated and have had COVID, the chances of you getting it again are slim. A preliminary report from Israeli scientists shows that out of 149,735 people in Israel with confirmed COVID-19 cases (documented via positive PCR tests) only 154 people had evidence of reinfection, which is about 1 in 1,000.

Another study, however, suggests that the chances of reinfection are even lower than 1 in 1,000. Cleveland Clinic scientists who examined a cohort of 52,238 employees found no cases of reinfection among unvaccinated people with evidence of prior SARS-Co-V-2 infections.

The same study showed that vaccinated people who hadn’t had COVID-19 had a lower risk of infection than unvaccinated people. Still, the researchers concluded that “individuals who have had SARS-CoV-2 are unlikely to benefit from COVID-19 vaccination, and vaccines can be safely prioritized to those who have not been infected before.”

The benefits of naturally acquired immunity may go beyond protection against COVID. SARS-CoV-2, the virus that causes COVID-19, is part of a family of viruses known as sarbecoviruses. Symptoms vary widely in different people, but these viruses can create severe acute respiratory syndromes that usually begin with a fever and body aches, according to the CDC.

There have been two previous SARS outbreaks. A 2003 outbreak thought to have originated in China in 2002 infected about 8,098 people and led to about 774 deaths, according to the World Health Organization. Another smaller SARS outbreak occurred in 2004.

Both of these outbreaks were self-limiting: humans managed to overcome the illnesses naturally without mass vaccination campaigns. Research on these other sarbecovirus infections is limited, but it seems that when we acquire natural immunity to these viruses, it helps protect us against future disease.

To study this, scientists in San Francisco took blood from people who had had previous COVID infections (SARS-CoV-2 and SARS-Co-V) and assessed 12 antibodies in the blood. As reported in Nature, the California researchers found that one antibody in particular (S2H97) was able to bind to a range of sarbecovirus infections and keep the viruses from spreading in lab experiments. When they tested the antibody in hamsters, it kept the rodents from getting sick.

This “super antibody,” which was acquired naturally, essentially blocked SARS viruses from spreading to other cells. While the research is being used to promote the idea of developing a broad-ranging vaccine, it also shows that there may be long-lasting benefits to natural infection.

With other infectious diseases caused by viruses, we have seen that natural infection provides longer-lasting protection than vaccine immunity. For example, a 2017 study of adults in the Czech Republic published in the scientific journal PLOS One showed that the highest protection against the measles, as measured by antibody levels in people’s blood, was in people over 50 years of age who were naturally infected before the implementation of a measles vaccine.

Other research on swine flu (H1N1) published in the Journal of Experimental Medicine in 2011, found “extraordinarily” powerful antibodies in the blood of nine people who caught the swine flu naturally and recovered from it.

Though, again, this research was showcased by news reports as evidence that it may be possible to develop a one-size-fits-all vaccine against different strains of flu viruses, what it actually demonstrates is that recovering from naturally acquired viral infections not only gives people short-term immunity against other viruses but may also be of lasting benefit in fighting off other viral infections as well.

Because SARS-CoV-2 is a novel virus and the vaccines to protect against it only became available in January, it isn’t scientifically possible to know the long-term protection offered by either the infection or the vaccines.

As more data comes in, however, it appears that even mild infection can provide robust protection from COVID-19 infection. A study from July evaluated 254 COVID-19 patients for up to eight months and found “durable broad-based immune responses,” even among COVID-recovered patients who had only mild symptoms.

Other recent data also suggests that natural immunity is long-lasting. A study from Finland published in September in the European Journal of Immunology found that in COVID-recovered patients protection against reinfection persisted for over a year.

Yet another large study from August looked at a database of 2.5 million Israelis and found that “natural immunity confers longer-lasting and stronger protection against infection, symptomatic disease and hospitalization caused by the Delta variant of SARS-CoV-2, compared to the BNT162b2 two-dose vaccine-induced immunity.”

This Israeli study found that people who were vaccinated who hadn’t been previously infected were 6 to 13 times more likely to get infected with COVID-19 than unvaccinated people who had already had the illness.

“It’s a textbook example of how natural immunity is really better than vaccination,” Charlotte Thalin, an immunology researcher and specialist in internal medicine who is based in Stockholm, Sweden, told Science.org.

Where Is The Science Behind The CDC’s Vaccine Push?

Given the natural protection provided to people who recover from COVID, why is the CDC so eager to get every eligible American vaccinated, even those who have recovered and have naturally acquired immunity?

The second CDC report, co-authored by more than 40 medical doctors and public health officials (several of whom disclose direct ties to the pharmaceutical companies manufacturing and profiting from these vaccines), looked at hospitalization rates of adults aged 65 and older. It concluded that “among adults aged 65-74 years, effectiveness of full vaccination for preventing hospitalization was 96 percent for Pfizer-BioNTech, 96 percent for Moderna, and 84 percent for Janssen COVID-19.”

The second report cited by the CDC excluded hospitalized patients who had only one dose of any COVID vaccine less than 14 days prior. It also didn’t specify if those who were vaccinated or those who were unvaccinated had a history of prior infection.

So that report sheds no light on whether vaccine immunity is more long-lasting than immunity from infection and offers no evidence to justify the idea that COVID-recovered patients should get vaccinated.

Meanwhile, much of the established science supports the superiority of acquired immunity. That fact has put some people, such as Laurie Lentz-Marino, in a difficult position as they try to balance the consequences of not complying with vaccine mandates against their understanding of what’s in the best interest of their health.

“Vaccine-induced immunity can never be as long-lasting and robust as naturally acquired immunity,” said Lentz-Marino, who taught chemistry and biology classes at Mount Holyoke College in South Hadley, Massachusetts, for more than 20 years. “The human immune system knows what it’s doing. We are an incredibly successful species. There would not be close to 8 billion people on the planet otherwise.”

Lentz-Marino, 61, recently resigned from her teaching position over vaccine and mask mandates at the college.

Jennifer Margulis, Ph.D., is an award-winning science writer and book author. A Fulbright grantee, she is also a frequent contributor to The Epoch Times. Learn more and subscribe to her free weekly newsletter at her website JenniferMargulis.net.