Natural Immunity to COVID-19 Detected at 20 Months After Infection: Study 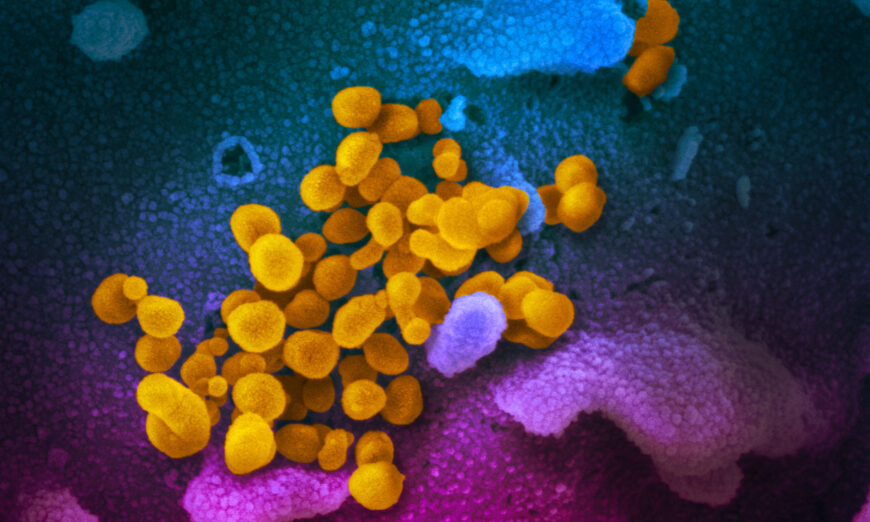 This undated electron microscope image shows SARS-CoV-2, yellow, emerging from the surface of cells, blue/pink, cultured in a laboratory. (Courtesy of NIAID-RML)

Protection against COVID-19 among the recovered was detected by researchers at 20 months post-infection, adding to the body of evidence that such protection, known as natural immunity, is long-lasting.

Researchers found antibodies against the SARS-CoV-2 spike protein receptor-binding domain (RBD) in 99 percent of study participants who had tested positive for COVID-19, with some having had the illness as long as 20 months prior.

SARS-CoV-2 is another name for the CCP (Chinese Communist Party) virus, which causes COVID-19. Antibodies are a form of protection against the virus.

The researchers, led by Dr. Dorry Segev, director of the Epidemiology Research Group in Organ Transplantation at Johns Hopkins University, put out a call for unvaccinated, healthy adults in the fall of 2021 and divided them into three groups. The first group consisted of 295 participants who had test-confirmed COVID-19 infections in the past; the second consisted of 275 participants who believed they recovered from COVID-19 but didn’t get a test; the third consisted of 246 people who didn’t think they ever had COVID-19 and had never tested positive.

In the first group, all but two of the participants tested positive for the antibodies, and there was no indication that the level of protection waned over time.

About 55 percent of the second group tested positive for anti-RBD antibodies, and the median level among those who did was lower.

The third group had the lowest percentage, 11 percent, of participants who had the antibodies, and the level among those who did was the lowest.

“The major takeaway is that natural immunity … is strong and durable,” Segev told The Epoch Times in an email.

The peer-reviewed study, which was funded by charitable donations from the Ben-Dov family, was published by the Journal of the American Medical Association.

Dr. Nasia Safdar, a professor in the Division of Infectious Disease at the University of Wisconsin’s School of Medicine and Public Health, said the results were encouraging, “but likely applicable only to a healthy adult population, with the ability and resources to go get a blood draw.”

“We are probably missing the immunocompromised, older, frail group of people where immune response may be very different than other groups,” Safdar, who wasn’t involved in the study, told The Epoch Times via email.

Dr. Jeffrey Klausner, a clinical professor of medicine at the Keck School of Medicine of the University of Southern California, said the study “confirms that those with prior infection will have detectable antibody and that antibody may be persistent for up to 20 months,” which should give people who recovered from COVID-19 confidence that they are protected and prompt officials imposing vaccine mandates to grant exceptions to the naturally immune.

“Unfortunately, still we do not know the exact level of antibody that is protective against infection versus disease or death but that matters less in the current context of living with COVID and accepting the fact that most people with prior infection or vaccination will not get seriously ill,” Klausner told The Epoch Times in an email.

The researchers who conducted the study noted that antibodies are just one measure of immunity. It remains unclear whether the anti-RBD antibodies will protect people against emerging virus variants, they said.

The Omicron variant became dominant in the United States in December 2021 and research suggests it can evade protection from vaccines and prior infection better than Delta, the strain it displaced.

Most previous studies have found that natural immunity is superior to vaccination, including while Delta was dominant. One study was backed by the U.S. Centers for Disease Control and Prevention.

A key question about the protection, though, is how long it will last. Some experts recommend people get at least one shot of a COVID-19 vaccine even if they’ve recovered from the disease due to the uncertainty, though others point to research indicating the vaccines would only give a small boost in protection to the naturally immune.

The new study was published several weeks after a different, non-peer-reviewed paper found evidence of natural immunity at 18 months past infection in a collection of vaccinated and unvaccinated people.

Segev said he and other scientists are studying how Omicron affects the naturally immune, with plans to publish results on a preprint server soon.