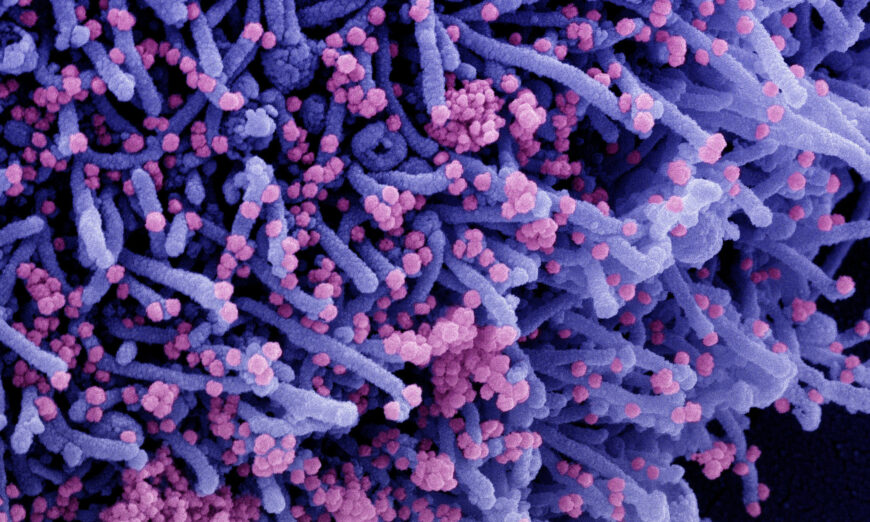 Colorized scanning electron micrograph of a cell (purple) infected with a variant strain of SARS-CoV-2 virus particles (pink), isolated from a patient sample. (NIAID via The Epoch Times)

The protection against severe illness from so-called natural immunity remains superior to that bestowed by COVID-19 vaccines, according to a new study.

People who survived COVID-19 infection and weren’t vaccinated had sky-high protection against severe or fatal COVID-19, researchers in Qatar found.

“Effectiveness of primary infection against severe, critical, or fatal COVID-19 reinfection was 97.3 percent … irrespective of the variant of primary infection or reinfection, and with no evidence for waning. Similar results were found in sub-group analyses for those ≥50 years of age,” Dr. Laith Abu-Raddad of Weill Cornell Medicine–Qatar and colleagues said after studying long-term natural immunity in unvaccinated people.

That percentage is higher than the protection from COVID-19 vaccines, according to other studies and real-world data.

Swedish researchers, for instance, found in May that two doses of a vaccine were just 54 percent effective against the Omicron variant of the CCP (Chinese Communist Party) virus, which causes COVID-19.

South African scientists, meanwhile, found the effectiveness of the AstraZeneca and Pfizer vaccines peaked at 88 percent and quickly dropped to 70 percent or lower.

The Qatar group found that natural immunity after a person’s first infection “remains very strong, with no evidence for waning, irrespective of variant, for over 14 months.”

The study was published ahead of peer review on the website medRxiv.

Few researchers have studied natural immunity long term among unvaccinated persons, in part because many of the people have eventually received a COVID-19 vaccine.

The vaccines, meanwhile, have waned against both infection and severe illness over time, triggering recommendations for booster doses, with some Americans even getting five doses within 10 months.

That strain and its subvariants are dominant in countries around the world, including the United States and Qatar.

Modeling signaled a drop to zero percent protection by 18 months, but the shielding still appears to last longer than that of vaccines, researchers said.

“Vaccine immunity against Omicron subvariants lasts for <6 months, but pre-Omicron natural immunity, … may last for just over a year,” they wrote.

Limitations of the study included differences in testing frequency among the cohorts studied, and depletion of the groups who had a COVID-19 infection, due to their deaths.