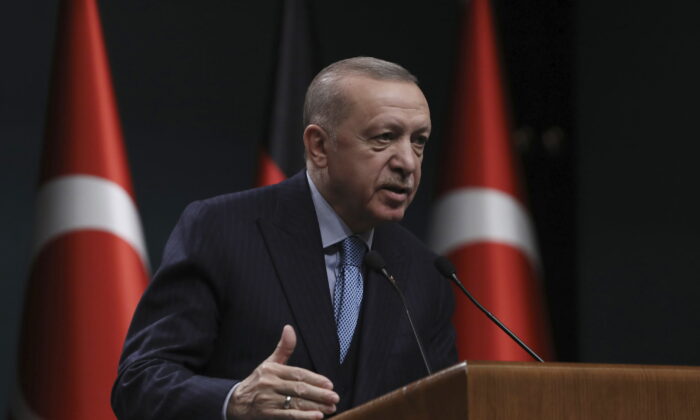 Turkey's President Recep Tayyip Erdogan speaks during a news conference, in Ankara, Turkey, on May 14, 2022. Within a two-week span, Turkey's president has caused a stir by throwing a wrench in Sweden and Finland's historic bid to join the NATO alliance, lashed out at NATO-ally Greece, and announced plans for a new incursion into Syria. (Burhan Ozbilici/AP Photo)
Viewpoints

Erdoğan personally sought peace with the PKK until he reneged on a peace agreement in 2015. At the same time, Turkish aggression and backing of jihadist groups including al-Qaida and ISIS has fueled the flow of refugees into Europe.

“Erdogan took advantage of Turkey’s important role to go back on his promises and push for his personal agenda,” human-rights lawyer and geopolitical analyst Irina Tsukerman told me.

Stockholm-based Turkish journalist Abdullah Bozkurt, who edited the independent newspaper Today’s Zaman before Erdoğan’s government closed it in 2016, sees domestic considerations in the Turkish president’s interference and a desire to influence the Biden administration. Bozkurt noted that Erdoğan even asked the jailed leader of the PKK to write a letter endorsing Erdoğan’s campaign for president in the last election.

“The real message he was trying to send to the Biden administration was that he wants to sit around the table and negotiate with them,” Bozkurt told me, noting that Erdoğan likely wants help to stop the upcoming trial of Halkbank, a Turkish state bank, that builds on the earlier Hakan Atilla/Reza Zarrab case that showed the bank was allegedly involved in helping Iran evade sanctions by laundering money through the U.S. financial system.

“He is hoping to put pressure on the Biden administration that they will interfere in the judicial process and hush up, like he did in Turkey, the case,” Bozkurt said.

Erdoğan fears being directly implicated in the case because he allegedly personally approved using Halkbank to move funds on Iran’s behalf, Bozkurt said.

Turkish Foreign Minister Mevlut Casuvoglu last month raised the issue with Secretary of State Antony Blinken, claiming that Halkbank that Atilla worked for was a Turkish-government bank and was immune from U.S. law. President Joe Biden snubbed Erdoğan last fall during the opening of the U.N. General Assembly, and Turkey’s president hopes to get attention from Biden by holding up Swedish and Finnish accession into NATO, Bozkurt said.

“He has to play that relationship [with the United States] to the Turkish public and say, ‘I’m a leader that can do a deal here and there with very powerful figures in the world,” Bozkurt said. “He doesn’t care at all about the PKK; Erdoğan would bargain with the Devil for all he cares.”

He dismisses rhetoric about the PKK and Gülenists as “packaging,” because Sweden cannot offer anything of value.

Former Syrian opposition figure Kamal al-Labwani, who worked with the Turks in the past and likewise lives in Sweden, agrees. Sweden’s Left Party includes PKK supporters according to al-Labwani.

“He is mainly interested in this elections in 2023, and he will not go far because of the reconciliation between him and the Turkish deep state, which resulted in rapprochement with most of the countries of the region and the West,” al-Labwani told me.

NATO’s Turkey problem is one of its own creation. The alliance worried more about using Turkey as a foil against Russia, particularly following the 2014 invasion of eastern Ukraine and annexation of Crimea, than Turkey’s nefarious actions. It needs Turkish support to keep the strategic Bosporus strait closed under the 1936 Montreux Convention and keep the Russian Black Sea Fleet bottled up in the Black Sea.

NATO looked the other way while Erdoğan purged the Turkish armed forces of pro-NATO secularist officers and replaced them with Islamist and ultra-nationalists over the past decade. Erdoğan abolished critical media just like Vladimir Putin. Our NATO ally supports the SADAT paramilitary organization that spreads jihadism across the Islamic world, not unlike Russia’s Wagner paramilitary group that acts on behalf of Putin’s interests. It militarily threatens neighboring fellow NATO member Greece and has repeatedly invaded Syria. Blinken warned Turkey against further military operations in Syria on June 1. Kurdish activists accuse Ankara of systematic ethnic cleansing.

Turkish agents have abducted followers of exiled Turkish Muslim cleric Fethullah Gülen from around the world and brought them back to Turkey in the wake of the July 2016 “false-flag” coup attempt. Gülen and his followers have been strong opponents of Erdoğan’s policies.

Erdoğan has played both sides of the fence with Russia for the past decade. On one side there was the Turkey that shot down a Russian jet in 2015 and sold Ukraine the Bayraktar drones manufactured by a company owned by Erdoğan’s son-in-law. On the other hand, you had the Turkey that went out of its way to annoy its NATO partners by purchasing the formidable Russian S-400 anti-aircraft missile system.

The alliance helped enable the development of the current impasse by turning a blind eye to Turkey’s covert backing of ISIS and al-Qaida jihadists that necessitated the use of Kurdish fighters to push back ISIS. Turkish National Intelligence (MIT) helped tens of thousands of al-Qaida and later ISIS jihadists cross its territory to fight in Syria and also trained them. NATO also helped create the refugee flow from Syria by arming and supporting the uprising against Assad starting in 2011. NATO aircraft reportedly ferried Libyan arms to Turkey from Libya starting in late 2011 with covert support from the Obama administration.

“Turkey’s antidemocratic nature isn’t just a bad look for an alliance that claims to be grounded in democratic principles. It also undermines NATO’s security. Turkey wields its veto within the alliance like a cudgel, slamming its allies on unrelated issues to punish it for not validating Erdoğan’s obsession with punishing the Kurds. Erdoğan is in it for what Erdoğan wants — and that frequently doesn’t align with the alliance’s interest and security,” former U.S. diplomat Elizabeth Shackelford wrote in the Chicago Tribune.

The alliance’s charter makes it impossible for it to suspend or expel a member; consequently, Erdoğan believes he can act with impunity and hold the alliance hostage. Kurdish activist Hadi Elis accuses NATO of being anti-Kurdish.

“[It] acts in accordance with Turkish policies against Iraqi and Syrian Kurds,” Elis told me. “[The] Western coalition … started putting distance between themselves and Kurds, because Turkey was using all trade and other ties to give them hard times. No one wanted to confront Turkey’s anti-Kurdish policies.”

It’s time the alliance took a stand against Turkey’s bad behavior, especially now that the Turks are threatening their third invasion of Syria in eight years. The West has relied on Syria’s PKK-linked People’s Defense Units (YPG in Kurdish) to keep ISIS in check. The YPG-led Syrian Democratic Forces (SDF) warn that ISIS is coming back in Syria, and a Turkish invasion would only destabilize and oppress the Kurds and Syriac Christians who live in the proposed buffer area along Turkey’s border with Syria.

The commander of Kurdish forces said he would turn to the Assad regime should Turkey invade.

“The justifications for appeasing Erdogan have never served NATO well, and made it more difficult to constrain other rogue actors and to retain credibility on human rights,” Tsukerman said.

It ought also to bring urgency to finding a negotiated settlement to Turkey’s war on the Kurdish minority in the eastern part of the country and make it a European priority. Businesses, non-profit foundations, religious entities, and banks linked with Erdoğan and his military aggression should be cut off from the global economy. And Turkey should be reminded that NATO members can just as easily give the Kurds the ability to defend themselves against Turkish aggression as Ukraine has been defended against Russian aggression in an effort to get it to cease and desist.