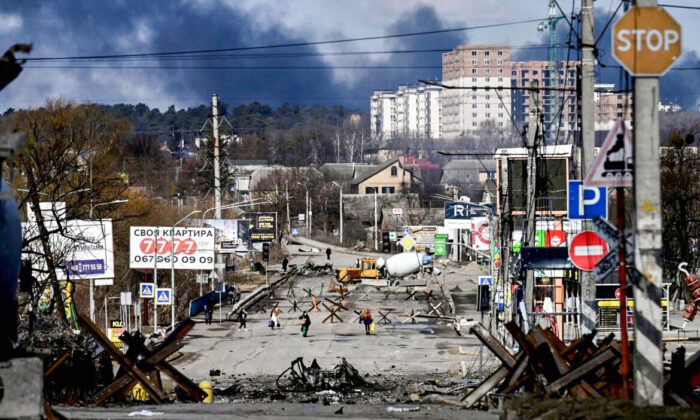 The use of chemical weapons by Russia would “totally change the nature of the conflict” in Ukraine, said NATO Secretary Jens Stoltenberg on Wednesday.

Without elaborating, Stoltenberg told reporters that using such weapons would be a “blatant violation of international law and of far-reaching consequences.” He didn’t elaborate.

Since the start of the Feb. 24 conflict, there have been no reports or evidence suggesting Moscow has used chemical weapons in Ukraine. However, in recent days, top Western officials have continually claimed that Russia is aiming to do so in the near future, although no evidence has been produced.

Ahead of a NATO summit in Brussels, President Joe Biden told reporters that he believes “it’s a real threat” that Russia would use the weapons. Meanwhile, Russian officials have made accusations that Kyiv is seeking to use or develop chemical or biological weapons against Russia.

On Wednesday, during a United Nations meeting, Russian deputy U.N. Ambassador Dmitry Polyanskiy said troops “have never planned or carried out strikes against any Ukrainian facilities where toxic substances are stored or produced.” He instead blamed Ukrainian nationalist groups for trying to stage a false-flag attack.

“It is clear that the Ukrainian nationalist authorities, encouraged by the Western countries will stop at nothing to intimidate its own people and stage false flag attacks to accuse Russia,” Polyanskiy said.

“Another evidence of phosphorus bombs used by [R]ussian invaders,” he said.

During an interview with CNN, Kremlin spokesperson Dmitry Peskov said that Moscow could potentially use a nuclear weapon if Russia faces an “existential threat.” Several days after the launch of the invasion, Russian President Vladimir Putin announced he would place his nuclear readiness forces on high alert after Western countries and the United States issued punishing sanctions against Russia.

While in Europe, Biden’s first stop is Brussels, where he’ll attend back-to-back-to-back meetings. NATO is holding a hastily arranged emergency summit where Biden is expected to reiterate his support for Article 5 of the alliance’s charter, which commits all members to collective defense if any are attacked.

“I think the meeting of all heads of state and government in NATO will provide us with yet another platform to demonstrate our unity, our support to Ukraine, but also our readiness to protect and defend all NATO allies,” Stoltenberg told NBC’s “Meet the Press” on Sunday. “And by sending that message, we are preventing an escalation of the conflict to a full-fledged war between NATO and Russia.”