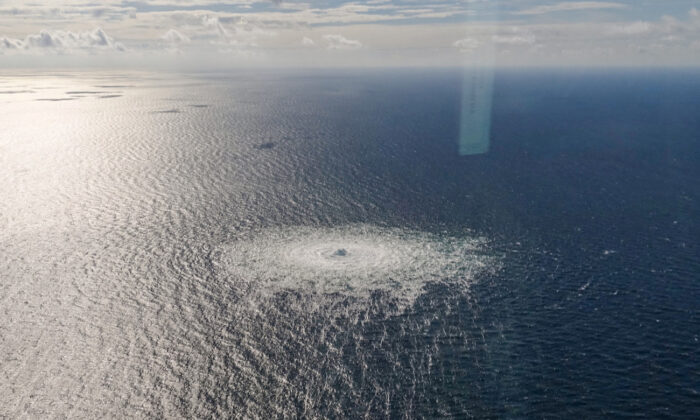 A gas leak from the Nord Stream 2 pipeline, as seen from the Danish F-16 interceptor in Bornholm, Denmark, on Sept. 27, 2022. (Danish Defence Command/Forsvaret Ritzau Scanpix/via Reuters)

Using a language, tone, and tenor not seen in many years, the North Atlantic Treaty Organization (NATO) released a statement on the damage to the Nord Stream pipelines in the Baltic Sea. In the release, NATO cites that willful sabotage was the likely cause, but didn’t affix blame on a nation or group. Voice of America added the interpretation that NATO “vowed retaliation” over this episode.

The situation is fraught with questions of motive, intent, and capability of the perpetrators. Much of this evolving situation doesn’t make sense, and more must be revealed to fully understand the who, how, and why of this dramatic event.

The Nord Stream 1 and 2 pipelines have been prominently in the news since the beginning of the conflict in Ukraine. Inexplicably, Europe continues to consume vast quantities of Russian gas and oil, while reducing their domestic energy options and declining to seek expanded energy options from the United States.

The Nord Stream pipelines are the most efficient and direct ways for Russia to provide gas to Germany. Nord Stream 1 has been in operation since 2011. Nord Stream 2, which doubles the capacity, was subject to opposition from the Trump administration, while the Biden administration caused considerable confusion by waiving sanctions against this pipeline in May 2021. As the Ukrainian conflict began to develop in February, President Joe Biden made comments about stopping Nord Stream 2 if necessary.

The breaks in the two pipelines (now apparently at four locations) appear to be to the southeast and northeast of Bornholm, a Danish island to the east of Denmark, in between Sweden and Poland, and at the point where both pipelines turn to the southwest in their final run to Germany.

The force of each blast that is thought to have damaged the pipelines was estimated at more than 1,000 pounds of explosives, based on seismic readings. For comparative purposes, that’s the equivalent of four large aircraft-dropped bombs (which is likely beyond the ability of scuba divers to transport and place).

The waters where the breaks occurred appear to be in the 200- to 300-foot range. The depths of the last leg of the pipelines as they turn toward Germany from Bornholm are much shallower, and the preponderance of the Baltic Sea traffic transiting the area seems to run on the north/northwest side of Bornholm, according to the Baltic Sea traffic system.

Remotely operated undersea drones have become routine for any construction, inspection, or recovery below shallow scuba depth. These are often deployed by nondescript, oceangoing work vessels to support commercial, scientific, or military projects.

Recently (in August and September), the USS Kearsarge amphibious ready group (ARG) was in the Baltic Sea. This naval task force conducted operations with Finnish forces and visited the three Baltic countries of Estonia, Latvia, and Lithuania. Then, the Kearsarge ARG conducted training with Swedish military units, and it just recently exited the Baltic, going right past Bornholm and the area of the sabotage, and appears to currently be somewhere around Great Britain.

The USS Kearsarge is essentially a medium-sized aircraft carrier, in other words, a very large warship. The Russians have a large enclave in Kaliningrad on the Baltic coast (between Poland and Lithuania) and come to high alert when NATO surges resources in the Baltic.

Kaliningrad has been held by the Russians since the end of World War II. The Russians consider this enclave both sacred (they have vowed to always occupy this cut-off region due to the perception that this is the historic birthplace of Prussianism) as well as strategic, and they allegedly keep nuclear missiles here, a sore point with NATO.

The Russians become agitated whenever NATO projects military forces around Kaliningrad. The NATO surge of forces, essentially simultaneously with the Nord Stream attacks, adds to the questions around this episode.

There are clearly more questions than answers now, and more are likely to emerge from the high-stakes drama unfolding in the Baltic.

John Mills
Col. (Ret.) John Mills is a national security professional with service in five eras: Cold War, Peace Dividend, War on Terror, World in Chaos, and now—Great Power Competition. He is the former director of cybersecurity policy, strategy, and international affairs at the Department of Defense. Mills is a senior fellow at the Center for Security Policy.