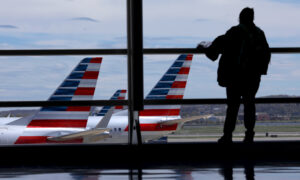 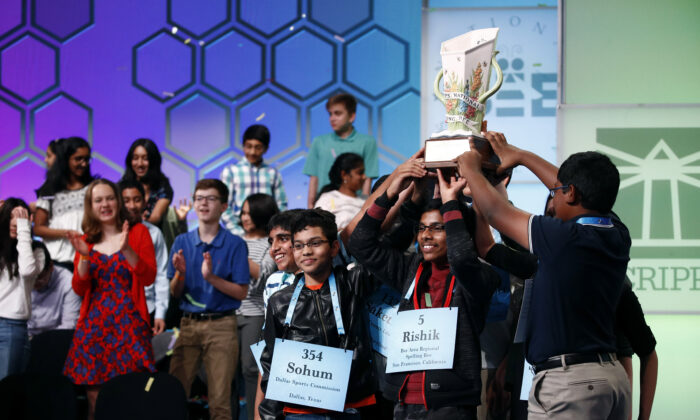 Eight co-champions celebrate after winning the Scripps National Spelling Bee, in National Harbor, Md., on May 31, 2019. (Patrick Semansky/AP)
US News

There will be no fidgeting at the National Spelling Bee microphone, no banter with pronouncer Jacques Bailly, no pointed questions about definitions of languages of origin, and no dreaded bell that signals a misspelled word.

This year’s finals of the Scripps National Spelling Bee have been canceled, the latest beloved public event to be scrapped because of the coronavirus pandemic.

The bee will return next year, Scripps said, but that’s little comfort to the eighth-graders who are missing out on their last shot at the national stage. Scripps won’t change eligibility requirements for the next bee, which is scheduled for June 1-3, 2021.

The bee, which began in 1925 and was last canceled from 1943-45 because of World War II, has always been restricted to elementary and middle-schoolers.

“I’m totally shattered and devastated,” said 14-year-old Navneeth Murali of Edison, New Jersey, who would have been among the favorites at this year’s bee. “Spelling has basically been my life for so many years. … I put all my effort into the chance of winning Scripps, and this morning, I found out it was all gone.”

Navneeth’s father, Murali Samu, and other parents of eighth-graders said Scripps should find a way to allow them to compete, either by holding a smaller, invitation-only bee this year or by letting select ninth-graders return in 2021.

Scripps has no such plans, at least for now.

“My heart goes out to every one of those kids affected. As a former speller, all I can say is I can only imagine, and my heart breaks for them,” said Paige Kimble, the bee’s longtime executive director, and the 1981 champion. “Our eighth-grade spellers are much like the class of 2020 high school seniors, in the ranks of much-enduring heartbreak as a result of these pandemic circumstances.”

Scripps had announced in March that the bee wouldn’t be held as scheduled the week of May 24 at its longtime venue, a convention center outside Washington. Hundreds of kids compete every year in the national finals, which are televised by ESPN, and Scripps was aiming this year for a field of around 400.

“The Bee has determined there is no clear path to safely set a new date in 2020,” Scripps said in a statement, noting “uncertainty around when public gatherings will be possible or advisable.”

Kimble and the bee staff had left open the possibility of holding a virtual bee, but they concluded it would be too difficult logistically and would not be true to the spirit of the competition.

“The Scripps National Spelling Bee is an in-person live event, the same way that a basketball game is or a football game or a soccer game or a tennis match,” Kimble said. “It’s just not something that can be effectively transferred to the virtual world.”

The 2019 finals ended in an unprecedented eight-way tie after Scripps ran out of words tough enough to challenge the best spellers. This year’s competition would have included Simone Kaplan, the last speller eliminated before the so-called “octo-champs” were declared.

Simone, a 14-year-old from Davie, Florida, was still studying for hours each day after the postponement was announced.

“I didn’t want ‘tettigoniid’ to be the end of the story,” Simone said, referring to the word she misspelled in 2019.

Simone’s mother, Alana Kaplan, said that if Scripps can change the rules to allow eight champions, it ought to find a way for this year’s eighth-graders to compete again.

In the meantime, Simone, Navneeth and other top spellers will compete in an online bee conducted by SpellPundit on the same dates as the vacated Scripps bee. It offers a $2,500 cash prize to the winner—a pittance compared to the Scripps prize of $50,000—but it may be the closest this year’s eighth-graders get to a national title.

Nothing can replace the in-person bee, though.

“I really wanted to enjoy Bee Week this year — my last chance at it. My journey started in first grade whenever I went to watch my brother compete,” said 13-year-old Hepzibah Sujoe of Fort Worth, Texas, whose older brother, Ansun Sujoe, was a 2014 co-champion.

“I really wanted to win because I saw that I did have the potential to win and I really pushed for it this year. Now that I can’t do that, that’s probably the toughest thing.”