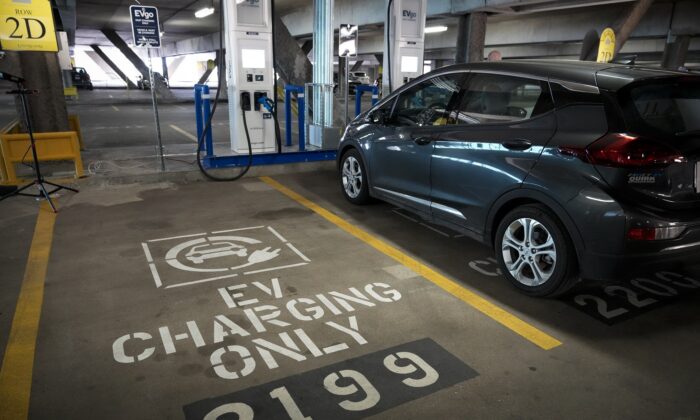 President Joe Biden wants half of all new cars and trucks sold by 2030 in the United States to be electric vehicles (EV), but the success of the program depends mainly on China, according to a national security expert.

“Encouraging EV adoption while we still rely on China for batteries risks granting Beijing a lot of leverage.”

Biden signed an executive order establishing the 50 percent EVs target during an Aug. 5 ceremony at the White House, with support from top executives from GM, Ford Motor Co., and Stellantis N.V., which owns Chrysler, Dodge, Jeep, and Ram.

Only 2.7 percent of U.S. vehicle sales in July were EVs, which require lithium-ion batteries to produce performance and range that are comparable to current cars and trucks powered by internal combustion engines using fossil fuels.

“Since China controls so much of the battery supply chain, couldn’t they choose to slow down or cut off supplies, if it were in the CCP’s interest?” asked Schadlow, who is now a senior fellow at the Hudson Institute. She served in the White House under President Donald Trump.

“Disruptions in technology supply chains can have major strategic implications. Look at how the slowdown in the microchip supply has had a ripple effect on the automotive industry.”

She was referring to the crippling effects of shortages in the past year of the computer microchips that control engine performance, airbags, and other vital functions in passenger cars and trucks. The shortages—which occurred for a variety of reasons—have cost automakers billions of dollars in lost sales and production.

“One could imagine a situation in which China chooses to slow things down to hamper U.S. EV goals. There are plenty of levers in the supply chain it could move,” Schadlow said.

Schadlow said there are multiple ways available to Chinese policymakers to delay or even starve the Biden program should it choose to do so, including, for example, requiring that EVs sold on the Chinese market use only batteries made in China.

“Such a move has precedent. From 2015 to 2019, Beijing required that foreign EV manufacturers buy batteries from Chinese production plants like CATL,” she said. China’s Contemporary Amperex Technology Co. (CATL) is the world’s leading supplier of lithium-ion batteries for EVs.

The Chinese firm announced on July 29 that it has developed a sodium-ion battery that uses no lithium, cobalt, or nickel, three elements required in all lithium-ion batteries. There are also child-labor challenges for U.S. automakers in cobalt mining.

Schadlow said that “China has been very strategic about using the interdependence and transparency of globalization as a first step toward gaining control of key supply chains in a variety of domains.”

China was aided in such efforts by the fact it has such a huge consumer market, which Western firms have long sought to reach, thus providing Beijing with tremendous leverage to negotiate technology transfer agreements that benefit the Chinese economy and bolster its military strength, Schadlow noted.

Biden launched his EV program with an executive order, but the effort will require congressional funding support in the future. Republicans are almost uniformly opposed to the Biden initiative, but some Democrats have reservations about it as well.

Sen. Joe Manchin (D-W.V.), for example, has been extremely critical of the shift to EVs, telling a June congressional hearing earlier this year that, “I really do have great concerns about our country going to the EV that is totally dependent on foreign supply chains.”

With the Senate split 50-50 between Republicans and Democrats, Manchin’s worries about foreign supply chains could be problematic for the Biden EV effort.

The chief concern among congressional Republicans isn’t shifting to EVs but rather the inevitable dependence upon China and the economic benefits that would result for Beijing.

Iowa is a major producer of corn, which can also be used in the production of hydrogen. That element could be an alternative to electricity as the transportation fuel of choice in the future.

“As people struggle to stretch their last dollar to afford reliable transportation amid rising gasoline prices, this administration is now asserting more control over the vehicles we drive to work, take our children to school, and live our lives,” she said.

“It’s unfair to people whose car is not a luxury but a necessity. It’s also a radical push for electric vehicles that will make America more dependent on Chinese supply chains and hurt our global competitive edge.”

Jack Heretik, Rodgers’s spokesman, told The Epoch Times on Aug. 10 that she is “a big supporter of an all-of-the-above energy strategy, including hydrogen.” She co-sponsors the Clean Energy Hydrogen Innovation Act that is part of a cleaner energy package proposed by the committee’s Republicans.