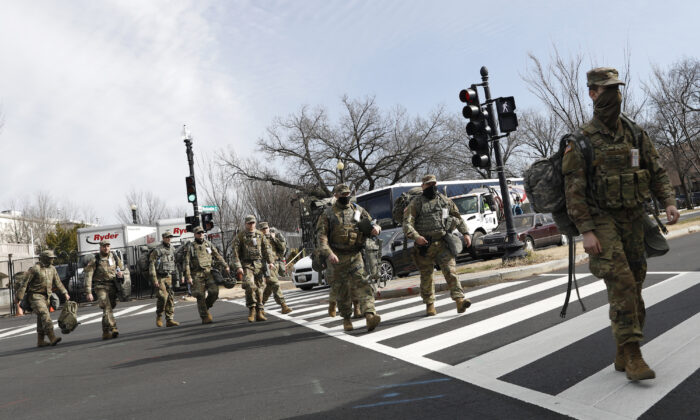 National Guard troops who were “banished” to a parking garage after being asked to leave parts of the U.S. Capitol, have since been allowed back in, officials said.

After being deployed to reinforce security efforts in the capital ahead of President Joe Biden’s inauguration, thousands of National Guard members were told they could no longer access parts of the U.S. Capitol Complex, including a Senate office cafeteria used as a rest area, a move first reported by Politico.

Murphy told CBS News that, at around 3 p.m. on Thursday, U.S. Capitol Police asked that soldiers using Capitol hallways and open spaces to rest during their shifts be relocated.

“As Congress is in session and increased foot traffic and business is being conducted, Capitol Police asked the troops to move their rest area,” Murphy told the outlet. “They were temporarily relocated to the Thurgood Marshall Judicial Center garage with heat and restroom facilities,” Murphy added.

One National Guard soldier told Military Times that, “we were in the Thurgood Marshall Judicial Center parking garage and they kicked us out of that parking garage to make us walk half a mile away to the Hart Senate Office Building parking garage where we can’t be seen.”

Lawmakers from both parties condemned relegating the Guardsmen to parking facilities.

Sen. Bill Cassidy (R-La.) wrote in a tweet that, “it is completely unacceptable that our brave National Guard troops be treated this way. This must be fixed immediately.”

One of the lawmakers who had expressed outrage and said National Guard members could use her office, Sen. Tammy Duckworth (D – Ill.), wrote in a tweet that she had been informed that “Capitol Police have apologized to the Guardsmen and they will be allowed back into the complex tonight.”

“Update: Troops are now all out of the garage. Now I can go to bed,” she wrote in a follow-up tweet.

U.S. Capitol Police said in a statement issued to ABC on Thursday that the department “immensely appreciates the integral support of the U.S. National Guard in helping to secure the Capitol Complex leading up to, and including the Inaugural ceremony. The Department is grateful for their service and our strong partnership during this time.”

A request for comment sent to the U.S. Capitol Police by The Epoch Times remained unanswered by publication.