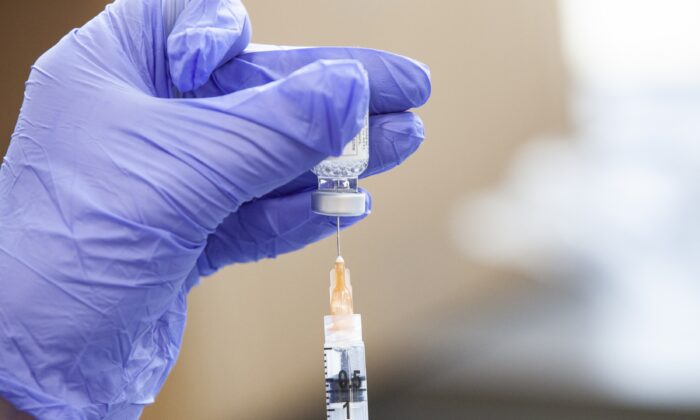 A COVID-19 vaccine is prepared in a file image. (Stephen Zenner/Getty Images)
By Zachary Stieber

The incident took place in late 2021.

During a vaccination clinic where both flu and COVID-19 vaccines were being administered, “three service members were accidently given a COVID vaccine,” Maj. Carl Lamb, a spokesman for the Maine National Guard, told The Epoch Times in an email.

Mathew Bouchard, who is no longer with the Guard, has identified himself as one of the members.

Bouchard said he was ordered to receive an annual flu vaccine and went to the clinic to get that vaccine. He verified his name, date of birth, and part of his social security number, and told officials at the clinic he was there for the flu vaccine. But he was injected with a dose of a messenger RNA COVID-19 vaccine, officials told him.

“‘You know how you went in for the flu shot? Well, that wasn’t a flu shot. That was a COVID-19 vaccine,'” Bouchard told The Epoch Times, recounting the meeting with superiors.

“I think, in my mind, at that point, it was like, I completely didn’t know if I trusted any people in the military,” he added.

Each branch of the military ordered members to get vaccinated, after Defense Secretary Lloyd Austin, a Biden appointee, in August of 2021 directed them to do so.

Under federal law, medical and religious exemptions can be sought. The military has been using form letters with striking similarities to deny many religious exemption requests, federal judges have found, and several branches are blocked from taking punitive action against religious objectors.

Bouchard says he was pursuing a religious exemption due to his Christian faith when he was injected with a vaccine against his will. At the time, he only had several months left before his enlistment was over.

Bouchard believes the vaccine mixup was intentional, noting how the military has aggressively tried to pressure members to get vaccinated. The purpose would be to get members to re-enlist, he thinks.

“I think what they did was they thought soldiers who don’t want it and they accidentally get it are just going to come around and continue their service. So I feel like that was a way to vaccinate people,” Bouchard said.

According to the Maine National Guard, an investigation was conducted into the situation and no additional incidents have been reported.

“The inquiry determined the incident was accidental. The Maine National Guard has not, and would never purposefully administer a COVID vaccine in place of an influenza vaccine,” the Guard spokesman said.

But Bouchard and his lawyer, R. Davis Younts, says that he was never interviewed by investigators.

“Why didn’t they at least call him and talk to him and say, ‘Hey, what happened that day?'” Younts wondered.

While the military is protected from lawsuits by sovereign immunity, the fact that multiple members were given a COVID-19 vaccine raises concerns and Bouchard hopes what happened will be investigated by the Department of Defense’s inspector general, which recently found that the military is likely violating federal law in its treatment of religious objectors.

Correction: A previous version of this article identified the guardsman with the wrong name. His name is Mathew Bouchard. The Epoch Times regrets the error.