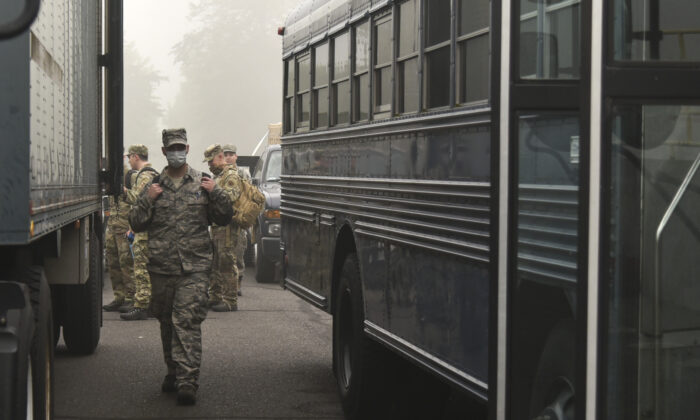 National Guard Deployed in Massachusetts to Take Children to School

The Massachusetts National Guard has been activated in several cities to help take children to school amid a shortage of bus drivers.

“The Governor’s order makes up to 250 personnel available. Beginning with training on Tuesday, 90 Guard members will prepare for service in Chelsea, Lawrence, Lowell, and Lynn,” Gov. Charlie Baker’s office said in a Sept. 13 statement. “These Guard personnel will be available to serve as drivers of school transport vans known as 7D vehicles to address staffing shortages in certain districts.”

Baker’s statement noted that “as with any school transportation worker, all activated Guard personnel will complete vehicle training to ensure the safety of children and families,” while the drivers will meet requirements for 7D drivers. “Throughout the mission, the Guard will comply with all health and safety measures.”

Lowell Public Schools Superintendent Joel D. Boyd said in a statement that the district will be assigned 15 National Guard members who will be able to drive children by the end of this week.

“This relationship will continue until we can fill all of our buses and vans with permanent school bus drivers,” Boyd said.

And 15 Guard members will be sent to Chelsea, according to Chelsea Public Schools Superintendent Almi G. Abeyta, who noted that they’ll be in uniform and unarmed.

“This will ensure that students are picked up for school on time and returned home on time, so that they can have a productive day in school,” Abeyta said.

Earlier in 2021, the head of Massachusetts’ largest bus transportation provider warned that he was down by about 10 percent of his workforce.

“I’ve been doing this for 33 years, and I haven’t seen anything like this,” John McCarthy, the chief executive of NRT Bus, told WGBH in August.

When schools were shut down during the COVID-19 pandemic, reports stated that bus drivers had to find other work. Additionally, according to ride-hailing service HopSkipDrive, many bus drivers are retirees, which means they might be more fearful of COVID-19.

National Guard deployments, as of 2020, appear to be more commonplace. Earlier in 2021, thousands of Guard members were deployed to the U.S. Capitol in Washington following the Jan. 6 breach, while numerous states deployed their National Guards to provide security amid riots, looting, arson incidents, and protests during summer 2020.

The National Guard activated more troops on duty in 2020 than any time since the end of World War II, officials with the military branch said in December 2020.