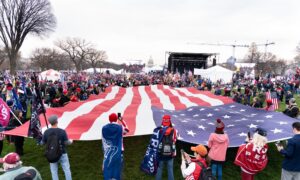 More than 300 District of Columbia National Guardsmen will be in Washington this week to help support police officers patrolling protests scheduled by supporters of President Donald Trump.

“We have received confirmation that the D.C. National Guard will be assisting the Metropolitan Police Department, beginning tomorrow through the life cycle of this event,” Metropolitan Police Chief Robert Contee III told reporters at a press conference on Jan. 4.

National Guard personnel will be assisting police officers from Jan. 5 to 7 with crowd management and traffic control, freeing officers “to focus on anyone who’s intent on instigating, agitating, or participating in violence in our city,” he added.

Bowser said guardsmen wouldn’t be armed and wouldn’t be involved in domestic surveillance, searches, or seizures of Americans.

The DC National Guard said in a statement that 340 personnel were activated. Members will support the city’s government “by providing crowd control at several Metro stations and assist police with street closures at multiple intersections to provide safety in and around pedestrian areas.”

Pro-Trump ralliers plan on gathering in Washington this week to protest during the counting of electoral votes. The main locations police expect people to gather are the U.S. Capitol, Freedom Plaza, and the Ellipse near the White House.

Bowser noted that two pro-Trump protests late last year devolved into violence. In both instances, most violence appeared to be perpetrated by left-wing agitators, but pro-Trump ralliers, including members of the conservative Proud Boys group, were filmed brawling as well.

“With respect to any particular group, it really doesn’t matter to me which group or which individuals, what we are particularly focused on is individuals that are engaged in violent behavior, whoever they might be,” Contee said.

Pamela Smith, a deputy chief with the U.S. Park Police, told reporters that officers “will not tolerate any sense of violence.” The park police will be working with D.C. police officers, she said.

Intelligence that authorities have obtained suggests the size of the crowd will be bigger than the protests that took place in November and December 2020.

Enrique Tarrio, head of the Proud Boys, said on Parler recently that members would be in Washington on Jan. 6 but wouldn’t be wearing their traditional black and yellow outfits.

“We will be incognito and we will spread across downtown DC in smaller teams,” he wrote.

Tarrio was later arrested and told not to attend protests this week.

The Harrington Hotel, where Proud Boys members often stay and congregate, announced last month that it will be closed Jan. 4 to Jan. 6.

Other groups linked to violence at previous protests, including Black Lives Matter, plan to turn out this week. Refuse Fascism called on people to go to the city, saying the protests “must not go unopposed.”

Bowser on Jan. 3 asked Washingtonians and those who live in the region to avoid the downtown area on both Jan. 5 and Jan. 6. People shouldn’t “engage with demonstrators who come to our city seeking confrontation, and we will do what we must to ensure all who attend remain peaceful,” she said.

People are allowed to protest in Washington but authorities won’t allow them “to incite violence,” Bowser said on Jan. 4.

Contee said signs have been posted around the city emphasizing that it’s illegal to possess firearms on the U.S. Capitol grounds and in National Park Service areas; the District of Columbia also doesn’t recognize concealed carry permits issued by other jurisdictions. Authorities have seen indications that some people plan on carrying guns when they travel to Washington this week.

In response, Metropolitan police officers are going to work to quickly identify and arrest them.

The U.S. Capitol Police said in a statement that it “has comprehensive security plans in place and we continuously monitor and assess new and emerging threats, with the overall goal of keeping those within the Capitol Complex safe and secure.”