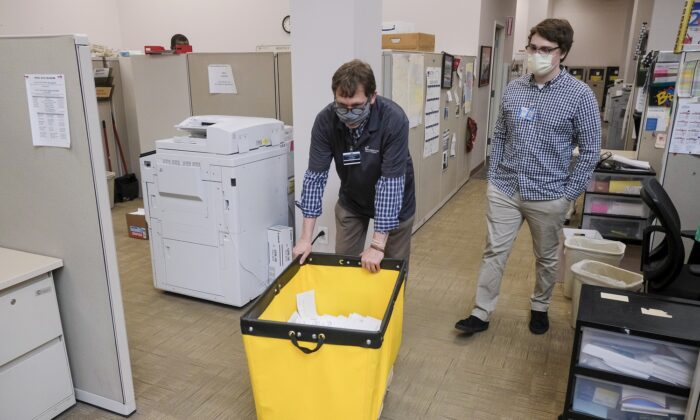 A staff member of the Franklin County Board of Elections sorts through and de-stubs both mail in ballots and provisional ballots on April 28, 2020, in Columbus, Ohio. (Matthew Hatcher/Getty Images)
Politics

Citing the current public health emergency, Democratic officials in Minnesota have decided to bypass a state law requiring absentee ballots to be accompanied by the signature of a witness, a move that critics say opens the door to voter fraud.

Minnesota is a battleground state this year after President Donald Trump, a Republican, came much closer to victory in the deep-blue state in 2016 than almost all election handicappers thought possible, losing to Democrat Hillary Clinton by just 1.5 percentage points, or 44,765 votes, out of close to 3 million ballots cast.

This administrative action, which comes as Republican complaints about the dangers of widespread mail-in voting grow louder, is taking place after a state judge gave it her blessing but a federal judge refused to do so, in what has been described as friendly or collusive litigation.

Minnesota Secretary of State Steve Simon felt empowered to waive the provision in state law that requires absentee ballots to be witnessed, a move critics say creates opportunities for voter fraud, due to a decision by a state judge.

On June 17, Ramsey County District Judge Sara Grewing approved a consent decree in friendly litigation against the witness requirement that was filed by the Minnesota Alliance for Retired Americans Educational Fund.

Democrat lawyer Marc Elias of Perkins Coie, who has been leading a nationwide effort to institutionalize voting-by-mail, is acting in the case. A key argument presented during the case, which is cited as LaRose v. Simon, was that making people vote in person increased the possibility of the transmission of the CCP virus.

In her decision, Grewing noted that the plaintiffs were “challenging the constitutionality and enforcement of Minnesota’s requirement that each mail-in ballot be witnessed by a registered Minnesota voter, a notary, or person otherwise authorized to administer oaths,” but acknowledged the parties had agreed to settle the matter.

The ruling affects only the primary elections, not the general elections in November.

A few days later, a similar lawsuit with the same legal objective filed by the left-leaning League of Women Voters (LWV) fell flat in federal court in Minnesota, after the Trump campaign legally intervened in the case.

On June 23, U.S. District Judge Eric Tostrud rejected the consent decree offered by the LWV, telling the group to draft a narrower settlement agreement that deals with the specific harms claimed in the lawsuit.

The judge said the draft consent decree went “well beyond” the concerns raised by a voter who claimed her health could be jeopardized by having to comply with the witness requirement to vote during the current pandemic, according to The Star Tribune, based in Minneapolis.

The parties in the suit haven’t demonstrated the need for “wholesale nonenforcement” of the witness requirement, Tostrud reportedly said. He wasn’t clear about the fate of the lawsuit, saying, “There are many possibilities.”

Simon’s spokeswoman said the state will rely on the favorable state-level court decision and dispense with the witness requirement contained in the state statute.

“We are bound by the ruling of the state district court and will comply with the order, which means two things: Minnesotans who vote absentee will not be required to provide a witness signature on their ballot for the August 11 primary. Additionally, ballots postmarked by Primary Election Day will be accepted up to two days after Primary Election Day.”

The lawsuits at hand were brought by pro-Democratic groups against Simon, an outspoken left-wing Democrat. This kind of friendly litigation, called “collusive litigation,” “sue and settle,” and “lawfare,” by its critics, has become increasingly common in recent years as a means of changing the law without going the traditional route of asking legislatures to change the law.

“It happens all the time,” John Hinderaker, president of the Minnesota-based think tank Center of the American Experiment, told The Epoch Times.

The lawsuits are also part of a nationwide push by the Democratic Party and left-leaning activist groups to make voting-by-mail, which experts say is prone to tampering and fraud, the preferred method, or in some cases, the sole method of casting election ballots.

Democrats are now suing in at least 13 states to overturn restrictions on mail-in voting—and more lawsuits are promised, as The Epoch Times previously reported.

Voting-by-mail, or “voting at home,” as U.S. House Speaker Nancy Pelosi, a Democrat, has called it, is better than risking one’s health by voting in person while the CCP virus continues to stalk the land, the Democrats argue.

“It looks to me like the Democrats had several irons in the fire,” he said.

Christian Adams, president of the Indianapolis-based Public Interest Legal Foundation (PILF) and a former U.S. Department of Justice civil rights attorney, said the lawsuit by the League of Women Voters was typical behavior for it.

“The same thing happened in Virginia. The LWV are also trying to keep dead voters on the rolls in Detroit and are opposing PILF in our lawsuit there as intervenors. So they work both sides—collusive plaintiffs and intervenor defendants of a broken system. That’s what the LWV has degraded to.”

“Because of MAIL-IN BALLOTS, 2020 will be the most RIGGED Election in our nations history – unless this stupidity is ended,” Trump wrote on Twitter on June 22. “We voted [in person] during World War One & World War Two with no problem, but now they are using Covid in order to cheat by using Mail-Ins!”

“Right now, a foreign country could print up tens of thousands of counterfeit ballots, and [it would] be very hard for us to detect which was the right and which was the wrong ballot,” he said.

“The consensus, among people who study fraud carefully, is that voting by mail is a much more fertile area for fraud than voting in person,” Charles Stewart, the Kenan Sahin distinguished professor of political science at the Massachusetts Institute of Technology, told NPR in 2018.

A bipartisan commission chaired by former President Jimmy Carter and former Secretary of State James A. Baker III found in 2005 that “absentee ballots remain the largest source of potential voter fraud” and that “vote buying schemes are far more difficult to detect when citizens vote by mail.”

Neither the Trump campaign nor the League of Women Voters could be reached immediately for comment.