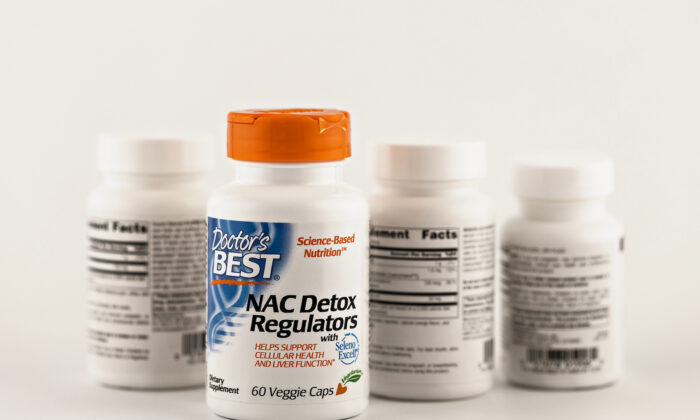 N-acetylcysteine (NAC) has a long history of use to help prevent liver damage, and more recently as a treatment for flu viruses. Now researchers have discovered its lifesaving value for COVID-19.

N-acetylcysteine (NAC) is a precursor to reduced glutathione, which appears to play a crucial role in COVID-19. According to an April 2020 literature analysis, glutathione deficiency may be associated with COVID-19 severity, leading the author to conclude that NAC may be useful both for its prevention and treatment.

NAC has a long history of use as a first-aid remedy for acetaminophen poisoning. It neutralizes the toxic effects of the drug by recharging glutathione, thereby preventing liver damage. But the idea that NAC can also be helpful against viral infections is not new. Previous studies have found it reduces viral replication of certain viruses, including the influenza virus.

In one such study, the number needed to treat (NNT) was 0.5, which means for every two people treated with NAC, one will be protected against symptomatic influenza. That’s significantly better than influenza vaccines, which have an NNV (number needed to vaccinate) of 71, meaning 71 people must be vaccinated to prevent a single case of confirmed influenza. It’s even better than vitamin D, which has an NNT of 33.

In the MedCram lecture above, pulmonologist Dr. Roger Seheult reviews the latest medical literature on NAC for COVID-19, starting with a paper published in the October 2020 issue of Clinical Immunology titled “Therapeutic Blockade of Inflammation in Severe COVID-19 Infection With Intravenous N-acetylcysteine.”

Researchers have confirmed that in severe COVID-19 cases, cytokines such as interleukin-6 (IL6), interleukin-10 (IL10) and TNF-ɑ are all elevated. Once they reach excessive levels, a so-called cytokine storm develops, causing significant tissue damage. NAC may be able to inhibit this damaging cascade.

In the “Therapeutic Blockade of Inflammation in Severe COVID-19 Infection With Intravenous N-acetylcysteine” paper, the researchers focus on a specific group of patients, namely those with glucose 6-phosphate dehydrogenase (G6PD) deficiency, which has been shown to facilitate human coronavirus infection due to the fact that G6PD depletes glutathione.

G6PD deficiency is a genetic disorder that typically affects males and is more prevalent among Black men and those from the Mediterranean area, Africa and Asia. (Women with this genetic anomaly are carriers and can pass it on to their children but rarely display symptoms.)

G6PD is an enzyme needed for the proper function of red blood cells. It also protects your red blood cells from free radicals in your blood by limiting oxidative stress.

When your body doesn’t produce enough of this enzyme, hemolytic anemia — a condition in which red blood cells are broken down faster than they are made — can result due to unneutralized oxidative stress from insufficient amounts of NADPH being produced.

As noted in “Therapeutic Blockade of Inflammation in Severe COVID-19 Infection With Intravenous N-acetylcysteine”:

We describe a severe case of COVID-19 infection in a G6PD-deficient patient treated with hydroxychloroquine who benefited from intravenous (IV) NAC beyond reversal of hemolysis.

NAC blocked hemolysis and elevation of liver enzymes, C-reactive protein (CRP), and ferritin and allowed removal from respirator and veno-venous extracorporeal membrane oxygenator and full recovery of the G6PD-deficient patient.”

In his lecture, Seheult goes through the nitty-gritty details of how G6PD influences the COVID-19 disease process, why a deficiency in this enzyme can worsen outcomes and how NAC supplementation short-circuits this harmful chain of events.

In summary, hydrogen peroxide (H2O2), a reactive oxygen species (ROS), needs to be converted to water (H2O) as much as possible in your cells to avoid red blood cell hemolysis, i.e., the destruction of red blood cells.

As noted by Seheult, there’s concern that the drug hydroxychloroquine may increase this process in G6PD-deficient patients, thereby increasing the risk of red blood cell hemolysis.

The evidence is not conclusive, however. One 2018 study looking at the incidence of hemolytic anemia in G6PD-deficient patients given hydroxychloroquine concluded the risk may be overblown, as “There were no reported episodes of hemolysis in more than 700 months of HCQ exposure among the 11 G6PDH-deficient patients.”

To recycle GSSG back to its reduced form, GSH, you need an enzyme called GSH reductase. The reducing agent needed for this to occur is NADPH. NADPH is also simultaneously converted into NADP+. To recycle NADP+ back to NADPH, you need G6PD.

The point here is this: Patients who have G6PD deficiency will also have lower NADPH, and therefore won’t be able to reduce the GSSG (the oxidated form of glutathione) to its reduced GSH form. This in turn leads to a buildup of hydrogen peroxide, resulting in higher levels of hemolysis.

As explained by Seheult, the two building blocks of glutathione are NAC and the amino acid glycine. Glycine is fairly abundant, whereas NAC is not, so the theory is that, if you are G6PD deficient, you may be able to bypass this detrimental spiral by supplying high levels of NAC. This will allow your body to produce its own glutathione (GSH).

This theory is what was investigated in “Therapeutic Blockade of Inflammation in Severe COVID-19 Infection With Intravenous N-acetylcysteine,” and the answer is yes. When given hydroxychloroquine, the G6PD-deficient patient developed severe hemolysis, which was successfully reversed by giving intravenous NAC. In the end, the patient fully recovered.

As for the dosage, the G6PD-deficient patient was given 30,000 milligrams of intravenous NAC divided into three doses over 24 hours, after which the patient began showing immediate improvement in hemolysis indices. About a week later, IV NAC was restarted at a dose of 600 mg every 12 hours for one week.

In addition to that G6PD-deficient patient, NAC was also given to nine other COVID-19 patients who were on respirators but did not have G6PD deficiency. In these patients, “NAC elicited clinical improvement and markedly reduced CRP in all patients and ferritin in 9/10 patients.” The authors hypothesize that NAC’s mechanism of action “may involve the blockade of viral infection and the ensuing cytokine storm.”

That said, they point out that it’s difficult to discern whether these anti-inflammatory effects were specific to the use of NAC, as steroids and other anti-inflammatory drugs were sporadically used. Still, they believe NAC does have the ability to reduce inflammation in patients with COVID-19. As explained in the paper:

IL-6, the primary cytokine that drives inflammation in COVID-19 infected patients, elicits mitochondrial oxidative stress at complex I of the mitochondrial electron transport chain (ETC). In turn, this leads to redox-dependent activation of mTORC1.

Acting outside the cell, NAC may break disulfide bonds within ACE2 that serves as the cellular receptor for COVID-19. NAC may also block COVID-19 binding by disrupting disulfide bind within its receptor-binding domain …

Several anti-inflammatory medications have been shown to mitigate the cytokine storm in COVID-19 infection, such as corticosteroids, colchicine, imatinib, and complement C3 inhibitor AMY-101. However, the safety of mTOR blockade stands out based on its propensity to extend overall lifespan.

Importantly, NAC may also protect against other problems associated with COVID-19, including the hypercoagulation that can result in stroke and/or blood clots that impair the ability to exchange oxygen in the lungs.

Many COVID-19 patients experience serious blood clots, and NAC counteracts hypercoagulation, as it has both anticoagulant and platelet-inhibiting properties. A 2017 paper also found NAC has potent thrombolytic effects, meaning it breaks down blood clots once they’ve formed.

This is largely thanks to the sulfur in NAC (from cysteine). The sulfur reduces the intrachain disulfide bonds by von Willebrand factors that have polymerized by dissociating the sulfur bonds holding them together, thus contributing to the clot. Once von Willebrand factor sulfur bonds are broken, the clots start to dissolve and the blood vessels open up again allowing for exchange of oxygen and carbon dioxide.

According to the authors, “NAC is an effective and safe alternative to currently available antithrombotic agents to restore vessel patency after arterial occlusion.” (Restoring vessel patency means the blood vessel is now unobstructed so that blood can flow freely.) Two additional papers show the same thing.

“High-dose intravenous NAC may be expected to play an adjuvant role in the treatment of severe COVID-19 cases and in the control of its lethal complications … including pulmonary and cardiovascular adverse events.” ~ FASEB Journal August 11, 2020

Importantly, NAC’s mechanism of action does not appear to increase bleeding disorders like heparin does, so it would likely be a safer alternative to the heparin used in the MATH+ protocol.

Studies have also demonstrated that NAC helps improve a variety of lung-related problems, including pneumonia and ARDS, both of which are common characteristics of COVID-19. For example:

Standard of Care for COVID-19 Should Include NAC

Considering many COVID-19 cases involve blood clots in addition to excessive oxidative stress, and NAC effectively addresses both, I believe NAC should be included in standard of care for COVID-19. As noted in “Rationale for the Use of N-acetylcysteine in Both Prevention and Adjuvant Therapy of COVID-19,” published August 11, 2020, in the FASEB Journal:

“COVID-19 may cause pneumonia, acute respiratory distress syndrome, cardiovascular alterations, and multiple organ failure, which have been ascribed to a cytokine storm, a systemic inflammatory response, and an attack by the immune system. Moreover, an oxidative stress imbalance has been demonstrated to occur in COVID-19 patients.

N- Acetyl-L-cysteine (NAC) is a precursor of reduced glutathione (GSH). Due to its tolerability, this pleiotropic drug has been proposed not only as a mucolytic agent, but also as a preventive/therapeutic agent in a variety of disorders involving GSH depletion and oxidative stress …

Thiols block the angiotensin-converting enzyme 2 thereby hampering penetration of SARS-CoV-2 into cells. Based on a broad range of antioxidant and anti-inflammatory mechanisms … the oral administration of NAC is likely to attenuate the risk of developing COVID-19, as it was previously demonstrated for influenza and influenza-like illnesses.

Moreover, high-dose intravenous NAC may be expected to play an adjuvant role in the treatment of severe COVID-19 cases and in the control of its lethal complications … including pulmonary and cardiovascular adverse events.”

In the same vein, an even more recent paper, published in the October 2020 issue of Medical Hypotheses, points out that:

In vivo, in vitro, and human clinical trials have demonstrated N-acetylcysteine (NAC) as an effective method of improving redox status, especially when under oxidative stress.

Mediation of the viral load could occur through NAC’s ability to increase cellular redox status via maximizing the rate limiting step of glutathione synthesis, and thereby potentially decreasing the effects of virally induced oxidative stress and cell death.

We hypothesize that NAC could act as a potential therapeutic agent in the treatment of COVID-19 through a variety of potential mechanisms, including increasing glutathione, improving T cell response, and modulating inflammation.”