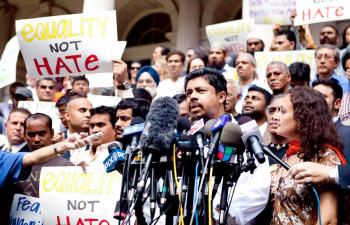 Ahmed H. Sharif, taxi driver and victim of a hate crime speaks about the incident at a rally in front of the City Hall on Thursday. (The Epoch Times)
US

"This attack runs counter to everything that New Yorkers believe, no matter what God we may pray to,” said Bloomberg on Wednesday, when he first met with Sharif. “I want to thank the men and women of the NYPD for their quick response in apprehending the suspect who was arrested and charged with attempted murder as a hate crime.”

The rally on the steps of City Hall following the meeting on Thursday included Sharif, representatives from immigrant organizations and communities, Taxi-Limo Deputy Commissioner Conan S. Freud, and board members of the New York Taxi Workers Alliance.

Taxi driver Sharif, 43, was attacked by passenger and college student Michael Enright, 21, around 6 p.m. on Tuesday in Midtown. A film student, Enright first asked the driver if he was a Muslim, and after aggressive talk with negative remarks on Sharif's religion, Enright reached through the opened partition window with a knife in his hand and slashed across Sharif's neck.

“He suddenly attacked my neck from the back,” said Sharif, who showed off scars on his neck and arm.

“I have been driving a taxi more than 15 years. All my four kids were born here. I never felt this hopeless and insecure before,” said Sharif in a statement.

Aliya Latif, Civil Rights director of the Council on American-Islamic Relations said, “The vicious and deliberate attack on Mr. Sharif on account of his religion shocks the conscious.”

The Taxi Driver Protection Act sponsored by Sen. Eric Adams was passed two months ago. Bhairavi Desai, a founding member of the NYTWA, of which Sharif and many other Muslim taxi drivers are members, urged Gov. David Paterson to put the legislation into actions as soon as possible to prevent more taxi drivers in New York from violent racial and religious assaults.

“We need every single piece of protection that is available to taxi drivers in New York City,” said Desai. “We have been waiting for two months for the governor to sign on the Taxi Driver Protection Act. Once that act becomes a law, there will be a sign in the back that says ‘Warning! An Assault on a Taxi Driver is Punishable up to 25 Years in Prison.’”

Both speakers felt the recent debate over the proposed mosque at ground zero has stirred up unnecessary hatred toward Muslim immigrants in America.

“Hate speech may lead to hate crimes, especially when there is constant vilification of Muslims in talk radio, in newspapers, and [the] Internet,” said Latif.

“We feel very strongly that the debate has been so out of hand that there has been so much fear-mongering, so much ignorance, and so much misinformation,” said Desai. “We feel that the politicians who have chosen to stay silent on this issue sent out the message that not all New Yorkers are equally protected.”